The Theater of the Apocalypse Returns: Now With Photos!

I got my camera back, much to my surprise.

Not that I thought somebody had stolen it, mind you. This is Wisconsin after all, and a 4H event to boot. You could probably leave loose diamonds out on the table and somebody would turn them in to the lost and found. It’s a nice place to live that way.

No, the problem with getting the camera back was that both Home Campus, where this event took place, and the 4H program in general are state institutions, and all of us had a mandatory furlough day today. So nobody was in yesterday, and nobody was in today, and there’s events tomorrow that I really wanted my camera for and the air just had bones and life was sad and deflated. Fortunately a friend found my camera and rather than put it into a lost and found she put it on Kim’s desk down at Home Campus.

So there are now pictures.

I didn’t take any pictures during the actual performance, as it was dark – most of the play took place while Mother Owl refused to wake the sun, which meant that not only were the house lights out but the stage lights were only up at around 30% - and I was busy videotaping it anyway.

But I did get a nice picture of our board operator beforehand. 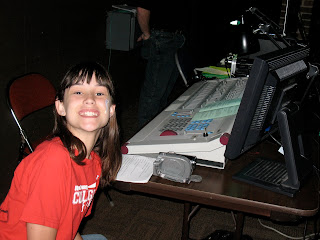 And as you can see, the award our troop got for stage makeup was fully deserved. 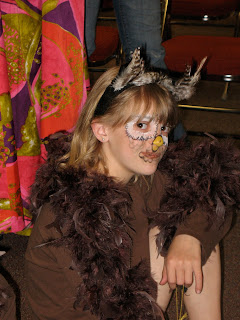 It was a happy crew all around. 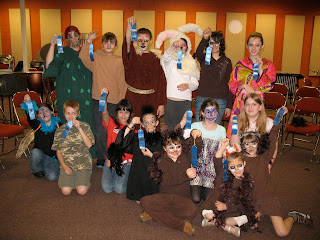