The number of the day was 5. As in, “I spent five hours today down at the Kids Museum in the Rather Larger Town south of us.”

Or perhaps the number of the day was 60, which was the number of second-graders that were on this trip, three of whom – Lauren and her friends Claire and Mackenzie – were my own special responsibility. This was on top of the two other elementary schools that I noticed that were having similar field trips while we were there. The lunch area was just hopping.

It is also possible that the number of the day could well have been 80, which would have been the proof of the beverage I felt I deserved afterward and might yet enjoy responsibly now that everyone is safe in their beds.

For you see, keeping track of three second-graders in a museum full of exhibits designed to draw children in from across the room is not easy, as they are being drawn to any number of exhibits at any given time and are thus prone to vibrate uncontrollably before shooting off in random directions. Separate random directions, which is not what it says we’re supposed to encourage in the Big Book O’ Chaperoning that every parent gets when they sign their kids up for these field trips.

Have you ever tried to keep track of three small children in a place like that? Now you know what particle physicists go through at those atom smashing places they like to build, monitoring the velocity and direction of tiny things shooting off at odd angles and hoping that whatever results isn’t the end of anybody’s world.

But this is why you sign up for this gig – the chance to be a part of their lives, to give back to the schools and communities they’re part of, to let your kids know that they are important enough that you would set aside the rest of your tasks for a day and hang around a museum with them, even if it means you get whiplash from tracking them all.

Because whiplash heals. And kids grow older. And days at the museum are there to be treasured, one by one as they come up. 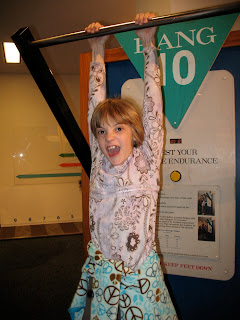