It was recital time yesterday in Our Little Town, and there was beautiful music to be made.

Every spring the girls’ music teacher holds a recital for all of her charges – they practice a piece or two, she rents a small hall, and the parents bring goodies for afterward. We’ve been doing this for a few years now, and it’s a nice little tradition.

This year there were a couple of new wrinkles adding to the uncertainty.

On Tabitha’s side, she outgrew her violin this spring so we traded in the half-sized model for a full-sized model. Did you know that a half-sized violin is not actually half the size of a full-sized violin? I know. It’s true. We went back to the same guy who sold us the first one and he fitted her out for a new one and even took the old one back for trade-in. He also let us keep the old one for a while, since we figured that switching violins a week before a concert was probably not wise.

Tabitha, however, decided that she loved this new violin (“Benjamin,” by name) and worked to get her piece up and ready on it, to the satisfaction of her teacher. And in truth, it does have a nicer tone – fuller, rounder, and generally more pleasant. It’s just a matter of space – there’s only so much tone you can get out of a smaller instrument.

Lauren’s wrinkle was that this spring she decided that she was old enough not to need my help with her practicing. On the one hand this meant that practicing got a lot easier for me, as all I had to do was say, “Lauren, go practice!” five or six times and it would get done. On the other hand, it did mean that she was on her own for correcting misconceptions.

But fear not, for I bring tidings of great music.

We arrived early, cookies, girls and violin in hand (the place comes with a piano) and milled about until it was time for the show. Eventually music started and the program worked its way down to us, and off they went.

Both Lauren and Tabitha did a nice job, it must be said. 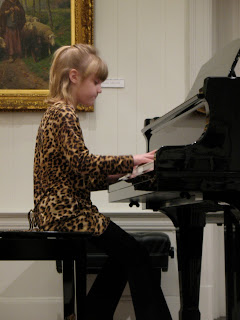 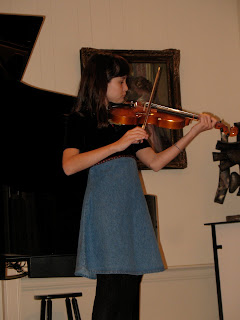 But you know what impressed me more than how well they did? They both made fairly big mistakes in their pieces, as sometimes happens, but they both covered them and kept right on playing – I doubt anyone other than me and their teacher really knew what had happened. And that, more than anything else, is the definition of performance success.
Posted by David at 9:50 PM

I really enjoyed you post. I'm sure their experience will enhance your daughters enjoyment of music for years to come.

And now, to go off topic.

In yesterday's election in Canada the Conservative government managed to pull off a majority government. This isn't a huge surprise, just a disappointment (I like minority governments, they can't get much accomplished which seems to be a good thing). What is more interesting is that the New Democrat Party (NDP), the socialists, got 102 seats out of 308.

This is huge news! The NDP is the party that supports trade unions. Really supports them, not like the American Democrats. In 2004 they had 19 seats which is historically more typical for them.

I know that Canadian politics don't influence Americans much, but maybe there is some hope for you folks as well.

There was a time when I followed Canadian politics, but with all the nonsense going on in Wisconsin I have had a hard time following American politics in general over the last few months. It would be nice to have hope here in the US, but I have to say that I'm not feeling it these days. Too many signs pointing in the wrong direction and too many people celebrating the signs.

The girls did have a good time with the music, though, and sometimes that's all that matters.

While we're off topic, here's news from the left in France. The Socialist's best hope for beating Sarkozy is taking a US paid vacation in Riker's Island. Apparently, the man doesn't know how to treat women.