Holes In Their Heads

I am now a minority in my own house.

Of course, this is nothing new. I’m the only non-native midwesterner, the only one who thinks the Three Stooges are funny, and the only one even including the cats who has a Y chromosome. My guess is those last two are related, though the first one stands on its own.

My latest foray into minorityhood came on Saturday, when Tabitha came bouncing up to me to announce that she and Kim were going off to the mall to get her ears pierced.

Now, I had no particular objection to this. I’m not one of those parents who finds such things to be the latest sign of the apocalypse. I look for such portents in our politics these days and am frankly overwhelmed by them to the point where looking for them elsewhere seems gratuitous. I will admit that I thought 11 was a bit young for such things, but Tabitha is a responsible young woman and more girls in her class have pierced ears than not.

I will admit that I was a bit skeptical about how my eldest child, who has more than inherited my phobia of needles, would fare. But since Kim was the one going to the mall with her, I filed that on the large and ever-growing pile of things labeled “Not My Problem” and moved on.

Ninety minutes later, they were back.

Tabitha had apparently done a magnificent job of not panicking (which we plan to use against her for every scheduled shot in every doctor’s appointment for the rest of her life), there were two shining new cubic zirconia stuck in her head, and Lauren was eager for her turn. 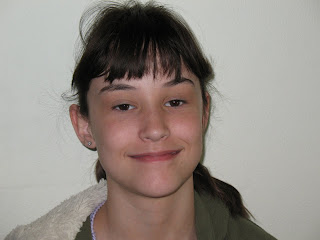 Now, I found that I was in fact one of those parents when it came to Lauren, who is 8 these days, but not by much. As long as she’s willing to put in the effort of taking care of them – dabbing them with cleaner three times a day, I suppose I can live with it.

It’s not a moral decision, in other words. So many things in life are not moral decisions, and the world is a much simpler place for recognizing that.

So back they went – Kim, Tabitha and now Lauren – and back they came, two daughters with matching cubic zirconium earrings. 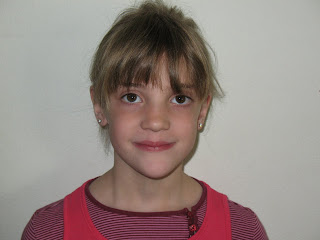 They were very excited and very happy.

I’m not really sure why having holes punched in your head would make you happy, but then I am not a pre-teen girl either.

And three cheers for that.
Posted by David at 5:47 PM