Turns out it was a good move to get the Christmas lights up when I did. I do not do ladder work in the snow.

We got our first real snowstorm last night, here in Baja Canada – four inches of the good stuff. This just barely qualified as worth shoveling by Wisconsin standards, but since it was the inaugural run of the season the air was filled with the sound of snowblower engines early this morning. One thing I’ve learned since moving to Our Little Town is that one should never get between a small town man and an excuse to use something with a two-cycle engine.

Another is that you’d better get with that program if you want to fit in with the neighbors.

And so there I was as well, cheerfully plowing through the snow with my little machine, waving to the other guys on the block in manly small town solidarity. I’d better be careful, though. Could lead to deer hunting.

Of course the girls were just ecstatic about the whole thing, even though the storm kept getting cut back from the eight inches it was initially announced to be. It was snow, it covered the ground, and that was good enough. 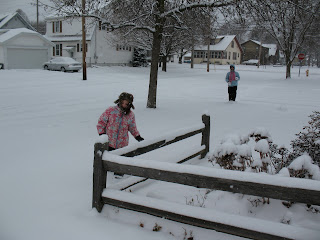 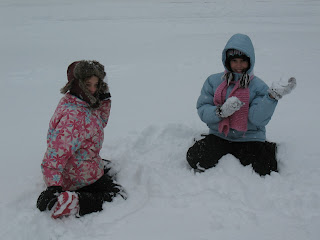 We usually lose sight of the lawn around this time of year. It will reappear sometime in March, in all likelihood, ready to make further demands on this indoorsman’s time. But until then I can ignore it and let the Christmas lights bathe the snow in peaceful blue.
Posted by David at 6:41 PM

On December 8th we got five inches in five hours and the city went to hell.
On the 16th we were supposed to get four more inches. I caught a glimpse of tanks fitted with snowplows in the news. "In the Alps?" I asked Issam. "Just outside Paris," he replied.
I almost peed in my pants, laughing!
Especally when we only got a dusting.

For four inches the French call in TANKS?

Please stop handing me straight lines about the French and their military... ;)

The over/under on whether it is even worth shoveling in Wisconsin is 3.5 inches.