C'Mon, Baby, Put the Rock in the House

One of the things about living in Wisconsin is that you learn what curling is. For those of you who live in warmer climes or who somehow missed the Norwegian men’s team in this year’s Winter Olympics (and really, with pants like the ones they were wearing, how on earth could you have possibly missed them? Entire fleets of spy satellites had to be shut down to avoid being overwhelmed by the glare from those pants), curling is a winter activity that resembles nothing so much as shuffleboard on ice.

Each team sits at one end of a stretch of ice that has a large bulls-eye painted at the other end. The goal is to slide large chunks of granite down the ice to rest on the bulls-eye. And it may have been in the Olympics, but it is most definitely not a sport. It can be performed perfectly well – even, perhaps, better – by people holding quart-sized beers in their hands, and thus qualifies as an activity, along with softball, NASCAR and darts.

Not that the girls had quart-sized beers. Just that they could have, in theory. When they get older.

This year we decided to enroll them in classes, in part because it sounded like fun – it certainly was fun the time I tried it – and in part because it’s something that will get them out of the house on a winter morning. Today was the second class, and the first one that I got to go see. 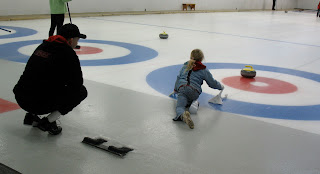 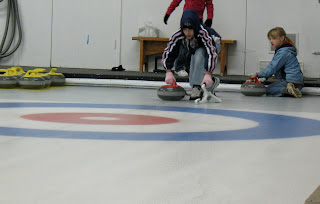 The rocks were flying, the crowd was into it, and the chatter looked positive.

Now all we need is to get them each a new pair of pants.
Posted by David at 8:39 PM