A Tree Died For You

How bad do things have to get when you spend an entire week trying to find a time to decorate a Christmas tree?

On Sunday we went out and, in the spirit of true Christian fellowship and love, killed a tree. We do this every other year around here, when we’re going to be spending Christmas in Wisconsin. It’s part of a much longer tradition in my family that stretches back to the 1950s.

Artificial trees are convenient and somewhat less of a fire hazard if you leave them alone for a few weeks in your living room, but they’re just not the same.

So we drove out to the local tree farm, where they grow these things on purpose, and set off to find the ideal tree. 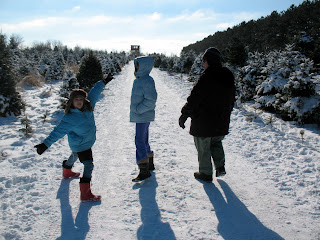 Now, this is where the generation gap comes into play. My own father conditioned me to expect this process to take anywhere up to an entire presidential term, as the perfect tree is a rather elusive prey. Not that it can run away or anything – just that its camouflage mechanisms are excellent. My daughters, however, were ready to take pretty much any vaguely conical evergreen that looked like it might fit onto the roof of the car.

So there was a certain amount of back and forth, shall we say.

Eventually we settled on one – a fir that, as we later discovered, smelled strongly of tangerines. But it had very soft needles in contrast with the last tree we got, a tree that was clearly made by Dwarves as a weapon. This one? Green-colored orange meringue pie. 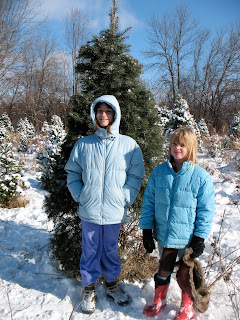 Naturally, it had to die. 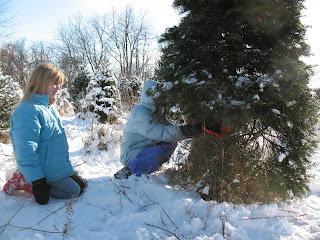 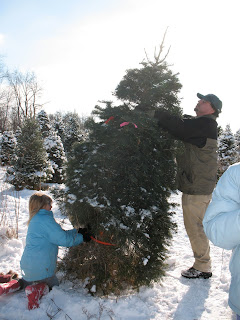 We got it home and put it in the garage for safe keeping. On Tuesday I hauled it into the house and set it up on the stand in the living room, and since then it has been something of a battle trying to find a time when all four of us are a) home, b) awake, c) motivated, and d) not consumed by other activities, such as homework, class prep, household chores, or Mythbusters.

You would be surprised at how few and far between those times are.

We did get some decorating done during Wednesday’s episode of Mythbusters, but since then we have come to something of a halt. 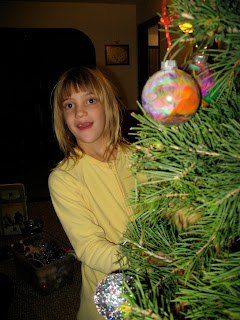 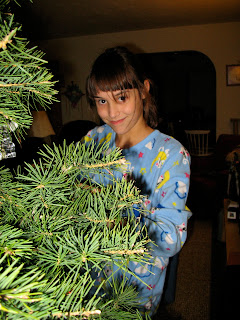 Well, we’ve got two more weeks to get things situated, and somewhere in that time there will be a moment or two to devote to this task.

In the meantime, there is eggnog.

Come, now. We were environmentally responsible here. The tree we chose was trimmed from its rootstock, leaving behind a healthy fir shrub from which another lovely fir tree will grow. Which is why these firs are freakin' expensive - you have to grow quadruple more tree stuff than what you see in the living room. And our tree had an identical twin sometime in years past as she's not the first to grow from this stock. Cool! (hilledul)