One More Set of Feet

Somehow we have managed to acquire a new rodent.

At least this one is only temporary.

A friend of ours is going out of town for a while over semester break, so we agreed that we would watch her guinea pig, a black and white thing named Barney. Lauren insists on calling it Mr. Barns. I have a tendency to call it Barnaby. I don’t know what Tabitha calls it, but I’m fairly sure the cats call it Dinner. Or at least they would like to.

We collected Barney last night and brought him home with us, secure in a cage roughly the size of Rhode Island. I’m not really sure what we’re going to do with this cage on Saturday, when there will be fifteen people here for Christmas, but “One Crisis At A Time,” that’s one of my many mottoes. We stuck it in front of the television for now.

The girls have been thoroughly excited about this whole thing despite the fact that Barnaby doesn’t seem to want to have anything to do with them or us or really anything other than his safe little enclosed area at one end of his cage. So far he’s taking it slow.

And I can understand that. If I were the equivalent of a mobile pot roast in a house full of cats, I’d take it slow too.

The cats have not made it easy for poor old Mr. Barns. They have, in fact, set up shop just outside of his cage. Watching, watching, always watching, waiting for that one mistake and then – WHAM! – they crash beak-first into the wire separating the inside of the cage from the outside, look at us pathetically and complain loudly about our interference with the laws of nature, as if these cats would know anything about the laws of nature. 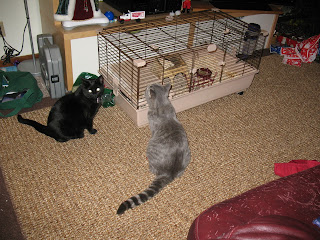 With any luck the blanket that we have been covering his cage with at night will help.  The last thing we need is to give the poor thing Post Traumatic Stress Disorder.  I don't know how that disease would present in a rodent, but my guess is that it would involve gnawing and I'd prefer to keep that to a minimum.

He goes back home sometime around the 30th, after which we anticipate a slow returning of feline and juvenile heartrates back down to something approaching normal.

The hamsters, it must be said, are jealous.
Posted by David at 9:50 PM

The poor things is losing its hair because it's STRESSED!
A little sadism, here?

A little stress is good for small creatures - otherwise they get lazy. It's the same principle I apply to my students.

The cats have decided that Barnaby is not going to end up in their gullets anytime soon, though, so they now ignore him and his stress levels are back down to whatever it is guinea pigs regard as normal.