She'll Be Coming Down the Mountain When She Comes

We went back to Mel Allen Hill yesterday.

For those of you new to this space, Mel Allen was the announcer for This Week In Baseball back in the 70s, and when running through all the highlights of players smashing into walls or “getting the wind knocked out of them” by short-hopping grounders he would always pause and then breathlessly say, “Oooh! That’s gotta hurt!”

You think about that line a lot as a parent.

One of the fun things about living in Wisconsin is that there is usually enough snow on the ground in winter that you can go sledding whenever you want to. This was not always the case when I was a kid in Philadelphia, though I note that winters there have gotten far snowier of late as well. But here in Baja Canada there is always snow and there are a few good hills around even in the flatlands and all you need is time and something upon which to slide down the hill.

This is more complex than it might seem, however.

One of our old inflatable sleds finally stopped staying inflated, so yesterday the girls and I went over to the local Mega-Store to pick up a couple of new ones. They inflated nicely, so the girls called some friends and told them to meet us at the hill – a towering feature of the landscape with a bowl at the top for you to rest in, a sheer icy drop to slide down, and a nice flat space at the bottom to coast to a stop before running into the road.

There are a few trees as well, so you have to aim for the middle. And if you take one of the side hills there is a small ravine at the bottom where a creek might run in warmer weather. But all in all a fine hill.

It was a fairly warm day, by winter standards – somewhere in the 20s – and the girls spent the better part of two hours sliding down the hill and climbing back up, a trickier process than might appear at first because of the ice. 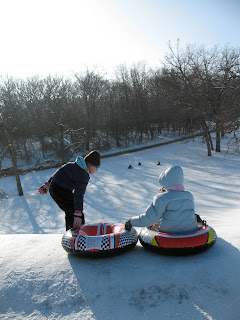 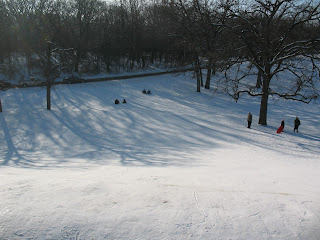 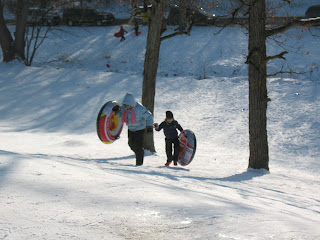 The new sleds did not survive the afternoon, losing air almost immediately. I will take that issue up with the Mega-Store tomorrow, I suppose. But as I am full of all sorts of hot air I kept the sleds going with periodic top-offs while we were there.

At one point Lauren went down one of the side hills, where some enterprising sledders had previously set up a ramp. She hit that ramp square on, flew through the air a good fifteen feet, landed flat on the sled and continued through to the little ravine, where she sailed across all four feet of it, hit the opposing shore, bounced straight up in the air, did a barrel roll and landed back on top of her sled.

But she was fine – invigorated, no less – and the girls spent another happy half hour exploring that side hill as well, fortunately with far less drama.

And then there was cocoa.