Christmas At Our House

It snowed on Christmas Eve here.

It should always do that, to remind us how beautiful the world could be if we would let it.

We spent the day finishing up all of the things that we probably should have finished weeks ago if we were the sort of people who planned ahead for that sort of thing, which clearly we are not. This is why, for example, I found myself at the post office at 11am mailing off our Christmas cards. Not that this is the latest we’ve ever done that, mind you – one year we sent them out for St. Patrick’s Day, for example. It’s just how we roll.

I also spent a fair amount of the day at the grocery store, picking up one last minute item after another. It was cheery, in an odd sort of way.

When I was younger Christmas Eve was always the big holiday – Christmas Day was sort of an afterthought, a big dinner with family and friends – and it had clear demarcations. At some point in the afternoon we’d pack everything up into the car and head over to my grandparents’ house, all of five miles away, and then the holiday was officially underway. But since we stay home for that these days, it sort of slides from prep to celebration unnoticed, which I find somewhat odd.

But we had a good time anyway.

Dinner was the traditional “odd number of kinds of fish” that one ought to have as an Italian-descended household. My grandmother always made seven kinds, which is a tradition that those of us in later generations have found somewhat excessive and have scaled back. “You know,” says my dad, “one is also an odd number.” But we have settled on three, since it provides some variety and seems festive in a way that one would not. We have linguini with clam sauce, popcorn shrimp and crabcakes, because they work for us and that’s what holidays are about.

We also drag out the wedding china, even just the four of us. We don’t get to use it much, really, and sometimes you just have to throw it on the table and make it work. It is a poverty to be fortunate enough have nice things and then never use them.

The same rationale applied to the Snoopy glasses that we used as well. Might as well make the whole table cheery. And yes, they go with the china just fine. 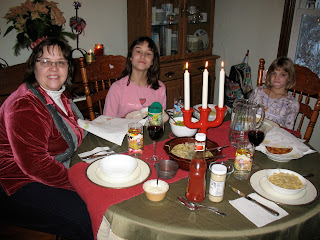 After dinner we raced over to the church for Christmas Eve service, which was a nice time. They’re always so surprised to see us there that it makes me feel special.

And then it was home for present opening by Skype with my side of the family in Philadelphia. Skype is just the most wonderful invention ever. We live in the future, yes we do. 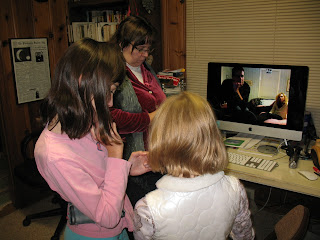 Santa arrived right on schedule the next morning. 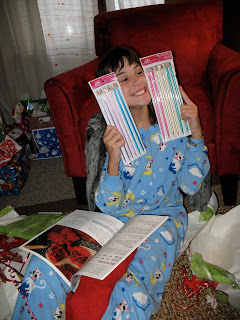 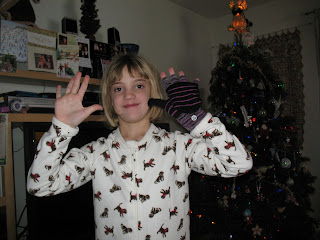 This was a Wisconsin year for the holidays, and for any number of complex reasons we ended up hosting Christmas Day at our house for the first time. Our guest list kept getting shorter by the hour until finally there were only nine of us around the table, but we had a grand time. 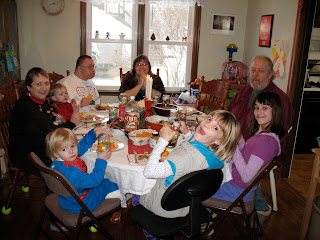 Holidays are for family and friends, and we are lucky that those groups overlap.

Kim’s parents came over, along with her brother Randall and our nephew Brody and niece Marin. The little ones motored around the way small kids do, while the adults talked the way they do and our girls alternated between them the way bigger kids do. It was that sort of day, and a wonderful sort of day it was. 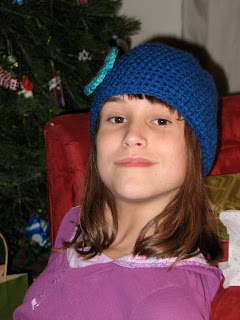 Oh, and we may never eat again. Just saying.
Posted by David at 9:15 PM