One of the benefits to living in Wisconsin is that we have real winters.

It snows here, for one thing. And we know how to deal with it. I saw on the news this week that Heathrow International Airport – Britain’s biggest and one of the busiest in all of Europe – was shut down for nearly a week because they got 14 centimeters of snow. It took me a little bit to work that out, but here in the colonies we call that “five inches,” more or less, and not even the Girl Scouts cancel their meetings for that.

It also gets cold. Really cold. Like wake up in the morning and the thermometer has no numbers, just pictures of sad brass monkeys cold. It was ten below zero (Fahrenheit, for those of you reading this in the waiting areas of Heathrow, not Celsius) one morning last week here in what was, technically, still autumn.

You people in Canada can stop composing your responses now – I fully understand that you consider that to be picnic weather and laugh at Wisconsin for being a land of tropical wimps. That is why you have not been invaded since the War of 1812 – nobody wants to get into a fight with people who think that way.

Either way, the great thing about cold is that there is ice. And where there is ice, there can be ice-skating.

Here in Our Little Town they actually have an outdoor skating rink down by the river – who knew?

And better? There is a little warming house there that not only has ice skates that you can use for free, but also will sell you hot cocoa for 50 cents a cup.

How did I not know this before?

So this afternoon, as the first day of Christmas vacation (I can call it that – I’m not on the school district’s payroll and thus cannot get sued) ground on interminably, I ended taking the girls and their friend Grace over for some outdoor skating while Kim continued the Christmas preparations. 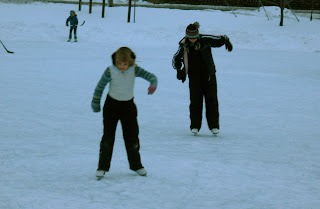 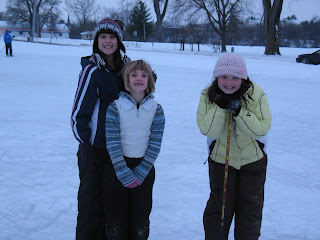 It was made of pure awesome, with little bits of crunchy awesome bits poured over the top.

And to you as well, Megan!

On December 8th Paris shut down under five inches of snow. I insisted on holding a Toastmasters' meeting. I was going to tell the people coming in from the 'burbs to stay home. Then, I realized that one was bringing lasagne. We had our lasagne.