Stories of the Theater

Tabitha got the part she auditioned for in the big Not Bad President Elementary School Play, to be performed in May. She will tread the boards as Red Riding Hood, and will, with any luck, remain uneaten by wolves or drama critics. 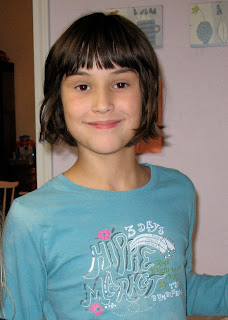 Theater runs deep in this family.

I spent the better part of my high school and college years backstage - building sets, hanging lights, and occasionally branching out into more arcane fields such as publicity. Once I ended up in the orchestra pit, turning pages for the pianist - which was a pretty neat trick considering the rudimentary nature of my score-reading skills at that point in my life. I continued doing this sort of thing (lighting and sets, not score-page turning) after I graduated from college, too - I spent a year doing it professionally, and then picked up little bits and pieces here and there right through to this past year. Have wrench, will travel.

The thing I always loved about the theater - aside from the people, who were generally a fun bunch - is that it is a natural laboratory for stories. For one thing, it is all about stories - the whole point is to tell a story, to hold an audience's attention for a few hours with sound and fury, whatever it may signify. And for another, well, the audience never does get the good stories. Those go on backstage. If you've ever wondered why the tech crew is laughing themselves silly during a dramatic scene, it's because they know what's SUPPOSED to be happening. You only get to see what actually is happening.

They're not always the same.

When we did Hair, back in my undergraduate days, the director decided that it would be really groovy (hey, it was a play about the 60s - they talked like that) if, at the end of the first act, all the actors would run around the theater, through the aisles, dancing and singing. This actually worked better than you'd think, except that on the opening night the lead actor decided to pay a visit to us folks running the lighting board in the back of the house. Weir was a great guy but as an actor he was not really attuned to the mysteries of "cables" or why they tend to run along the floor or why having them plug all the way into the lighting board was generally considered sound theatrical practice, so when he tripped over the cables and crashed into the board he didn't see it as all that much of a problem.

To be honest, neither did we, at least not until the beginning of the second act, when we noticed that the play seemed a bit darker than it had during rehearsals.

Fortunately this was during the acid-trip scene, when things were supposed to look messed up. Eventually we figured out what the problem was and put the main cable all the way back into the lighting board - Voila!  Lights! - and made a mental note to tell the actors not to come visit us until the show was over.

The audience never suspected a thing, and we spent the rest of the evening trying not to laugh too loudly, since we were only about three feet behind the last row of seats and we didn't want to distract the audience.  You've got to maintain the illusion that you meant it to work out that way, no matter how it works out.  It's good training for life that way.

Such is theater. Welcome aboard, Tabitha. Break a leg, or - as we used to say in lighting - blow a lamp.
Posted by David at 12:04 PM

Wasn't that the show that was performed in Houston Hall, a rather intimate setting, if I recall. You could almost reach out and pet an actor if you were so inclined. We had a blast. Shades of our (not so) flaming youth.

Yes it was - and we switched it around so that the "stage" was in the back of the house and the lighting board was where "upstage center" usually was. We lost a lot of seating capacity in order to have enough aisles to have those actors run around like that.