Our Trip to San Francisco - Day 4

San Francisco, like New Orleans, is a city where it is exceedingly difficult to find bad food.

You can do it, of course, if that is your goal. But there are so many wonderful little restaurants in San Francisco that there is no particular reason to have that goal. I've been in towns where your best option was fast food burgers - where the comfort of predictable mediocrity was all you could hope for from the dining experience. San Francisco is not one of those towns.

Although I will admit that we skipped the place with the sign that said in big red letters, "DONUTS," and then underneath that in smaller black letters, "Teriyaki & Hamburger," and which hung over the other sign reading "Chinese Food." There is no possible combination of those things that works, and there are simply too many other options in that city.

We spent most of our last day in San Francisco at the California Academy of Sciences, because we are nerds and it made us very happy indeed to do so.

If you've never been there, you should go. You walk in and the first thing that greets you is a Tyrannosaurus Rex. It stands jauntily in the entryway, welcoming you to the museum. Its tail points toward the gift shop. And if you know what is good for you you will stop there before you leave, or you just know it will come back to life, pick you up in its jaws, turn you upside down and shake you until your loose change pours directly into the till. You might as well get a tchotchke in return. 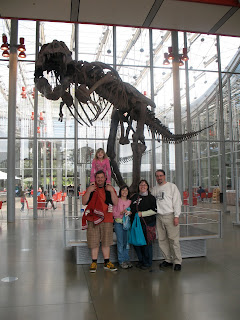 The first thing we did was hit the rain forest orb - a giant sphere, three stories tall and full of plants, butterflies, birds and humidity. You go up, you go down, and sometimes things land on you. They check you when you leave so you don't take the butterflies with you into the aquarium, which is what comes next. 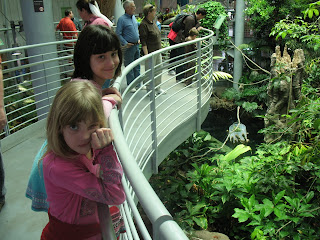 The aquarium is actually most of a floor, with tanks full of sea critters of all different sizes, shapes and luminescence. There's even one you can walk under, so you can look up at the fish. 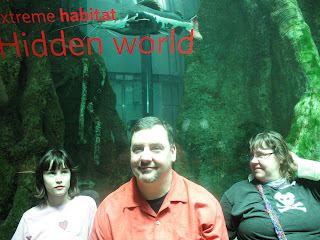 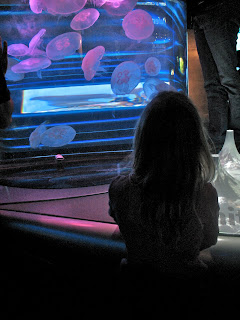 We had to cut that short in order to go to the planetarium, which is the other giant sphere at this place. It was quite a show - a tour of the universe from top to bottom - and after all that traveling we were hungry. So we went to the cafeteria.

I hesitate to use the word "cafeteria" to describe this place, though. There were about half a dozen stations serving better food than you could imagine, none of which was pizza, cheeseburgers or hot dogs. They had things on their menu that you've never even heard of, and they were all excellent. As well they should have been, considering that lunch for five people cost nearly as much as our airline tickets.

Our bellies full and our wallets light, we set off for the roof. It's covered in any number of carefully selected flora, and earnest guides are there to explain a) that this is not a "lawn," thank you very much, and b) how it all works, with various layers of plants, insulation, dirt, grubs, skylights, and recycled matter of varying kinds because nothing in San Francisco can be built with less than 60% post-consumer recycled matter as specified by municipal ordinance and enforced by threats of mobs with pitchforks (recycled pitchforks) and non-ozone-depleting torches. It was, admittedly, one of the more interesting roofs I have been on. 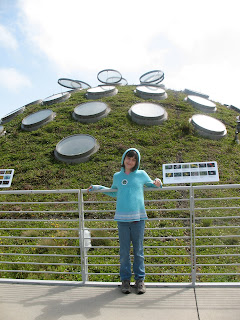 But not as interesting as the penguins.

What is it about penguins? They're birds. Ungainly birds at that. They smell like fish, they look like lounge singers, and they move like the third place finishers at a sack race. But they're just fascinating, and we spent a lot of time watching them. "Look! It moved!" we would say. And then one would swim up to us, and our day would be made. 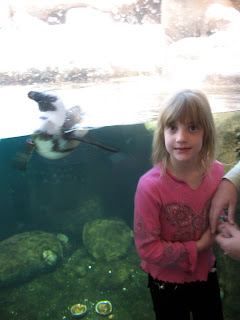 That night Dave took us all out to Treasure Island, in the bay, so we could see the city at night. It was lovely, as you would expect, but by then the weather had turned drizzly, windy and raw, so we didn't stay long.

Nor did we stay long in San Francisco after that. We packed up our stuff, and the next morning we were back on the plane and headed home. Other than the sheer incongruity of being able to wait in the airport rather than hurtling chairs in order to make onto the plane in time, it was a pretty uneventful trip.

We did stop off for burgers on the drive home from the airport, though. We're not in San Francisco anymore, after all.
Posted by David at 10:00 PM