I spent last night at Lauren’s Daisy troop meeting blowing up balloons. That is one of the benefits of being a historian – one always has a steady supply of hot air.

I go to a lot of these meetings. Lauren’s Daisy troop meets every other Tuesday at Greatest President Elementary, while Tabitha’s Junior troop meets on the off-cycle Mondays at Rigid Moralist President Elementary, a mile or two away. I am not sure why Our Little Town decided to name all of its elementary schools after presidents or why they chose these particular presidents, but it does make for some interesting history lessons and that’s all to the good.

Nobody ever names schools after Chester Alan Arthur, though. Or Franklin Pierce. Or Benjamin Harrison. We've had some pretty dismal presidents in our time, and I'm sure they'll all get their own schools eventually - somewhere deep in the heart of a county where ten gallon hats have never gone out of style and irony is thought to be a town in Mexico I am sure there are plans even now for grade-schoolers to attend an institution of edumacashun named after our most recent ex-president - but nobody thinks to name schools for the earnest non-entities like Arthur. I find this terribly sad, since in some sense he is a role model for us all. It's astonishing how high you can advance in society without any particular talent or agenda, and that's comforting, really.

But that isn't much to do with the Girl Scouts. 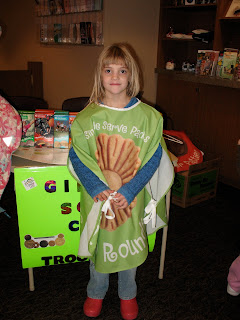 The thing about these meetings is that they are very much the preserve of women, even beyond the fact that they are Girl Scouts events. The leaders are women, the parents who hang around are almost all women – it makes me stand out a bit, it does. I get this when I volunteer at PTA events at Not Bad President Elementary, too, where I am often the only adult present with a Y chromosome.

They never know quite what to do with me there.

When Kim goes to these things she gets pulled in to the fray – asked to pitch in, detailed with part of the task load, and so on – whereas most of the time I am simply left alone. They don't even talk to me much. It’s like I’m not supposed to be there at all. I don’t get the feeling that I’m intruding, really, just that I’m rather like a polka-dot cat. Interesting, but what do you do with it?

I read Jasper Fforde's most recent book, Shades of Grey, recently, and there's a character in there who never gets a name but is referred to simply as "the naked man." Officially he does not exist, and therefore people simply refuse to see him. So he wanders in and out, taking food off people's plates, living in people's houses, and generally existing the hell out of his days despite the party line.

This is why I go to so many of these meetings, by the way. Not the naked thing, but the not-there thing. By the end of the day Kim is tired and being dragooned into serving as a junior troop leader is not what she bargained for, whereas I can just go and be not-there. The downside is that she’s much better at remembering the little details, such as when the next meeting will be held and what paperwork has to be filled out beforehand. It’s rather more exciting when I’m in charge, in a “we’ll figure out the next meeting when we get there” sort of way, but excitement is overrated when it comes to paperwork.

So I sit there and read, or grade papers, or prep for classes, or – once in a while – do something useful like blow up balloons, a stray man in a woman’s world. With clothes. I can't emphasize that enough. With clothes.
Posted by David at 7:19 PM

Au contraire: we DO have a local elementary school named after President Harrison. Yep. Check it out.

But *which* President Harrison? Aye, that's the rub.

Where are the COOKIES? How on earth can you go on and on about Girls Scouts without mentioning the cookies?
In France, there are Bible thumping French Girl Scouts, but there are also real American Girl Scouts in Paris. BUT, they CAN'T sell the cookies!! Damn customs.