Lauren and I played with the world tonight.

Lauren got a globe for Christmas - a very nice one that lights up from the inside when you push a button and reveals the constellations visible from wherever you happen to be. You have to turn out all the lights to see this, and eventually the constellations will shut themselves off so it makes a sub-optimal night light, but this feature never fails to make Lauren happy.

You also need batteries that aren't dead, but that is another issue for another time. 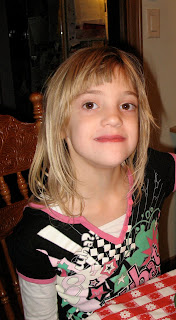 When I was a bit older than Lauren I had a globe of my own. It didn't light up, and the countries were a bit different then (does anybody remember West Germany? or British Honduras? most of my students down at Home Campus don't even remember the Soviet Union anymore, which I find both comforting and depressing in roughly equal amounts) but I was every bit as enamoured of that thing as Lauren is of hers.

When my dad's grandmother died in the early 1970s, my grandmother came to live with us. As I've noted before in this space, I don't know what the parenting manuals would have said about her but, for any number of reasons, she was a lot of fun for a young boy to have around. I still laugh whenever I am asked to find anything, in large part because of her.

One of the games we used to play was to take the globe and spin it, and then put our finger down somewhere and make it stop. And then we'd discuss the idea of traveling there. This could be tricky on a planet whose surface area was 70% water, 10% countries on the other side of the Cold War, and 1% Deep South, but we managed to have a good time anyway. It was as close as we got to traveling, and that was close enough for us.

Lauren likes to play "Find the Country." She'll pick one at random and tell you the color, and then you have to guess which one it was. It does solve the water and Deep South problems, and the Cold War is just another mental relic these days. We had a good time.

Although teaching her were Andorra was may have been counterproductive. It's hard to find a country that doesn't have room to run its own national marathon.
Posted by David at 12:53 AM

We got the kids a globe for Christmas in 2008 and it has proved to be, by far, the most useful gift ever. I think we use it at least twice a week to show them where something is. Nola is quite fond of pointing out where her friend Elliott was born (Kazakhstan) - "The pink one!"

I'm so glad Lauren is enjoying her globe. She's a really interesting little girl. And I didn't know about your globe games with Grandmom. What a nice memory!