Our Trip to San Francisco - Day 3

Nobody jaywalks in San Francisco.

Nobody is that stupid - not even Tea Party members, a conglomeration of people who voluntarily chose to be identified as "teabaggers" before angrily insisting we call them something else. "Whackaloons" doesn't seem to make them any happier. Nor do "paranoid obsessives," "treasonous windbags" or any of a whole raft of similarly descriptive labels. You can't really call them "The Tea Party" with a straight face either, since tea parties usually require the sort of civility, decorum and intelligent conversation notably absent at their functions. But even those folks would know better than to try to jaywalk in a city where cars outnumber parking spaces by up to 40%. Any space large enough to step off the curb from is a potential parking place in San Francisco, even those clearly labeled as crosswalks and bus stops, and contesting those spaces with San Francisco drivers is a no-win situation. You wait at the corner for the light to change, or you die. Simple as that.

San Francisco is an educational city that way.

It's also educational in a number of other ways, such as the plethora of fine museums housed within its borders. On Day 3 of our trip out there, we decided to take advantage of this - although we did stop ahead of time at a corner sandwich shop not too far from Geoff and Dave's apartment to stock up on lunch.

Yes, we parked in the crosswalk. But the pedestrians seemed to accept this as perfectly normal and did not yell at us, vandalize the car or call the police. It's an adventure, but a cooperative adventure.

We spent much of the day at the Exploratorium, which is a giant kids' museum not all that far from Crissy Field. We got there just as it opened, which meant we actually found a parking spot that could be defined as legal, and we made it through the doors about five minutes ahead of the school groups, so we had a moment or two to scope out the place before it was swallowed up in a mass of humanity.

And what a place!

Imagine a warehouse full of giant-sized toys, all of which are educational and yet surprisingly fun. You can play with them all you want. So we did. 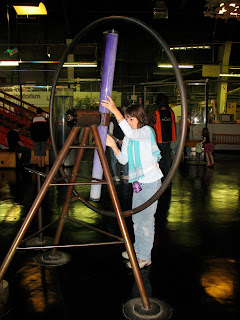 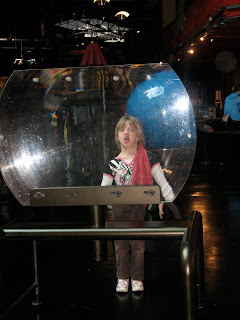 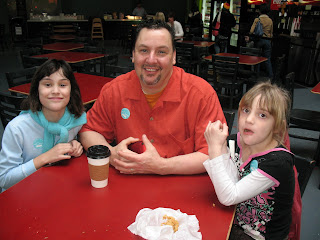 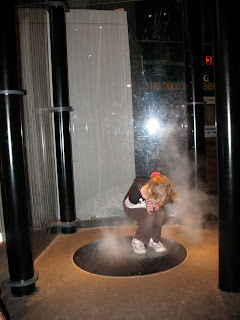 We took a break for lunch and went outside, where it was a beautiful spring day. We hiked down the path to the Palace of Fine Arts, which began life as an exhibit at a World Fair and was so popular they tore down the flimsy structures and built exact replicas out of actual construction materials. There's a pond - complete with all varieties of ducks, swans and sea birds looking for a handout - and even some climbing trees. 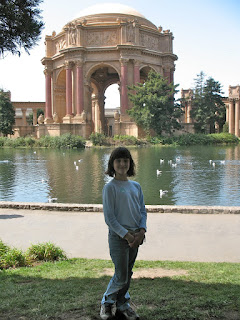 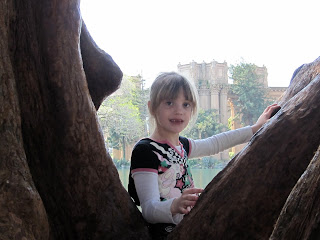 Lunch does not get better than that, even if it does involve yogurt, which Tabitha does not like.

As near as I could tell, the highlights of the museum for the girls were two. First, they had a science demonstration on the upper floor where you could watch a staffer dissect an actual cow's eye. Tabitha eventually wandered off, but Lauren was just mesmerized by the whole thing and stayed to watch every last detail. And second, they had a swinging board that they had rigged up with a marker contraption so you could make art out of it. The pictures were huge - and good luck taking them home on the airplane - but they turned out really well. 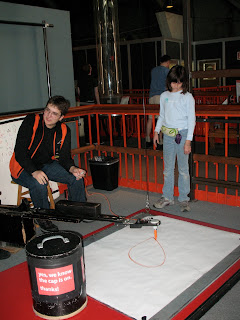 We got back to the apartment in the late afternoon, in time for some downtime. The thing about vacations is that you often spend so much of your day chasing experiences that you forget that a good part of why you are doing this is to relax a bit.

The highlight of this downtime was a short hike down the block to the Bombay Bazar (why do Indian stores always include that word and why do they always misspell it?) to browse around things that you simply cannot find in Our Little Town in Wisconsin. They had cool trinkets and exotic foods and it was just a pleasure to absorb it all. The girls even found some bangles they liked.

Geoff and the girls cooked dinner that night - spaghetti and meatballs, with a strawberry pie for dessert. It went surprisingly well. 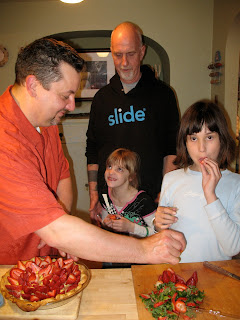 After dinner Dave took Kim and me to Yoshi's in Oakland, which is probably the world's only combination jazz club and sushi bar. Because they mix so well, you see. It was packed, which was surprising on a Tuesday evening, but the bass player in this group - a slip of a thing named Esperanza Spaulding - is apparently an up and comer in jazz circles and people wanted to check her out. And she was indeed a talented and entertaining musician, it must be said.

I actually enjoyed the supporting cast more than the headliner of the group, a sax player named Joe. Joe was really into "hot" jazz, a musical form built on minor seconds, fast runs, syncopations, and a general sense that you're watching a play entitled, "Five Characters in Search of the Melody." But the pianist was excellent, both (both!) of the drummers were clearly having a very good time, the bass was as noted superb, and even Joe demonstrated once in a while that he could slow things down and carry a tune. And Dave's friend Motty even spotted us drinks. So it was a fine evening.

Tabitha and Lauren stayed home with Geoff and Denise to dye Easter eggs. Judging from the seventy photos that they took of the process (really - seventy), they had a grand time. Geoff taught them how to use clear nail polish as a way to create designs in multiple colors on the eggs. Methinks this may come back to haunt us later this week, when we dye our own eggs, but so be it. Sometimes you just have to live dangerously. 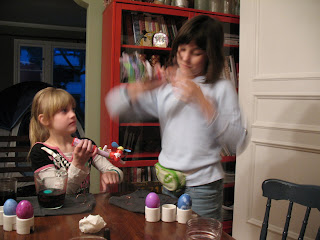 But not when crossing streets in San Francisco. There are limits.
Posted by David at 3:43 PM

LOVE the Exploratorium. Can't wait to take the kids there some day.