And again: if you want trivia, go to the source.

Last night the team from Home Campus swept the field in the local literacy council's trivia contest, for the second year running - our fourth trivia victory in a row over the last two years. This may be getting somewhat counterproductive, as neither Local Tech nor Nearby Private College bothered to field a team this time. I think we've intimidated them. And while this feels good from a competitive standpoint, it does lessen the effectiveness of these events as fundraisers. Perhaps we'll retire after this - go out on top, leaving only fond memories and the afterglow of our blaze of glory on the communal retina.

It's a small blaze, but it's ours.

They changed the format a bit this year. In addition to the two rounds of questions (over which we scored a cumulative 94% - don't mess with academics when it comes to trivia) there was a round of "Are You Smarter Than A Fifth-Grader?" which featured a team of people randomly chosen from the various teams (ours not among them) facing off against a team of actual fifth-graders from nearby Isolationist President Elementary. The grown-ups won by a point. Either we're not as bright as we like to think we are or the educational system in Our Little Town is doing a pretty good job with the fifth-graders.

At the end they had us face off against the second-place team - a team from the local hospital that at one time used to taunt us with claims of being the "real" doctors, as opposed to us mere PhDs, although they don't do that much anymore. Hey - I don't treat broken bones, you don't pretend to have stockpiles of useless information. We'll all be happier that way. But instead of being team-oriented, the final round was up on stage in front of everyone in a Family Feud sort of style, where you had to go up on your own and press the buzzer and answer the question. I got the history questions, naturally, and with the Dean in the audience there was no pressure at all. None. It's just my job on the line, really.

But we won, and I got two of my three questions correct (who was the last English king to die in battle, anyway?), and now the large and ungainly trophy below will safely reside at Home Campus for another year.

Maybe we should treat it like the Stanley Cup and everyone gets to take it home for a week. 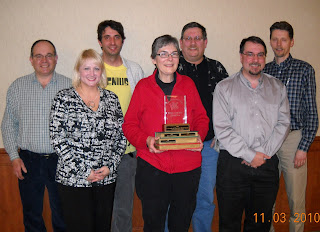 I am ramdomly certain that was a rhetorical question but I'll answer nonetheless. That would be Richard III in 1485. Last to die but not last to lead troops into battle. (That was George II if my aging memory serves me correctly).

Thanks, MikeB! I did actually want to know. Now I can go to my grave a marginally less puzzled person, and that counts for something. :)