The trick to walking through crowds is to lead with your shoulder.

This narrows your profile as you walk and allows you to fit through gaps that are rather smaller than the ones you usually need. It also presents an unyielding surface to any obstacle you should happen to run into, which encourages said obstacle to get out of your way. I learned these tricks as a teenager working my way through the crowded sidewalks of Center City Philadelphia, but they sure came in handy today.

Today was Wristband Day down at the County Fair!

Every year the local 4-H clubs gather up the herds of farm animals that they have been raising all year and bring them into town for a show. There are barns full of these things, all of them, in their way, mysterious to my city-bred mind. Naturally, the girls love them. And Kim, who spent large portions of her childhood on a dairy farm, sees nothing unusual at all about them. They simply are.

So every year we go to the fair and we meander our way through the barns, looking at the animals. There are barns full of cows – big ones and little ones, black ones and browns ones, dairy cows and “beefers,” all of them facing away from the walkway so they can poop at you with greater efficiency. There is another barn full of rabbits of every conceivable size and description, some of them capable of speaking with a Brooklyn accent. There are turkeys, ponies, sheep, and chickens. And there are goats, which are just the most ridiculous creatures ever to walk the face of the earth, and I say that as someone who spent years in theater.

You have to love the goats. They come right up to you looking for a handout, and even if you don’t give them one they’re perfectly happy just to stand there. Perhaps a handout will suddenly materialize if they do. Or not. They don’t seem to care, really. And you can milk them, as the girls enjoy doing at fair time. 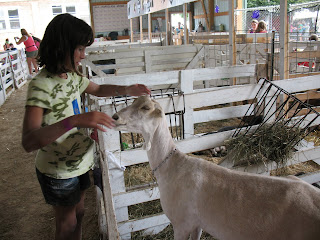 People come for the rides. And on Wristband Day, for a fee that could almost be taken as reasonable, you can ride as much as you want on whatever you want.

I took Tabitha, Lauren, and their friend Grace over around 1pm, after feeding them lunch ahead of time so as to avoid bankruptcy (Kim joined us after she got out of work) and they immediately began a whirlwind tour of all of the rides the midway offered. The Yo-Yo. The Tilt-A-Whirl. The Blizzard. Three different varieties of fun houses. The Giant Slide. Bumper cars. And on and on. 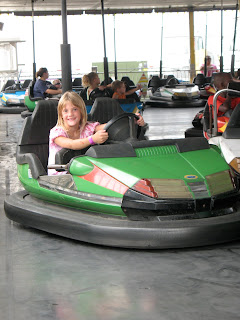 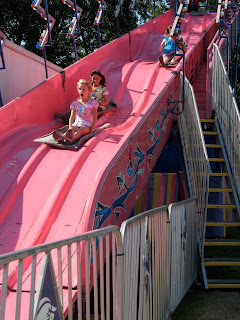 They paid off that wristband in about an hour, so hey – an investment.

People also come for the food, because there are very few places on earth where there are as many varieties of Fried Food On A Stick than there are at a county fair. We did manage to keep that to a minimum (corn dogs – who can resist corn dogs?), but we made up for this with a funnel cake, which is just Fried Food On A Plate. Someone, somewhere, is working on a way to serve it on a Stick, and that person will get rich.

People also come for the various booths that try to sell you things – goods and services, usually, but often politics, religion and healthcare as well.

I had a splendid little time telling the guy from the Constitution Party how utterly wrong-headed and preposterous his party’s position that the Constitution derives from the Bible is, for example. I did not convince him of the errors of his ways – confronted with evidence, such people almost always retreat back into unsupported faith in their own world, which is so much more convenient for them than the reality the rest of us live in – but it felt good anyway. Maybe someday he’ll remember this conversation, when he finally grows tired of bearing false witness.

We also spent some time at the tent set up by the local hospital, which always has the best swag, and I shook hands at some point with a man who claimed to be running for State Senate. He very well might be, now that I think of it. I can say that I knew him when, provided I can remember which one he was.

The girls also found a booth that gave them Dazzle Designs, which as near as we could figure out were simply glitter paint but were nonetheless officially “cool.” 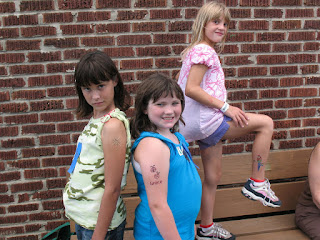 The one thing about the fair that we forget every year is just how loud it is. The noise levels in the midway are enough to sterilize frogs, which – though I am not a frog – nevertheless makes me glad that I have all the children I intend to have in this world. It also makes me wonder about the endless parade of teenagers who ply the midway, eyeing each other and spinning off into ever-changing assortments and groupings. Maybe they’re just immune at that age.

It was a long day when we finally gathered up the troops and went home, but a good one.

Greetings from the county fair. 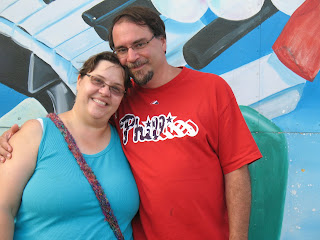 Wristband Day! I just loved that day when we were there last year! What a great time we had.