I dragged out my bongos last night. A friend had a “music, beverages and firepit” gathering, and while the firepit idea might not have been wise – it was still 85 degrees outside when I left at 10:40pm – it was nice to be musical for an evening.

When I was in college, I was in a band.

I think everyone should be in a band in college. It is an awful lot of fun and it requires no particular talent. Plus there is no more surefire way to get into a bar when one is not of legal age than to hold up an instrument and announce to the bartender, “I’m with the band.” It sort of made me wish I were more of a drinker at the time, really. It was a bit of a waste as it was.

There were three of us in the band most of the time – Jack, who played guitar, banjo and other random stringed instruments, Rob, who stuck with guitar, and myself, on keyboards, Jew’s harp, and, yes, bongos. The bongos came from a performance at a coffee house in the basement of one of the dorms where the acoustics were so bad that we literally couldn’t hear each other. It was decided that we needed a rhythm section at that point, to keep us in line in such venues, and when my parents asked me what I wanted for my birthday and/or Christmas that year I said, “Bongos.” To their eternal credit, they did not flinch at this.

We all sang. This was something of a problem, actually, since of the three of us only Jack and I could really hold a tune. Jack came out of a jazz background, where precise notes were essential, and I came from a choral background, where pitch was pretty much all that mattered. Rob was a folkie who thought emotion could make up for just about anything. It worked for Bob Dylan, he figured, and it would therefore work for him. Oddly enough, we usually had him sing lead. For one thing, he was also the songwriter and they were, after all, his songs, at least the ones we weren’t covering from other musicians. For another, Jack and I could usually bracket him with enough harmony that it came out sounding all right. Not always – Jack and I had the same vocal range and sometimes this led to attempts at harmony that were, shall we say, intriguing. But usually. 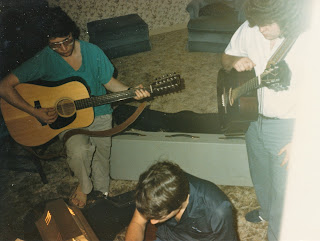 The only known picture of the band in operation,
rehearsing at my parents' house.
Sometimes the cliches are true.
That was the acoustic version of the band. There was also an electric version that included Neil on the bass and Jim, who we had playing drums but who could also play all of our instruments better than we could. He was the kind of guy who once picked up a stringed instrument he’d never played before (a mandolin, I think, or perhaps a banjo), plinked down the strings one by one and then said, “Oh! So this must be a chord, and this must be a chord, and this, and this.” And then he started playing it as if he’d been practicing since kindergarten. If he had ever gotten his act together he’d be a wealthy man by now, but getting his act together was not part of Jim’s considerable charm.

We mostly played the kind of folk/rock singer/songwriter music that was popular in the 1960s before it went underground – the 80s was not a particularly congenial decade for this music, but we liked it so that’s what we played. We could do all eighteen minutes of Alice’s Restaurant, for example, and Bad, Bad Leroy Brown, and one of our big crowd pleasers (to the extent we had big crowds) was Buskin & Batteau’s ESPN, which nobody had heard of back then either. Of course our biggest crowd pleaser was a medley of one of Rob’s songs – a bouncy little tune he called Love in the Summertime – and the jingle for Bumblebee tuna (“Yum yum Bumblebee, Bumblebee tuna! I love Bumblebee, Bumblebee tuna!”). The chords and rhythm were the same, and the drunks in the bar we used to play in just loved it when we did something they recognized. They’d sing along.

We also knew exactly half of Suite Judy Blue Eyes. Audiences never believe you when you say things like that, but it was true. That is how we ended up playing it one night, right up to the point where our knowledge failed us, and then stopping and waiting for the audience to stop clapping the beat so we could move on to a song we actually did know to the end. They didn’t question us after that.

We were called “Not The Catfish,” which was a story in itself.

We didn’t have a name for a long time. It seemed more formal than we were taking the whole thing, even if a friend of ours who ran one of the coffeehouses we’d sing at used to get annoyed because he never knew what to put on the ads when we’d appear. “Now appearing! Musicians!” But one cold February evening we were at his coffeehouse singing away and when the song was over Rob went up to the main microphone to speak to the audience.

Very little good ever came out of that scenario – Rob liked to think we were the Grateful Dead and could therefore just ad-lib entire shows – and nothing was different this time. “We’re going to do one of our big harmony numbers,” he announced. Jack and I just looked at each other, as we had already done all of our harmony numbers, big or otherwise. Rob came back to us and started playing. We eventually determined that he was playing Dream, by the Everly Brothers, a song that we had never practiced and indeed had not heard in months. Nevertheless we tried to join in, and the resulting cacophony is probably still floating around out there in space protecting us from stray meteors.

We never did come up with a better name.

It’s been a long time since that night and the world has regrettably become full of catfish in the interval.
Posted by David at 2:31 PM

I had completely forgotten the band. What a crazy group that was. Good fun!

Citing artistic differences
The band broke up in May--
And in June reformed without me
And they'd got a different name....

Combined with my tendency towards stage fright in any public performance and limited skills to start with, I never played out, though there are various cassette tape demos still lurking in the bottoms of boxes, etc. Some of my recordings were done essentially old-school reel-to-reel, bouncing tracks between two different cassette decks, then I eventually got one of those awesome tiny Tascam four-tracks. ("Tiny" being relative--the Tascam was about a foot wide and probably 6' thick; these days you can get a pro-quality portable digital recorder with basically unlimited tracks that's the size of a calculator.)

I was serious and passionate in the day, and still recording up through, oh, the late '90s or early oughts; eventually the Tascam was replaced by a big digital deck that is sadly unused now despite intentions I once had to set up something in the condo. I hardly play anymore--too many demands on time, too little patience, though I sometimes (rarely) pick up a guitar when I'm watching a dull movie or something and noodle or strum a bit.

But, back to the point: yes, everyone should be in a college band, at least for a little while.