The End of the Beginning of Summer

The first part of summer seems to have come to a satisfactory conclusion today with the Girl Scouts softball tournament. Lauren’s team didn’t play, as the A-League just gets an exhibition game (one of the consequences of not keeping score, I suppose). But Tabitha’s C-League team was in the playoffs all week, and today was the final day.

For those of you who may find yourself in this situation someday, here is a word of advice – when someone asks you if you want to be one of the umpires in a softball tournament, the answer is no. Remember that, and you’ll thank me someday.

Nobody gave me this advice.

So there I was, in my official “Coach Dave” GS softball shirt, which was for Lauren’s team (as that was the one I helped coach) but which was the exact same hot pink color as Tabitha’s team this year. That looked sort of odd to the other team, no doubt. GS softball is also not firehouse league softball, so the rules were somewhat different than I was used to. And not just the “no drinking while fielding” rule that the Girl Scouts impose, either. There is no tagging, for example, and runners can be called out for leaving the base if the batter swings and does not actually hit the ball. There is also a line about halfway between each pair of bases, and bad things happen if you cross that line when you’re not supposed to.

Fortunately I was only asked to judge fair/foul balls down the first base line and call out or safe at the first two bases. Those rules didn’t change much. And there were only two close calls (both fair/foul calls), and I ended up giving one to each team.

It was a good game – Tabby’s hot pink team dominated the white team 27-13 in seven long, hot innings, and my umpiring career was thankfully over. Only one person told me I stunk, and – this being the midwest - he was polite about it.

The hot pink team then got to cram down lunch and immediately play the green team, and it was a tired group of hot pink girls facing the team that had beaten them soundly the night before. Not surprisingly, the green team – a talented squad with very nice girls and coaches – repeated that performance and took home the championship. Tabitha’s team took second place and got very nice trophies that spin, which made them happy. 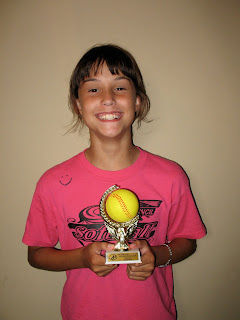 And then there was ice cream afterward, to celebrate the end of another stellar season, which made them even happier.

But this wasn’t the only milestone achieved this week. The girls have been in various forms of summer school all summer, which has not been the sentence of doom that it would have been back when I was a kid. Back in the Pleistocene the only reason you went to summer school was the rather optimistic notion that the cure for not liking or understanding a subject was more of that subject. But now in our future full of Teh Shiny, they have cool classes.

The public school district kept both girls occupied for about three weeks with great stuff. Lauren has an interest in languages, so she took both Spanish and French. This initially worried me – I took Spanish in high school and Italian in college and discovered that Romance languages in general are close enough to get you confused but not close enough to get you credit. Fortunately Lauren is not as easily confused as I am, and French class had the added benefit of introducing her to Nutella, which we do not have in our house. Mmmmm, Nutella. She also took an Arts and Crafts class that produced all kinds of wonderful things.

For her part, Tabitha took an Arts and Crafts class as well, one that somehow managed to spend the first half of its existence on origami and the second half on what we used to refer to as “gimp” back in the 70s – that plastic cord that you would weave into lanyards when your camp counselor was looking and nooses when she was not. Tabitha also took a class called Amazing Authors, wherein she wrote two books (one about cats – shocking, I know - and the other about dragons), and a class on pottery.

For her masterpiece, she produced a Hodag. 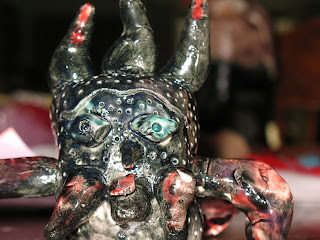 For those of you not from northern Wisconsin, a Hodag is the upper-midwest version of Bigfoot – a tall, hairy, and presumably well-mannered evolutionary throwback that haunts the woods around Highway 8, where Kim grew up. When I was a kid back east we had a similar creature called the Jersey Devil, which has now morphed into a hockey team. When you look at it that way, the Hodag is clearly the one you want to create in a pottery class.

When those classes ended the girls went directly into a week of College For Kids down at Home Campus.

Lauren took two shorter classes and got out around lunch time. The main point of her first class was to create a board game, and – as you would expect in this house – hers was about cats. 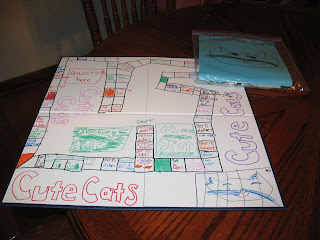 She also took a class called Dino Diggers and produced her own fossil. 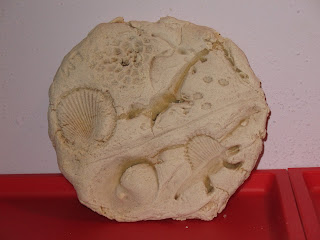 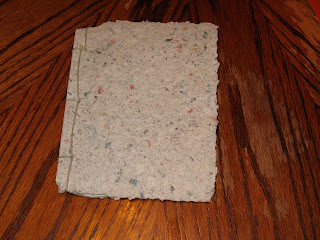 Apparently it has ground cicada shells in it. One assumes they are acid-free.

So now we stand at the beginning of the end – the part of the summer where we don’t really have to get up early anymore. There will be ice cream, no doubt.
Posted by David at 9:11 PM