Yesterday was the big Parents vs. Girls scrimmage that Tabitha’s softball team decided to stage. You should have been there.

The game was more of a mob scene than these games usually run, which is saying something, but we had a good time. There were anywhere from nine to twenty girls batting, as people came and went and siblings got added in and taken out. Lauren, for example, got to play the entire game. There were even a few boys playing.

As for the parents, well, the immortal words of the Wizard of Oz certainly came to mind out there. Remember the scene where he berates the Tin Man for having the temerity to ask for a heart? “You dare to come to me for a heart, do you?” the Wizard thunders. “You clinking, clanking, clattering collection of kaligenous junk!”

Let’s just say it’s been a while since most of us had taken the field for anything more strenuous than a flea market. I’m not even sure what “kaligenous” means, but it was probably appropriate.

But we had a good time anyway, clinking and clattering away. 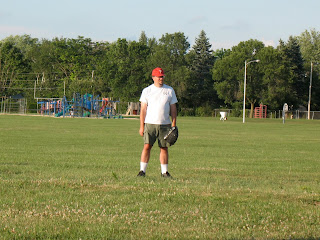 I am out standing in my field. 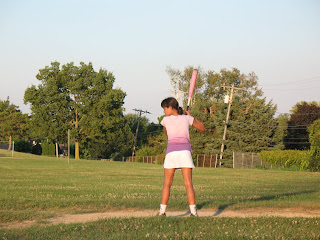 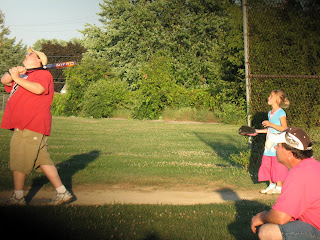 Lauren looks for the pop-up.
The parents had to bat opposite-handed for the first few innings. This was meant to try to even things out, but since we weren’t keeping score or monitoring outs too closely the main effects of this were to increase the chances of injury to everyone involved. For us parents, it meant using muscles in even MORE unfamiliar and unpracticed ways than would otherwise have been possible, something my back really does not appreciate much these days. And for the kids, it meant that the parents did not have as much control over their swings. Tabitha ended up getting nicked by a line drive at one point, though she survived without even a bruise. So we batted normally after that, and the number of line drives plummeted.

Lauren’s team has finished its season and has only the exhibition game at Saturday’s tournament to look forward to. If you’ve never been to one of those, imagine two teams of five and six year old girls, each with about 24 players, all of whom want to take the field, all of whom need to bat every inning, and none of whom really worries too much about fielding. It’s a long game.

Tabitha’s team spends this week in the playoffs. She starts tomorrow. Go team!
Posted by David at 4:29 PM