No we were not on the lam, desperate to escape from the forces of evil, or even the forces of mild irritation, lukewarm drinks and those tiny little bugs that you can't see but somehow always fly right into your eyes anyway. Although there were no bugs there, so we would have succeeded if that had been our goal.

Just before the school year ended Tabitha's class went on a field trip to the Cave of the Mounds, with Kim along as a chaperon. If you're wondering how a hole in the ground can be the same as a large pile of ground, well, you're not alone. The best I can figure it is just one of those things that happen from time to time and it is best not to think about it too hard.

But while it may be puzzling to you and me, it was sheer magic to Tabitha. She just loved this place, and she was determined to share it with me and Lauren before the summer was out. And Friday was it.

We drove on up, paid for our tickets, and ... waited. They only bring you into the place every so often, and we had just missed one tour. Fortunately they had ample gift shop opportunities, and we browsed like there was no tomorrow. We can browse with the best of them, yes indeed we can. They even had one of those machines that let you squash a penny into one of several "Cave of the Mounds" designs, which is the mark of class for any tourist destination.

Eventually they called us in from our penny squashing, and we watched a short movie about the cave before being let in.

It's quite a cave.

It takes about an hour to go through it all, and at some points you're as much as seventy feet below ground. It's full of stalactites, stalagmites, "flowstone," and several areas with the comforting name of "collapse areas." There are vaults soaring overhead, pools here and there, and from time to time it even rains.  When you get hit by a drop they call it a "cave kiss." 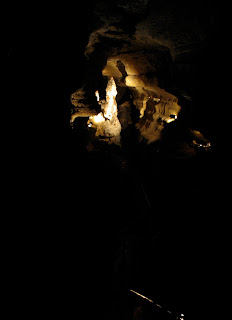 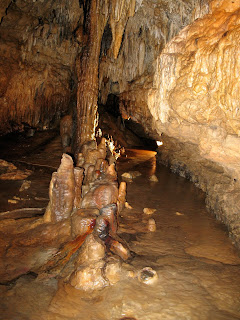 At one point the guide even turns out all of the lights so you can see what pitch blackness looks like. You know what? It's dark. They even sell postcards of it.

It is in fact a marvelous place, and if you find yourself in the Madison area you should definitely think about going. 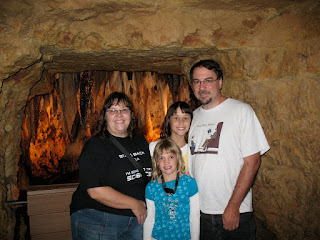 Don't forget the yummy cave bacon and drapery stalctites! Tabitha impressed us all with her grasp and memory of cave vocabulary.

Tabitha taught us that stalactites are "tight to the ceiling" while stalagmites "might just reach that high someday."