I am surrounded by Wii-tards.

I finally lost the battle over the Wii, not that it was a battle at all really. I knew from the moment that Kim and the girls fell in love with it over Christmas that we were going to get one, and that resistance on my part was futile. I’m not really opposed to it, I guess. Just not all that interested.

My video-game gene is malformed. When I was a kid in the 1970s, my dad went out and got us Pong, which allowed us to play paddleball on our old black and white television. Keith and I thought this was just the coolest thing in the world, and we played it so much that the TV ended up with a permanent ghost image of the Pong court. Eventually I graduated to other games: Seawolf, a WWII submarine game that as far as I know existed only in one arcade in Sea Isle City, NJ; Galaga, where the universe was threatened by attacking aliens and it was my job to die first so I wouldn’t be bothered by the screams of those I was supposed to defend; and – my favorite – Asteroids, where I was given inadequate resources and told not to get crushed by forces beyond my control for as long as I could, which turned out to be good training for life in general. The fact that eventually those forces would crush you no matter what you did was also good training, it turned out.

The ice rink where the girls have their lessons has a Galaga, oddly enough, and Tabitha and I play sometimes. She shoots, I maneuver. Eventually we die. All the fun in the world for a quarter – such a bargain!

But that’s where my video game life ended. I’ve never managed to figure out what to do with Grand Theft Auto or any of the games of the 90s or the current decade. I even missed out on PacMan. I’m not sure if this qualifies as a heroic last stand against encroaching cultural barbarism or the pathetic inability to grasp new technology and have some fun with it, or even whether that’s a distinction worth making at all. But there it is.

Does Myst count as a video game?

When her fitness club lost its lease, Kim ended up with some refund money to spend on something that would, in theory, make her move around enough to replace the fitness club. So, naturally, her thoughts turned to Wii.

UPS tried to deliver it on Friday, we think. At least they called to tell us they would deliver it. I was home all day, beating my head against the requirements of On-Line U and leaving splotchy marks in the shape of grades all over my students’ essays, but no Wii arrived. So we called them, and they called us, and after several rounds of this it was determined that I could go down to the UPS warehouse and pick it up on Saturday.

Kim spent most of Saturday setting it up, and then the girls took over. 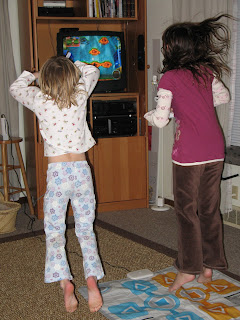 They spent the rest of the day doing Wii things. Bowling. Climbing waterfalls. Jumping rope. Creating an army of virtual Wii people whose precise function is yet unknown, though I am staying away from any pod doors for the near future. It was quite a thing.

Eventually I suppose I will end up playing on the Wii. Certainly the girls have asked me to.

I wonder if there are aliens.
Posted by David at 3:39 PM