The Case of the Missing Hat

Tabitha has her hat back.

A while ago she came into the possession of a knitted set of hat and mittens, and she has loved them ever since. She especially loves the hat, since it has pompoms top and bottom that she can pull on to get the hat off, put it on, and generally just pull on for the sake of pulling on. These pompoms are so special that the cat hasn't eaten them yet. Yeah, they're that cool. It's a dream hat, all the way around. 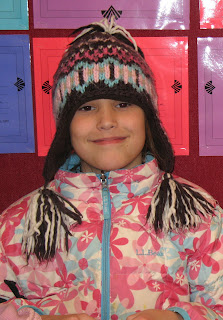 This hat and mitten set is her default cold weather gear, and when they get wet and have to sit in front of the heater vent all day because she forgot to take them out of her backpack when she got home from school so she can't wear them to school the next day, well, in that situation the world just has bones. Big bones, right in the air, that get caught in her throat and make everything just sad and grey and lifeless.

Don't you hate when that happens?

So you can imagine the consternation here at the family mansion when it was discovered that sometime Friday, the hat went AWOL. She had it at school for the Third Grade Musical. She had it at the McDonalds for our celebration. She did not have it at home.

We searched the car. We searched her backpack. We searched all of the usual places that lost winter gear slinks off to, but no luck. I even called the McDonalds, and was told by some junior manager that nobody had turned anything in - why, he was staring at the lost and found box even as he spoke, and it was empty.

As was Tabitha's world.

Lesson: do not trust the word of junior managers, for they are lazy and deceitful even in cases involving children, for which they should be covered in molasses and locked in a tanning booth with nothing to do but develop a thin, flaky crust and think about how much they itch.

Not that I have strong opinions about this sort of thing.

I stopped by the McDonalds on Monday on the off chance that Mr. Junior Manager was lying, and I spoke with the cashier - you know, someone who does actual work - and he instantly retrieved the hat from where it had been since Friday.

So Tabitha is now happy, and the world no longer has bones. We like those days.
Posted by David at 12:34 AM