About four years ago, we decided that what the girls needed was ice skating lessons. Well, Kim decided that. I don't really have all that many memories of ice skating from my childhood, so it wasn't high up on my list of things my kids should do. On the other hand, the memories I did have were pleasant so I had no particular objection to it. This is how a lot of things get decided in our household, actually.

At any rate, Tabitha and Lauren seemed excited by the prospect no matter how it came about, so off they went.

It turned out well, at least for Tabitha who fell in love with the process. She whirled, she twirled, she just ate it up. Lauren was not so amused, at least not initially. As with our abortive efforts to get her into soccer and gymnastics, she enjoyed the activity itself greatly but was not all that interested in being coached. What can I say? She's my kid. So when the first cycle of lessons came to an end, she opted out - but Tabitha was hooked, and has been enrolled pretty much ever since. 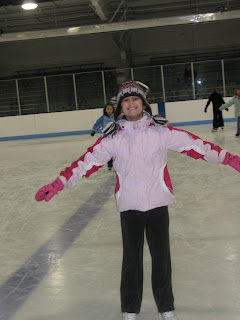 Lauren comes and goes. She's been in an "on" phase for a while, though, so she's gradually catching up to her sister. She's gone through the Snowplow Sam levels, and is into Basic 2 now. Tabitha is up to Basic 4, which involves a lot more free-flowing skating up at the other end of the rink, where the big kids are. 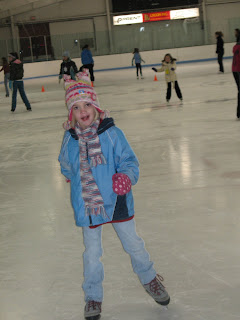 Most Saturday mornings during the school year we schlep our way over to the ice rink, fight through the wave of midget hockey players as they leave from their practice, and get suited up. There is a short interlude while we watch the Zamboni do its thing - honestly, who doesn't enjoy watching the Zamboni? It's like watching a harbor seal do ballet - and then off they go onto the ice. I retreat to the stands with a book of some kind - with footnotes if I happen to be teaching that semester, without if not - and I watch them skate around.

They do okay with the lessons - even Lauren is okay with them now - but the real treat is the "free skate" afterwards. Officially, they are there to practice what they have just learned. Unofficially, it's Cannonballs On Ice, with small bodies zipping by at high speeds in a generally counterclockwise motion. Mostly. There's always someone who bucks that system, and then the laws of physics come into play. Everyone seems to have the most fun at those moments, oddly enough.

I've got to get these kids to a hockey game.
Posted by David at 4:02 PM