Another Opening, Another Show

The big third grade musical was held today, down at Not Bad President Elementary, and it was a hit.

These things are always crowded, which is a good sign since it means that the families think it's worthwhile to spend their time watching their kids perform. You have to worry about a school where these shows get no audience. But the gym at NBPE is always stuffed to the gills with eager family members, most of them seated on the folding chairs in the middle of the room, but more than a few of them standing in Photographer's Row in the back. If I could have gotten the video camera to work, I'd have been there myself. It's nice to have this kind of audience show up, even if it does mean having to hire a Sherpa and a dogsled to get from where you parked to the school. Sherpas have to eat too, I guess.

Not that I couldn't also use the exercise.

Kim and I arrived separately, me having spent the day pounding my head against the requirements of On-Line U and Kim spending her day at Home Campus here in town. I got there first, staked out some seats, and went to collect Lauren from kindergarten - because you know that if Tabitha is performing, Lauren wants to see.

And Tabitha was indeed performing. She was one of the many narrators, and had been practicing her lines for months. All of the third graders had been doing that - the exuberant singing that filled our basement during Tabitha's birthday party last month was most of the score of today's performance, although this time we got to see the gestures that went along with it.

The kids filed in, the principal said a few inaudible words of welcome, and the show started! There was dancing, there was singing, and there was - of course - narration. Narration of the highest order.

Between Tabitha and Lauren, we pretty much have the market cornered on Narration.

She did a very good job up there, despite later protestations of fear and dislike - she marched up, said her lines clearly (and only her lines - earlier there was some concern that since she had memorized the lines of the other narrator in her pair she would say them too, but this Did Not Occur) and got back into place without knocking anyone down - a trick when the risers are that closely packed. 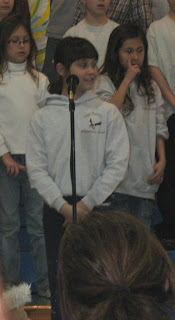 We all went out to McDonald's for pie afterward. There is no celebration like pie, even if it isn't much like pie at all.