We have a new computer in our house.

Kim's computer was slowing down to the point where she could not get any work done on it. Given that she does a lot of work at home, this was not an optimal situation.

Part of this situation was because we got her old computer six years ago, and the average lifespan of a computer is about half that, at least according to the IRS. And when it comes to valuing life, there is no better judge than the tax man. You know where you stand with the IRS - down the last mil - and if they tell you that your computer has passed from the "zowie wow!" stage through the "useful helpmeet" stage and into the "boat anchor" stage, well, there you go. Never argue with the IRS - remember, it wasn't Elliot Ness that got Al Capone.

Also, the old computer was full.

Really. Full. As in stuffed to the gunnels with programs, files, information and defunct children's games. As in "you have 6kb of hard drive space left." As in "I'll just go do a load of laundry while this program boots up." Full.

So we bit the bullet, adjusted our budget, and sprang for a new iMac. It arrived yesterday.

It's huge. It's fast. It has memory with a capital "f." It is made of teh shiny, with a coating of pure awesome. I may not see Kim again until summertime. 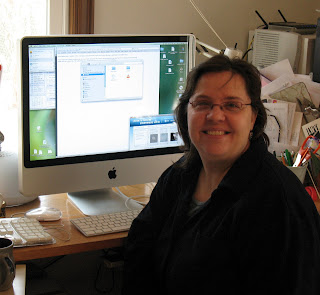 And don't even get started on the girls. Tabitha and Lauren really haven't had time to try it out yet, though Kim did let Lauren look at How the Grinch Stole Christmas on it last night. I get the feeling I may have my computer all to myself soon. Of course, the plan is to strip off all of Kim's files from her old one and let the girls have it, but we will see about that. It's not as if teh shiny doesn't appeal to kids, too.

The odd thing about this computer, though, is that it - like every other computer I've ever owned - cost roughly $1500. Every one. From my original Mac Plus I got in 1989 to the laptop I got in 1995 to the iMac I got in 2002 - all roughly $1500. All of Kim's computers were about that much too - the Mac Classic, the IIe, the old Bondi-blue original iMac, the spaceship iMac just now retiring. We have a fairly comprehensive history of the Apple product line in our house, and they all cost the same.

And yet, every time we upgrade, we get:

More RAM than the previous computer had hard drive space. My Mac Plus had 1 meg of RAM and an external 20 meg hard drive. The laptop had 32 megs of ram and 500 megs of hard drive. My current computer has more, but even if you added it all together you wouldn't get the RAM of the new one.

A larger screen than the one before. Often by whole number multiples.

And on and on.

Oh, someday this new computer will be full and old, and a large black-cloaked figure carrying a scythe and wearing wing-tip loafers will declare it "fully amortized." But until then we are going to revel in the pure awesomeness of its awesome awesomosity, with a side of awesome to go. Because we're just like that.
Posted by David at 1:34 PM