C is for Cookie, That's Good Enough For Me

Our house is full of Girl Scout cookies. But not for long.

All of the cookies that we so diligently tried to sell came flooding in a while ago, and we have spent a fair amount of time trying to get them to their intended audiences, with general though mixed success. We'd better complete this soon, though, since the Scouts want their money and if I've learned anything in the past year it's that you do not cross the Girl Scouts when it comes to their cookie sales unless you want to find out what a range of some of the more obscure badges - beginning with "Courtroom Drama" (a vulture with the scales of justice, cookies dexter, cash sinister) and culminating with "Cross-Cultural Collections" (two large guys named Vinnie, one holding a small box with air holes and the other a hammer) - really mean. You have to look at those badges carefully. There's more to them than you'd think.

We also bought a raft of cookies for ourselves, because Girl Scout cookies are some of the most addictive treats on the planet and we've been feeling a need for such things lately. We ordered some from Tabitha and some from Lauren, and when that wasn't enough we got more from Lauren when she was down at the local supermarket selling them face to face. 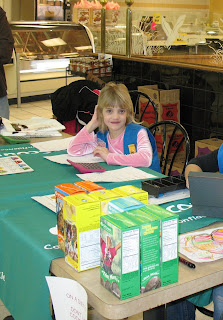 There must be a self-help program for this, truly there must.

My personal favorites are the Caramel Delites, which used to be called Samoas before, well, I don't know what happened really. Perhaps the Samoan community fired up his laptop and complained, though I can't imagine why he would. If they were called "Daves" I'd have been feeling pretty good, myself. Caramel, coconut, chocolate, shortbread - what's not to like?

The Peanut Butter Patties - which we can have at home now! - are just like Tastykakes, only crunchy.

And don't get me started on the Thin Mints. It's not pretty.

The functional unit for measuring Thin Mints is the sleeve. Nobody - not even diet mavens and supermodels - eats less than a full sleeve of them in a sitting. The others you can eat just one at a time and then go away, though why you would want to be so restrained is an open question. Not these puppies.

And then you sit there in a chocolate-peppermint haze, staring idly down at the spot on your stomach beneath which you are sure your feet are hiding and trying to remember any of the previous ten minutes. There was a sleeve of cookies in front of you then. Now there is not. And the thing is: it feels good anyway.

I wonder what the badge for THAT looks like
Posted by David at 12:27 AM