1. The Tooth Fairy arrived, right on schedule. It's good that she doesn't let all that fame and fortune go to her head and start blowing off the little people who made her what she is today. Although you do have to wonder about someone who spends their time breaking into people's houses to steal their teeth. What does she do with them? There are only so many maracas one needs in life. Do they make good building materials? Well, whatever her personal quirks, she is a fairy of her word, and Lauren was very happy about it.


2. We also bought some Oreos for the railroad tracks thing. They're hard to see in this photo, since a) Lauren only lost one tooth, so it's kind of a monorail thing, and b) they're Double-Stuff Oreos, so the imprint tends to get lost in all that partially hydrogenated sugar. But it's there, yes it is. 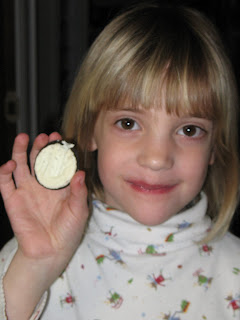 3. There is no force on earth quite so strong as a conga line at an elementary school dance. We went to Not Bad President Elementary on Friday for the big dance, and a good time was had by all. They ran through all the classics - YMCA, the legally mandated Chicken Dance (see below), and most if not all of the High School Musical oeuvre - and when we got home we threw the girls directly into the bathtub. Can't ask for more than that. 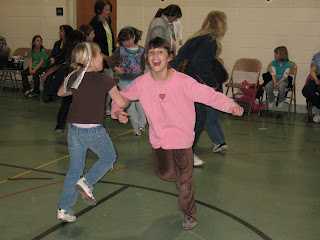 4. It snowed last night. Yes, snowed. It should not snow after the first barbecue of the season, which was held the previous week here at Chez Us. And yet, there it was. Our poor barbecue grill, sitting forlornly in the driving sleet-like snow, grimly waiting for the world to catch up to where it clearly ought to be. I sympathize with that.

5. Kim and I went out to play cards last night. We've been part of a "500" group for a couple of years now, mostly because they're fun people to talk to as we find new ways to lose. It's an odd game - not the 500 Rummy that occupied much of my youth, but a bidding, trump sort of game with a number of rules that I suspect are unique to this particular group - but an enjoyable one. We spent an hour playing cards in the dark as our contribution to solving the world's energy shortages, and I expect to see a report on that shortly. Also, we won. For the first time. Ever. I suppose it is time to go buy a lottery ticket.
Posted by David at 6:12 PM