I’m between semesters now, which means I don’t have the pell-mell rush on Thursdays that I had all last year.  And that means that, should I choose to do so, I could post a Throwback Thursday picture.  Since today is my last Thursday before everything starts up again, I decided I’d throw one up on my Facebook page and then, as is my habit, write a post about it here that delved into some of the backstory.  The whole point of photographs is to preserve stories, after all.  If you don’t tell the stories attached to the photos, the photos become meaningless.  I had to catalogue too many of those when I ran the historical society a few years ago.  Stories are important.  They need to be told.

So I found this picture buried in the family archives.  I’d scanned it a couple of summers ago as part of that earlier project, and it seemed like a good one to share. 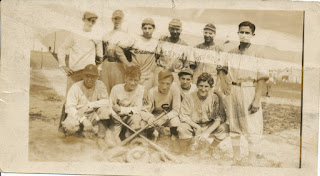 The short version is that this is the Cresmour A. C. base ball nine, a neighborhood sandlot team that played in South Philadelphia in the late 1920s or early 1930s, when "baseball" was still often written as two distinct words.  I’m pretty sure my grandfather is the guy standing at the far right.  That’s about all the information I thought I had on it.

Except that my grandfather also kept a small scrapbook where he pasted newspaper clippings from his baseball days, one that I could mine for cross-references.  It turns out that he played on a bunch of these neighborhood teams – Penrose, Mayo, Passyunk Square, Kimball, and so on – mostly as a shortstop, but occasionally as a pitcher and once in a while as a second-baseman.  Most of the guys on those teams played more than one position, and I imagine that it largely depended on who showed up that afternoon.

Cresmour was filled with Italian-Americans – Beltrante, Coliezzi, Cosenza, DeCarlo, Delia, Felizzi, Frangelli, Lampone, Menna, Nunzi, Oteri, Tomasco, Volpe, and so on – as befit the neighborhood where they played, though they did have a pitcher named Lopez and at one point there was a pinch-hitter named Daly who I am pretty sure was not Delia though sportswriters from that era were not the most careful people when it came to that sort of thing.  Their home field was at either 20th or 26th and Patterson (the sportswriters weren’t all that careful about antecedents either).  And once in a while my grandfather would be singled out in the two or three sentence clippings, mostly for his hitting.

Someday I will look up what, precisely, was a “bingle” in this context – there was a game where it was deemed noteworthy that he hit three of them, and the term crops up attached to other hitters as well – but my guess is that it is not a home run.  My grandfather had the size and build of a contact hitter, and there is a reason Babe Ruth did not play shortstop.

None of the clippings have any information on them beyond the games themselves – final scores, personnel, box scores, occasionally a sentence or two if anything interesting happened at the game – and once in a while an invitation to other clubs to write to the manager (address provided) to get on their schedule.  There are no dates and no indication of what newspaper they’re clipped out of, though given the duplication of clippings on certain games it is clear that there are several newspapers represented.

This was back when there were several newspapers in a city, kiddies.  That used to happen before the media corporations ate the competition and the internet ate the media corporations, and it was a sign that people actually wanted to know what was happening in their world rather than simply have their prejudices confirmed in such a way as to polish up the nice shiny ideological bubble in which they live.  It was a different era, in other words.

The down side to that kind of active and informed citizenry, however, is that it makes tracking down sources that much harder.

I thought I’d do a bit of googling and come up with some historical context in which to situate that photo and my grandfather’s story, have a nice little story, and be done with it.  But having noodled around the internet for the better part of the day (and being suitably impressed by one sportswriter’s inclusion of the phrase “clinch the gonfalon” in his description of a neighborhood sandlot baseball game), it appears that information on Cresmour A. C. is going to be considerably harder to track down than I thought it would be.

Everyone needs a hobby, I suppose.

Only In Gloucester City said...

Hello. My grandfather had also played for Cresmour in '32 (possibly other years). I'd love to share any info for photos I may have.

That's really cool! If you email me at the address on the left side of the blog (david4q10d@charter.net) we can continue this discussion. My grandfather left us a scrapbook with some box scores from Cresmour games, including full line-ups so if they overlapped we can tell.

I look forward to hearing from you.