1. It’s cold here in Baja Canada.  After a December that felt like May and a first week of January that felt like October, it is clearly winter now, with highs in the single-digits Fahrenheit and sub-zero lows.  I’ve got my teakettle and my warm clothes, however, so I’m prepared.

2. It’s hard on the chickens, though.  Poor ridiculous things.  We go out there every day to check in on them and retrieve the eggs (sometimes too late – one froze through on us the other day and cracked open).  They’ve got heated water bowls and a pen full of things to bunker down into, though, so they should be fine.

3. Somewhere back there I hit the magic half-century mark.  We didn’t do much about it, which was what I wanted.  On the actual day the four of us went out for what has become my traditional birthday dinner at the local barbecue restaurant.  And when we were in Philadelphia we stayed in for the even older traditional birthday dinner of ravioli with my family, a routine that stretches back to when I was in high school or possibly even before.  There was also a flourless chocolate cake, and we included Tabitha in the celebrations since she had a birthday in there too.  Food, family, and good times.  That’s what birthdays are to me now.  I like it that way. 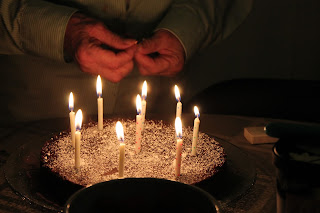 4. When my dad turned fifty, I was a college graduate.  My oldest is in 10th grade.  For some reason, this fact sticks with me.

5. Last night was the band concert down at Mighty Clever Guy Middle School, and I got to see Lauren do her percussion thing.  She did a very nice job of it, and even had what amounted to a couple of measure-long solos where you could hear only her playing.  Well done, Lauren – I’m proud of you.

6. Lauren’s concert meant that I missed the final State of the Union address from President Barack “Zero Fucks Left To Give” Obama.  I understand it was good, as I would expect from him – he’s one of the three post-WWII presidents whose oratorical skills transcend their politics (along with Kennedy and Reagan), and he has a solid record of achievement in the face of mindlessly rigid partisan opposition to back up his words.  He’s been one of the better ones, really.

7. If you think of it as financial planning, then the lottery is clearly a tax on people who are bad at math.  If you think of it as entertainment, however, then it’s just an expense that you budget for, much like going to a movie.  Every once in a while I throw in my couple of bucks and buy myself two or three days of conversation about what I’d do with all that money – I could do it for free, as a friend of mine pointed out, but having at least a random chance of winning gives those conversations an edge.  And at this stage of my life, I can afford a couple of bucks for that.

8. I’m not really sure I want to win $1.5 billion, though.  That kind of money is a full-time job and then some, and a fairly impermeable barrier to most kinds of normal life.  So if by some fluke I do end up winning, won’t I be in for some strange times?

9. I should clear out the remains of last semester before this semester really gets going.  Right now my office is stuffed to the gills with paper and there are things I’d like to locate that are currently somewhere in the archeological record.  But that is a thankless task that benefits nobody but myself, which means that putting it off is surprisingly easy.

10. It’s hard to get things done when quite literally everyone responsible for getting those things done is no longer employed at the place where things need to get done.  #thanksgovwalker
Posted by David at 9:48 AM