The living room smells vaguely like a bordello right now, or at least what I would hope a bordello would smell like – a sickly sweet and intensely floral kind of scent meant to cover up all kinds of sins, both figurative and literal.  I’ve never actually been in a bordello, though, so I don’t really know what they smell like.  I’m going with floral.  That’s my story and I’m sticking to it.

This is the direct result of the fact that we had our last Christmas celebration of the season yesterday, up at Kim’s parents’ house.

Christmas for us is a rather extended celebration stretching over several weeks, for which we make no apologies whatsoever.  You’re supposed to get together with friends and family, to the extent that you can or wish to, and we both can and wish to, so that’s what we do, calendar be damned.  And while the celebrations on my side of the family are Italian-inflected, the ones on Kim’s side have a definite Ukrainian feeling.

It was a busy day and a long one, one that started with the girls at a 4H meeting at 8:30am (on a Saturday!) and continued on through curling practice while Kim and I got everything packed and ready to go.  There were cookies and gifts and all sorts of things, and it is a good thing that we have a minivan now.  Minivans are basically suitcases with engines, and three cheers for that, I say.

We made it up to Grandma and Grandpa’s in mid-afternoon and eventually a large portion of the clan gathered as well.

There were immense quantities of really good food.  I personally ate enough dinner that I really wasn’t hungry again until this afternoon and then only out of habit.  This meant that I kind of missed out on the various desserts on offering, including several that we brought ourselves (Swedish Chocolate Balls!), but I’m probably better off for it.

There were also gifts.  Those went well. 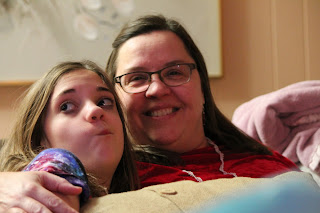 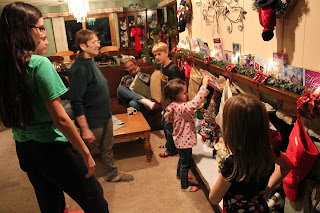 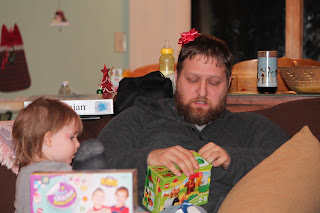 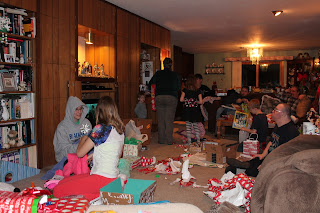 The gifts go to the kids these days, though.  The adults play the Dice Game, where you bring two wrapped gifts to the table (one goofy, one not so), divide them into six piles, and roll a die until everyone ends up with two things in front of them.  At that point we set a timer and get two pairs of dice, and if you roll doubles you can swap for something else.

So you never know what you’ll end up with.

I ended up with a wax melter.  I’m not really sure what to call it besides that.  It probably has a cute little name like “Mood Mellower” or “Relaxomatic,” but I refuse to get up to check right now so “wax melter” is what you get.  It’s basically a little electric heater inside of a decorative ceramic cylinder, with a small bowl at the top.  It comes with an assortment of little cubes of scented wax (“Holiday Baking,” “Mountain Meadow,”  “Bordello,” and so on), and the idea is that you put one of the cubes in the bowl and as it melts it makes the whole place aromatic.  Lauren insisted that I not trade that one away and – surprisingly – nobody took it from me.  So there it sits, transforming our living room into something that should probably have a lot more red velvet trimmings than it does.

Merry Christmas, one and all.
Posted by David at 8:27 PM