We’re back in the chicken business.

For the last several years Lauren has been part of the 4H poultry project, which is why we have a slowly growing flock out at our friend’s barn just west of town.  Right now there are two roosters – who seem to get along just fine, oddly enough – and five hens, and they provide most of the eggs and absurdity that we need to get through the days.

But you can’t show the same chickens two years in a row, according to the 4H folks, so every year we invest in new chickens. 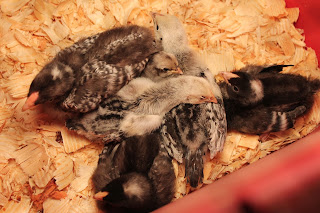 Kim and Lauren came home today with six chicks.  There are three Speckled Hamburgs, two Dominiques, and one Blue Rosecomb Bantam, which is the tiny one in the middle.  Bantams are kind of useless as far as egg production goes, unless you're interested in a 45-egg omelet that fits in a regular-sized frying pan and feeds one, but we figure Rosie will like her, assuming she survives her term as the designated floormat for the other chicks.  Chickens are not the most thoughtful animals.

Right now they’re living in a red plastic bin in our living room, where it is warm and dry, and they’ll stay there until they’re big and hardy enough to shovel off into the barn.  We’re not even scofflaws now that the chicken ordinance has passed here in Our Little Town, and I suppose there is even an outside chance that we’d put up a chicken coop in our backyard, though you can’t keep roosters and at least one of the chicks is probably a rooster – you can’t tell at this age – so that might not be worth the trouble.  But we could.

There will likely be more chickens coming at some point.  You’re allowed to show up to six different birds, I believe, though only two from each breed.  So more chickens.  And there will be turkeys as well.  More chicks, more birds, more, more, more.

There is a reason Lauren insisted I write a blog post with the title this one has.  We just attract these things.

Right now the main issue is to keep the chicks warm enough in the winter and fenced off from prying cats, who see them as mobile snacks rather than future ribbon-winning projects.  You’d think the cats would be used to it by now, but that assumes that they can hold a thought in their heads from one year to the next and that theory crashes and burns once you get to the word “thought,” really.  The “one year to the next” part is just there for comic effect.  As long as we can keep the chicks warm and cat-free we’re probably okay.  Chickens are much sturdier creatures than turkeys, oddly enough, so they’ll survive until there is a conscious decision to make them not survive.

Speaking of which, we’ve had chicken for dinner for the last two nights.

Because that’s how we roll.
Posted by David at 7:52 PM