We left Wisconsin shortly before dinnertime, because that’s what you do when you can’t leave before school ends and if you wait until the next day you might not get there before the holiday starts.  Not that the holiday would start without us, really – my family has a “Moveable Feast” tradition wherein holidays happen whenever you have time for them, so they start whenever all of the principals show up and continue until we all get tired of it – but still.  Christmas Eve is a big deal for us, and not having to be on the road for it was nice.

We got to Ohio before we decided that was enough for one day.  Ohio is the nation’s waystation, being neither here nor there but pleasant enough in between.  Our hotel was new – one of those places that you get to by driving down a road lined with things that haven’t quite been finished yet – and we checked in late enough that they gave us the extra wide room.  Seriously – it was a yard wider than any hotel room I’d ever been in, and for a while I was convinced that this was just how things went in new hotels until Kim enlightened me as to the concept of a “handicapped access room.”  I guess showing up around midnight qualifies you as at least kind of odd, which is close enough for hostelry if nobody else has reserved the room already.

The next day was a long drive though what appeared at times to be a monsoon rain but which – we kept repeating to ourselves – was not snow.  How could it be snow?  It was 60F out there, and getting warmer.

It was nearly 70F on Christmas Day in Philadelphia.  It’s a good thing that the climate isn’t changing, because otherwise?  I’d be worried.

This was our year to head east for Christmas, and we had a grand time.  It was a low-key sort of holiday, but a happy one.

There was much celebrating and eating of good food. 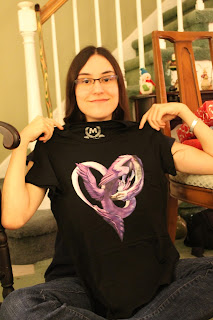 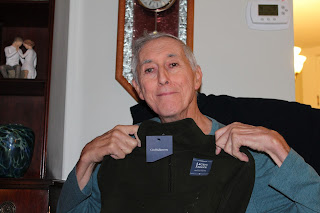 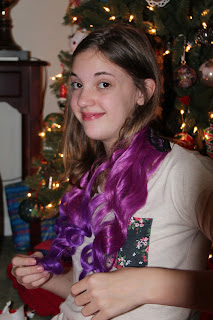 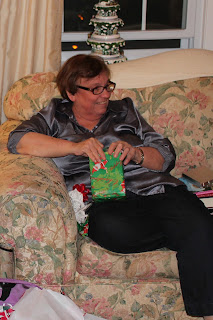 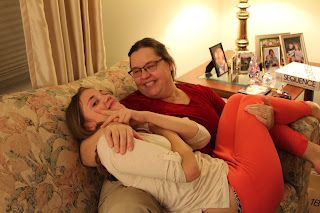 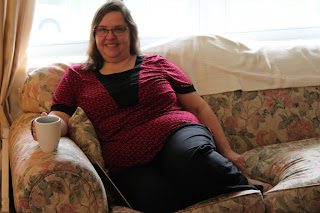 There were also the traditional card games.  Lauren beat us all at Phase 10.  I need to send that kid to Vegas, truly I do. 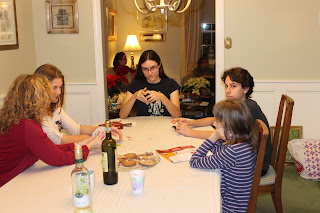 And, since this is the 21st century, there were a plethora of screens to look at. 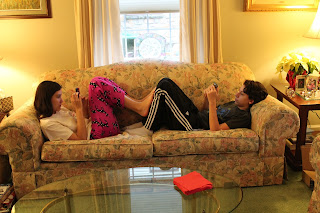 We ate and hung out and generally had a good time just being together as a family.  And then on Christmas Day we did it again.  Rolane and Steve came over to add to our festivities, and my friend Jenny brought her two boys over as well.  Holidays are meant to be spent with family and friends, and we enjoyed both.  It’s still kind of odd that my uncle’s side of the family now gathers in Tennessee due to logistical concerns – we’ve grown into too unwieldy a group to put all in one place for anything less than a wedding these days – and we missed them.  But a good time was had.

We spent the next couple of days together as well.

Our big excursion was to head into Center City to see some of the Christmas displays and have lunch at Reading Terminal Market, because food. 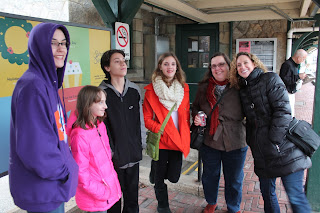 We took the commuter rail into town and got off near City Hall, which was open to the public.  They had even set up a little ice rink outside, and since it had cooled down to “Autumn” rather than “June” it actually was skatable.

Philadelphia’s City Hall is a great granite pile of a building, ornate in that excessive Victorian way, plunked down squarely in the middle of an intersection.  It probably sounded better at the pitch meeting.  But after over a century of renovations – some of them going back to before the building was completed – the place was humming along brightly with folks going in an out of the central courtyard, where the city had put up a huge tree. 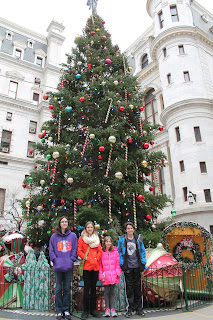 Our first stop was Wanamaker’s.  Yes, I know it’s Macy’s now, but I just can’t bring myself to call it that.

Wanamaker’s was one of the original department stores, built in an age when people dressed up to go shopping.  It’s a strange combination of soaring architecture and crowded floors, and right in the middle of it is The Eagle, a giant bronze statue of a rather incongruously fierce-looking predator staring menacingly out over the coat racks.  If you grew up in Philadelphia in the mid-20th century or know people who did, “meet me at the eagle” is a phrase indelibly etched into your consciousness.

So we met there. 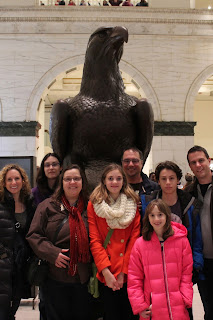 We went back there after lunch, actually, since they have the Christmas lights display in the main atrium.  It’s set to a soundtrack and was probably impressive in 1955 but really hasn’t been updated since.  We didn’t get to hear the organ, which was a shame.  The Wanamaker organ is one of the largest pipe organs on the east coast, and it is a thing made of pure awesome in the hands of someone who knows how to play it.

Reading Terminal Market was more crowded than usual, which is saying something.  There was no way the eight of us could stick together for a meal, so we split up into small groups to forage.  It is strange, in a way, that my daughters are now old enough that I can tell them to meet me somewhere in a crowded urban setting, but that’s what is supposed to happen as they grow up.  I have no idea what anyone else had, as by the time I found a place to eat I was on my own, but I had a burrito as big as my head and it was fabulous. 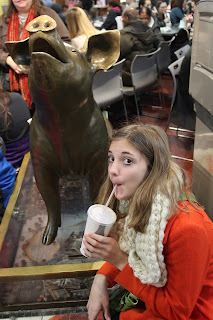 On the way out Lauren went shopping for thank you gifts for the friends taking care of her animals.  There’s a lot to choose from.  The chocolate rats on a stick and the chocolate noses were a big hit, though we later agreed that the noses should have been jelly-filled.

While we were in Philadelphia we also went to see the new Star Wars movie (told you I’d see it, didn’t I?).  And, as predicted, I enjoyed it.  It was fun, in a whiz-bang “entertain me” kind of way, unburdened by the heavy mythos that George Lucas seemed to feel was the interesting part.  We all gasped when it was revealed that the new Emperor was actually Prince Humperdink in a blacklit bathrobe (hey, evil overlords have warm fuzzies to relax in too!), but really the fact that Kylo Ren had six fingers should have tipped us off.