Twilight of the Turkeys

It’s getting kind of melancholy out at the barn.

The County Fair starts officially next week, though the judging process starts tomorrow.  We’ll be there with Lauren’s photography and visual art project and Tabitha’s sewing project, and we’ll get the exhibitor wristbands that allow the girls to come and go as they please without paying admission every time.  Then comes barn set up on Saturday (poultry and rabbits), more judging on Monday (Tabitha’s artwork), and on Tuesday we load in Lauren’s animals – the chickens, rabbit, and turkeys.

The chickens and the rabbit will come home when it is all over.  Depending on how efficient the whole process is, the turkeys may not.  Norman – the tom – will be sold at the Fur and Feather Auction, and Jamaica – the hen, generally referred to as Maica – will likely not long outlive him.  That’s how it is with livestock.  We never planned to winter them over.

Lauren’s okay with this in broad outline.  We’ve discussed it with her, and she understands how it works.  She’d rather not eat these particular turkeys come the holidays, and that seems fair.  Someone else will get to do that.

The thing is, though, that while Norman is a big, lumbering boulder of a bird with about that much personality to him, Maica has got some zip to her.  She tracks you and stares you down.  She nibbles at whatever she can grab.  She’s kind of fun.

And their time is so short.

It’s a good lesson, really.  Treasure the time you have with the creatures you care for, as it is always shorter than you’d like even if it is planned.  And that goes doubly for the people in your world.

We’ve taken to letting them roam a bit more these days, out on the grass.  They don’t go far – they’re flock animals, so they stick close together, and mostly they want to be wherever we are.  Several times they’ve startled the chickens by wandering into their pens while we were feeding them.  They mostly seemed curious.  They’re big, amiable birds that way, and it seems right to let them have a bit more freedom here in the twilight of their summer. 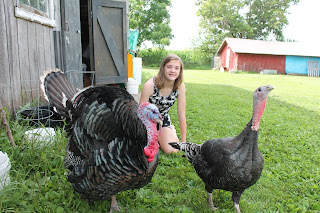