I’ve been on Facebook since 2008.  Like most new things that involve any digital technology at all, I was not an early adopter nor was I all that interested in joining.  Indeed, it took Kim several weeks of concerted effort just to get me to consider it, and another couple of weeks of lurking on her profile to make me think it was something I was willing to do.

Now, of course, I’m an addict.

For all of the many and valid criticisms people make of Facebook, it has more than proven its worth to me.  I have reconnected with friends I hadn’t seen in years.  I’ve become closer to people I was still connected with.  It has been a conduit of communication for friends going through rough patches in their lives, and a way to provide comfort and assurance even if all that meant was checking in to say hello.  It has been a way to share joys as they came up.  It has become the default method of planning events and organizing large groups – both scattered across the country or the world and, surprisingly enough, just locally here in Our Little Town.  And it has replaced email as the place where the jokes get passed around.

It’s not cool, Facebook.  My children tell me that all the time.  We have told them that they need to get accounts just to keep up with a) us old people and b) the groups that need to be organized (such as 4H, which does a surprising amount of business on Facebook), and they have grudgingly accepted this ultimatum even though all the cool kids are on Instagram or Snapchat or Twitter or some other service that would instantly become uncool if I were ever to join and might have already become so merely by my mentioning it here.

I also understand that Facebook is a free service and that, accordingly, I am the product and not the consumer.  It’s been worth it to me. 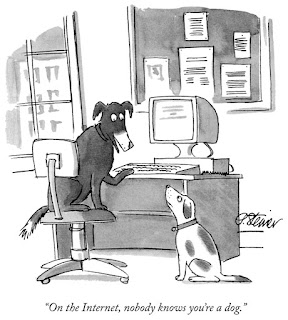 On the one hand, this is probably not a bad idea – there are a lot of cowards out there hiding behind anonymity as trolls and abusers, and cracking down on them is a good idea.

On the other hand, there are also a lot of people out there who have legitimate reasons for using alternate names.  Some of them are hiding from the trolls and abusers.  Some have alternate identities for alternate situations – one for work friends and one for non-work friends, for example, or they have a “gaming identity” for online games.  Some just don’t wish to be known to a wider public, but still want to take part in the online community.  In an online world were simply being female makes you orders of magnitude more likely to be harassed than being male, sometimes people just don’t want to spend their time dealing with assholes.  There are a lot of valid reasons for aliases, is what I’m saying.

So there is a need to make some finely honed judgments in these matters.

Unfortunately Facebook has become such a juggernaut, such a massive and impersonal force, that getting it to make those finely honed judgments is nearly impossible.  Hell, I’ve run afoul of Facebook myself.  During the Great Wisconsin Putsch of 2011 I posted so many political links that I was actually forbidden from making any further posts on my own account for days.  There was nobody to complain to.  Nobody even to explain the decision to me.  I sent off questions to the various help line slots and got exactly nothing in response.  Eventually they decided I must have been chastened and relented, except all that happened was that I learned to be sneaky and lost most of my respect for them as an organization.  They’re useful, but no more.  All this from someone who kept his account and still uses it, too.  Not like my friend.

I don’t really know why my friend chose to have an online alias with Facebook, and frankly I don’t regard it as my business to ask.  I got to know them under that name, and they have been perfectly fine to me under that name – friendly, honest, and fun to have around.  I’ve even gotten to know them a bit better in the present crisis, and everything I’ve learned has made me like them more.

I do not like it when my friends are not treated well.

This whole situation makes me so angry that all I can do is scream, "Argleblargle!" and shake my fist at the sky cloud.

You describe very well how Facebook is so useful to us older folks. Addict here, too. I've always used my own name -- at least it's the nickname everyone knows me by. It's a mixed bag. Bad for people like your lost friend. Bad and good in that it makes me more circumspect in what I post, lest unfriending sprees ensue.