We’re back up to our full complement of rabbits now.

Milo, Milkshake, and Maybelline live in their hutches out in the back yard.  They are not luxury accommodations, but then they are inhabited by rabbits and – last I checked – rabbits are not all that interested in Danish Modern furniture or high-end electronics.  They’d probably chew on that sort of thing, and the furniture would end up looking like “College Student Eclectic” and the high end electronics would simply electrocute them.

So rustic it is.  They seem happy.

Except when they get a chance to escape, as happened over the weekend.  Milkshake and Milo share a common set of doors that need to be latched, and if they aren’t latched then the rabbits can push the doors open and jump down to the ground.

They’ve done this before, and mostly we find them hanging around the hutch with a slightly dazed expression on their faces, which is kind of hard to tell apart from the normal expression that rabbits wear unless you know them pretty well.

This time, however, was different.  Milkshake and Milo are both guy rabbits, and when it’s just guys they can be stupid together without causing too much harm to anything.  But Maybelline is a girl rabbit.  When two guys are set loose in front of an available female the stupid can get ramped up to toxic levels remarkably quickly, and it’s the same with rabbits.

This is why we woke up Friday morning to a lawn full of rabbit fur and a dazed and vaguely triumphant-looking Milkshake standing woozily by the empty hutch.  Milo was nowhere to be seen.

We looked for him, of course.  We looked at dusk and at dawn, when rabbits are most active.  We looked in the black raspberry bramble and the brush pile.  We left tubs of water out for him.  We thought about calling his name, but quickly realized that he is a rabbit and only marginally more intelligent than the chickens.  It’s not like he ever came when called before.

And then, just as hope was running out on Sunday, one of the neighbors behind us knocked on our door with Milo in her arms.

There was much rejoicing.

So now he’s back, safely locked away in his hutch.  We’re not sure what Milkshake thinks of all this, other than a sad sort of resignation about having to do it all over again next time they get out, but Milkshake will just have to deal with it.

It’s good to have you back, Milo. 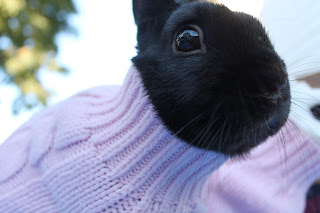