Further Bulletins from the Fair

I had chicken for lunch today, because I could.

They’re wonderful little birds, really they are, but after a while you just have had enough of the beady-eyed little things and you find yourself saying to them, “You know what you are?  Vehicles for condiments, that’s what you are,” and pulling into the nearest drive-through line for a box of deep-fried chicken bits and as many of those little vats of sauce that they will give you for free.

And that's when you know you should probably take a short break.

The Fair is now in full swing around here, and my hasn’t it been a time.

We didn’t have anything Fair-related to do on Sunday.  Well, not officially.  There were still projects to finish and animals to prep and any number of things to think about, collect, organize, and/or stow away.  But the actual Fair-related things didn’t happen until Monday.

Actually, Monday’s story goes all the way back to Saturday.  It’s a long story.  Bear with me.

Over at Local Businessman High School they have a summer musical program that gathers together kids from all over the southern half of the state to put on Vast Theatrical Experiences for the masses.  Being kind of theatered-out after the Shakespeare and the pick-up rehearsals for our 4H Drama Club’s performance at the County Fair this week (see how it all spirals in on itself?) I declined to join Tabitha and Kim when they went on Friday.  Naturally, they came home raving about it and Kim more or less ordered me to go see it on Saturday night.  Tabitha joined me, and I will say that it was quite a production and we had a very good time.  There is a lot of talent around these parts.

But when we got home we walked into Crisis.

Milkshake, Lauren’s previous show bunny (now retired) had come down with some kind of vicious eye infection and looked like The Rabbit of the Living Dead.  He was not in a good way, and this being Saturday night there really wasn’t anyone to take him to go see.  So Kim and Lauren talked with the Rabbit Project person in our 4H club and began dosing him with the antibiotics we’d bought for another animal (which checked out as acceptable, according to reputable experts online), and we spent Sunday trying to take care of him.

Monday morning started at 7:30am with a call to the veterinarian, who saw us an hour later.  He said to keep doing what we were doing, gave us some better anti-inflammatories than the Children’s Ibuprofen we’d been using, and told us to bring him back in a week to see if surgery is required.  He’s already blind in that eye, and it might be the best course of action anyway.  We’ll see.  He’s looking slightly better today, actually, so perhaps he’s on the mend.  We're hoping, anyway.  Poor Milkshake.

So that was much of the morning.

That afternoon I took Tabitha back over to the Fair, since it was her turn for Drawing and Painting judging.  She had three pieces in the mix this year, two of which she had been diligently working on for weeks and one of which was a last-minute substitution for a larger project that wasn’t going to happen and which she didn’t want to rush.  You have to have an entry for each category you sign up for, though, so she had to put something in.

Her mixed media entry got a Top Blue. 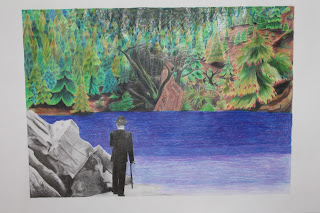 As did her watercolor. 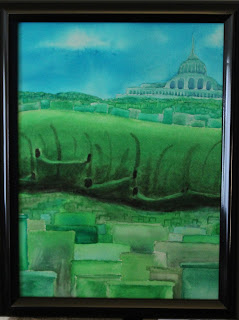 This means that both of them are eligible for either Merit or State Fair consideration, which would be quite a thing.  We’ll find out about them soon enough, I imagine, but two Top Blues is well done, I think. 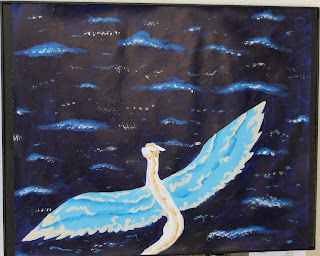 The acrylic painting got a Red, which isn’t bad for the amount of time she had to pull it together.  We were all pretty happy with the results.  Nice going, Tabitha!

The judging only took a bit over an hour, which turned out to be good since the rest of the afternoon was spent washing chickens.

Have you ever tried to give a chicken a bath?  It’s a surprisingly complicated process.

It takes four or five buckets of water, each of which has a different additive (poultry protector, glycerin, etc.).  They have to be kept at a relatively warm temperature so as not to panic the birds, because you’ve got a wet chicken in a bucket and adding “panicked” to that description just bodes well for nobody.  And then you have to wrap them in a towel so they dry off and stay warm, since they’re body temperatures are high and the air – even on a hot summer day – is cool 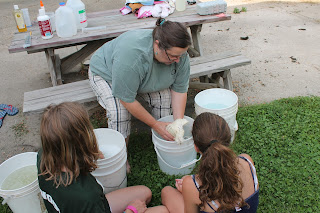 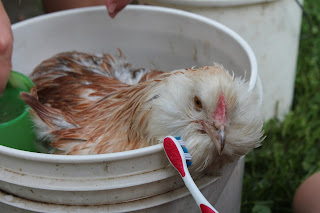 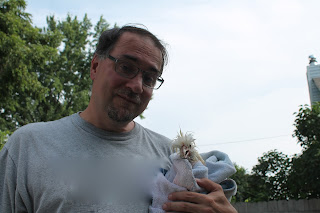 There is nothing on this earth quite as ridiculous as a wet chicken.

We shanghaied the birds to our own backyard for this, since the barn outside of town where we keep them has no running water.  Our backyard became a chicken-bathing assembly line.  And then we set up some enclosures for them in the garage, since returning them to the barn seemed counterproductive at that point.

This of course made us Chicken Scofflaws, since technically we are not allowed to keep chickens in Our Little Town.  But there comes a time when one must stand up to The Man and demand justice!  Liberty!  And freedom!  Besides, by 8am this morning they were no longer in our garage and we figured we could get away with it.  And we did.

We are such renegades.

Monday night was time to get Maybelline over to the Rabbit Barn.  Since our usual rabbit travel carrier was serving as a recovery room for Milkshake, we ended up taking her over in an old bamboo shopping basket that Kim’s grandmother left us.  It says “Made in Occupied Japan” on the bottom.  It’s really cool, actually. 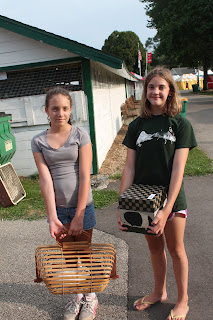 Getting the rabbits loaded in is always a time-consuming process.  You stand there in line, not moving and wondering why, until you finally get up to the front and then you understand.  Every rabbit – and people often bring six or seven of them – has to get examined, noted, and recorded.  The tattoo on their ear gets announced and written down.  And then the next one happens.

But we got Maybelline situated and Lauren’s rabbit paraphernalia put away in the bin with our club name on it, and then we were good for all Fair-related activities for at least twelve hours.

Bear in mind that the Fair still hadn’t officially opened yet.

This morning dawned bright and early, and fortunately the chickens were completely unaware of it in the darkness of the garage.  Particularly the roosters, who have begun to get their rooster on and crow now and then.  We don’t need that.

We loaded them into cages and then took the two big dog kennel cages that my friend Jon lent us and caravanned over to the barn where the turkeys were still residing.

It is surprisingly easy to convince turkeys to get into cages.  You just gently herd them along until they walk right in (Norman) or pick them up and deposit them inside (Maica).  It took two of us to get them into the cars – Norman goes a good 35lb, according to the estimate of the turkey expert at the Fair and Maica is not all that much smaller, and when you combine that kind of weight with the awkward bulk of the cages, well, two people is definitely the way to go.

Have you ever driven any length of highway with a turkey in the back?  It’s an experience, let me tell you.

We eventually arrived at the Fairgrounds, where we unloaded the turkeys first – I wheeled Maica in her cage on a dolly, while Lauren just herded Norman along to the barn – and then got the chickens situated in their end of the barn.

Then it was home, shower, breakfast, and off to teach my class, which is in its last week.  And you know what that means, kiddies!  That’s right!  Final exam on Thursday.  Grading.  Oh well.

We went back to the Fair tonight, mostly to hang out and enjoy it.  We ran into some friends.  We made sure the birds and the rabbit were doing okay (it’s hot here in Baja Canada today).  We ate food that we probably shouldn’t have eaten at our age.  It was a good time.

And tomorrow, we do it again.  Though the transporting of animals is at least for now complete.

For that I am truly grateful. 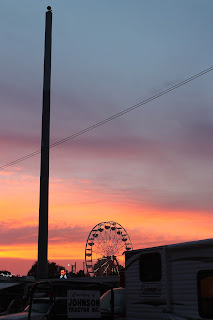 Took my big city (Portland OR) granddaughters to the fair yesterday aft. The 11 year old was anxious to see the rabbits and amazed at the size of the turkeys. I wanted to see the chickens and think we should be allowed to have them in town! The 13 yr old just wanted to get out of the smelly barns, sigh...

We had pie at the church's food booth since they had helped roll out the pie crusts last week and needed to do a taste test. The pie passed their taste test.

Loved the dragon and clouds in the art building.

It was too hot to even want to eat more fair food so we came home early.

You probably saw Lauren's rabbit and birds, then!

You get used to the smell of the barns. This big city boy (Philadelphia) no longer really notices it. We're working on getting an ordinance passed to allow backyard chickens, but it is slow going. Of course we'd still have the roosters, so I'm not sure how much good an ordinance would do - there is no iteration of that ordinance that would allow roosters, which I understand.

We ate royally and unhealthily and loved it, heat or no heat. :)