1. Well, now that the Women’s World Cup is over, I don’t know what I am going to do with my time.  It’s not like there are other things I should be doing, or should have done by now, or will likely add to my list of things to do, and I think I will stop thinking about that now.

2. It was a great tournament, though.  The final game was probably not fun for anyone who wasn’t a fan of the US team – seriously, four goals in fifteen minutes?  For those of you who are soccer-impaired, that’s roughly the equivalent of a 45-0 lead at the end of the first quarter of the Super Bowl.  But I was glad the US won, and I was even more glad to see so many well-played games throughout the WWC.  If you missed this tournament, you missed out.

3. Oh, and FIFA can go suck eggs.  They did everything they could to marginalize this event – from the artificial turf that forced players to run for 90 minutes on 120F surfaces to the amateurish refereeing to the fact that the outgoing Don of that organization didn’t even bother to show up for the trophy ceremony (which might have been because he’d likely be arrested as soon as his plane touched down, but that’s a whole other matter).  Plus it turns out that the championship team was awarded just under 6% of the prize money that the men’s championship team was awarded – barely more than men’s teams eliminated at the group stage went home with as a consolation prize.  I’m not going to go into any moral arguments for gender equality – honestly, it’s been my sad experience that moral arguments make no impression on those who don’t think gender equality is a no-brainer – but you’d at least think they’d consider the economic arguments.  Any organization as slavishly devoted to wringing every last penny from its fans as FIFA clearly is should recognize the folly of not encouraging 52% of the world’s population to join in the fleecing.  Expanding your markets, gentlemen – that, at least, you should be able to understand.

4. Tabitha has received her first paycheck!  Welcome to the working world, kiddo.  Next comes a debit card.  Eventually, when the euphoria has worn off, we’ll discuss 1040s.

5. Speaking of which, I spent about 45 minutes on the phone with the IRS this week.  According to the letter I got from them Lauren did not exist, and since she didn’t exist neither did the deduction for a dependent child so please pay this exorbitant amount within two weeks, thank you.  That’s a fine letter to receive the day before a holiday weekend.  It turned out I made a typo on her social security number back in April.  After about 20 minutes on hold, I ended up talking to a perfectly reasonable person at the IRS, and after another 25 minutes of questions, checking things up on other databases, confirming all kinds of identity information, and general repetition (this mostly from me), the problem was solved.  Easy.  I’ve had to deal directly with the IRS several times in the last decade or so, and I’ve never had a bad experience with them.

6. It was a busy holiday weekend, here in MURCA!  First we had family come up from Chicago for an all-too-brief stop on their way up north, and we had a lovely time with them.  They had a good time with the rabbits, chickens, and turkeys.  We had an awesome lunch.  And then there was ice cream.  Seriously – what’s not to love? 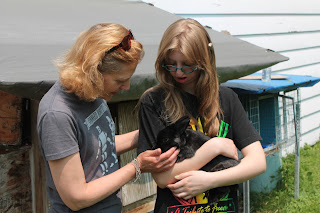 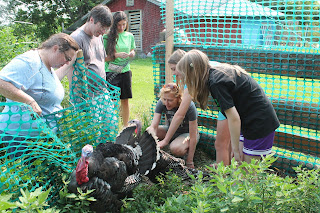 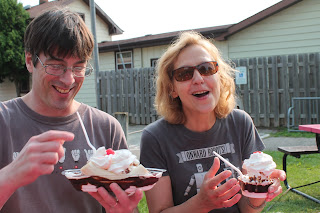 7. Then we had out annual cookout for the 4th.  More family came down, as well as a few friends, and there was food aplenty, beverages galore, and conversation all around.  We also walked over to the hospital to watch the city fireworks arc gracefully over the cardiac ward  (“Trust me!  They’ll love it!”).  Happy birthday, USA!  239 years and still working on the promises outlined in the Declaration of Independence.  We’ll get there, by and by. 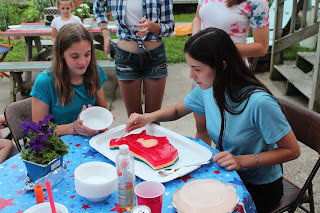 8. If I read next fall’s academic calendar correctly, every single one of my courses is going to be shortchanged one class period.  I suppose we didn’t really need to cover Reconstruction anyway, since the south refuses to admit that it existed even now.

9. I am being hemmed in by road construction projects.  Pretty much everywhere I try to go here in Our Little Town is ripped up, surrounded by orange barrels, and declared off limits to non-hard-hat-wearing personnel.  Eventually I will be trapped in my own house with nothing but books, tea, and the internet to keep me company, and, um, that would be fine.

10. I keep saying yes when people ask me to do things.  It makes for a busy life.

Nothing but books, tea, and the Internet would, in fact, be awesome. Lots of road construction going on here as well, making getting to certain places in town interesting, but I'm not being surrounded.

I like most kinds of black teas, and some come loose and some don't. My go-to tea these days is actually Yorkshire tea, which is an English household brand I discovered while visiting friends there (Julia and Richard). That comes in bags. It's great stuff.

I'm not much for green or white teas. They don't seem to have much body to them, no matter what form they come in.