On Food and Traveling

So having survived the County Fair relatively unscathed, my “eat less crap” diet plan took a big hit this month.  But really, that’s what vacation is for.  I’ll be eating a lot of non-crap for a while to make up for it in the next few weeks, in the fond hopes that it will all balance out eventually, but there are no regrets, none at all.

You’re supposed to do that sort of thing on vacation.

I will say that I stuck pretty much to my resolution to cut salty snacks from my diet.  I stopped eating potato chips, cheez-puffs, cheddar popcorn, and the like back in March when I got the finger-waggling speech from my doctor.  I didn’t realize how much of that I ate until I stopped.  And given that I’d been good for months and had lost roughly 8% of my bodyweight since then, I figured I could allow myself one small bag of something for the vacation.

I bought a snack-sized bag of jalepeno-cheddar cheez-puffs (note the carefully avoided “cheese” – how much actual cheese is in these things is a matter of scientific debate) on the way out of town, and kept it in the car for most of the trip.  It was nice knowing it was there.  I ate it on the way home.  Kim asked me “Are they spicy?”  “No,” I said.  “They have a nice zip to them, but I wouldn’t call them spicy.”  So she ate one.  “You’re broken,” she said.  “These are spicy.”

So now you know.

My downfall was not snacking but meals, because when one goes to Philadelphia one is required by law to eat as many cheesesteaks as possible while there.  And if there isn’t a law, then, well, there ought to be.  My children agree, which is just one of the many reasons I love them so.  We ordered our first cheesesteaks mere minutes after arriving at my parents’ front door, our last a few hours before we left to return to the midwest, and more than a few in between.

I think that means “I regret nothing.”  It could mean “Take out the trash, the invaders are almost here and we want the place to look nice for them” for all I know.  But I shall hope that Google Translate has not misled me any more than usual for now.

Why you can’t get a decent cheesesteak in Wisconsin – a state full to the brim with beef and cheese – is just one of those questions.  Some of it is the bread, as the concept of a crusty roll is somewhat alien to the midwestern mind.  The meat is never thin enough, chopped enough, or seasoned right.  It’s a relatively simple sandwich to make, but I’ve never had a good one more than 75 miles from the Liberty Bell.

So we stock up while we can, diet be damned. 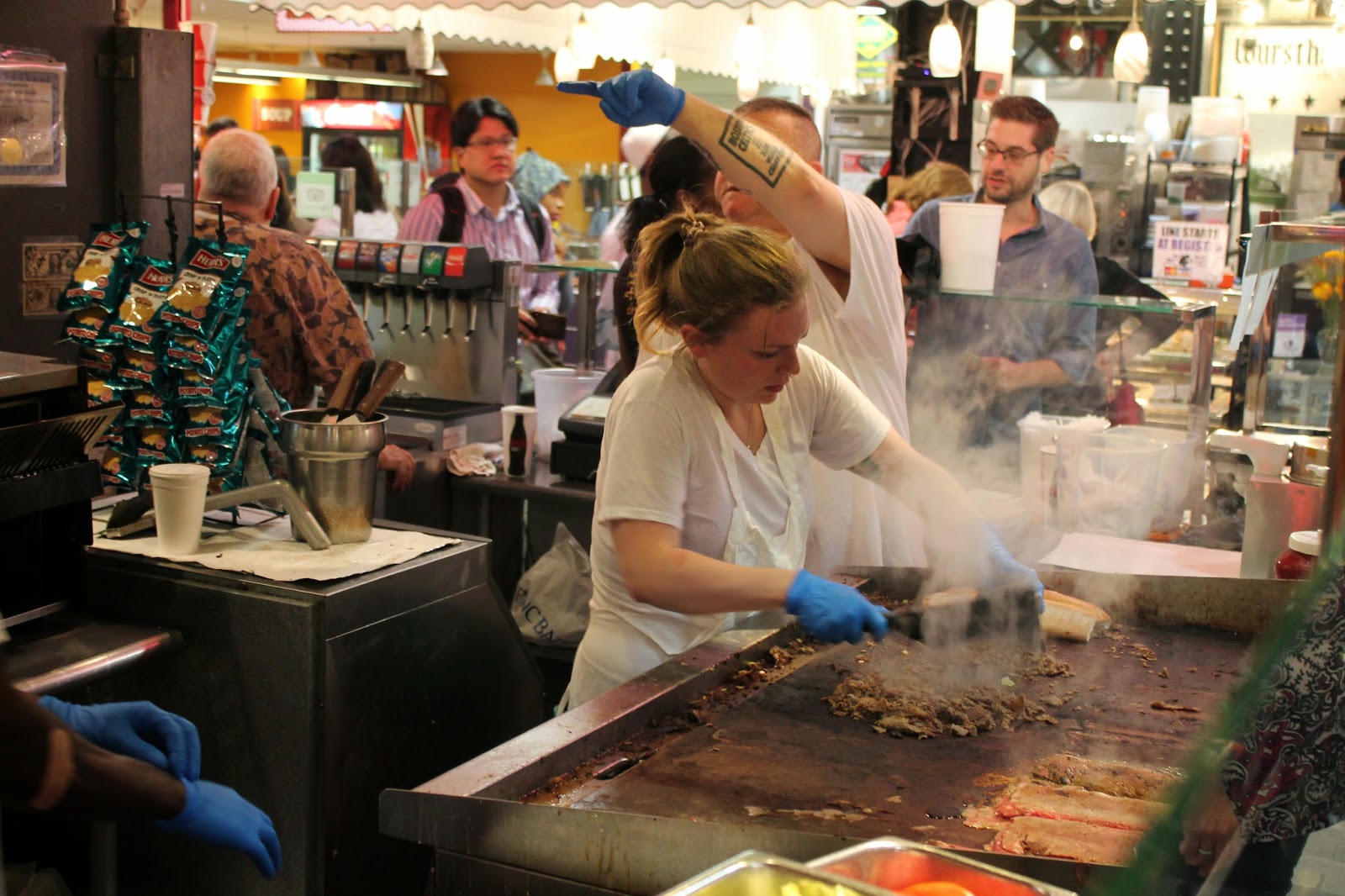 Oddly enough, when I got back and stepped on the scale I discovered that despite living on cheesesteaks for nearly two weeks I did not actually gain any weight.  Perhaps there is something to this whole “exercise” thing that people keep telling me about, given the amount of walking that we did while we were away.  I shall have to consider this, from the comfort of my chair of course.  One does not wish to rush into something like that.

It was a grand and glorious vacation.  We saw family.  We managed to get together with a couple of good friends – never enough, not even close, and we didn’t even try to catch up with everyone we would have liked to have seen (sorry!) as that would have only led to failed plans and heartbreak.  We visited historic sites, museums, commercial establishments, sand and surf, and a city that smelled like chocolate.  It was a good time.

Now we are back, and all of the things that we should have been doing all along are pressing down upon us.  Deadlines that went whooshing past need to be corralled and tamed.  Projects must be brought back into some kind of schedule.  Work has to happen.  Meals have to be prepared, preferably of the non-lethal variety.  Life goes on as before.

But for a while?