A Mystery, Wrapped in an Enigma, Covered in Feathers

We seem to have stumbled into something of a mystery with the chickens.

The County Fair is over now, and since we can’t show the same chickens two years running and next year will be an opportunity for new chickens, we have been trying to figure out what to do with Lauren’s flock.

Most of it has been surprisingly easy.

The three hens are about to start the process of going to our friend who has been letting us use her barn.  She has a flock of her own there, and they’ll get integrated into it over the course of a month or so and eventually she can sell the eggs back to us the way she already does with the eggs from her own chickens.  This is called the business cycle, and economists have spent entire careers trying to figure out how to make money off of it, which is why they are economists and not corporate executives.

Bean, the biggest and most aggressive of the six roosters, has already found a home with another flock somewhere down the road.  He is doing fine there, by all accounts.  Candy, one of the Bantam Cochins, has moved over one stall and become the resident rooster to another friend’s flock, there in the same barn.  He seems to be adjusting just fine, despite the fact that he is about 2/3 the size of the hens.  Maybe he’s just motivated.  Eventually this will turn into a rendition of the “two ducks and a giraffe” joke, which I am not about to repeat here.

Edward Scissorbeak has gone to his fate, unfortunately.  There’s not much you can do with birds with his condition, but he lived a happy life for the time he was here.

Rosie is everyone’s favorite – a chicken with a personality.  He’s sociable and friendly, and if you talk to him he’ll cluck back at you in a conversational sort of way.  You can also get him to perch on your hand like a parrot.  He’ll just sit there, bobbing his head in that robotic way that chickens have, until you either put him down or shoo him off.

Sully?  Well, he’s kind of our special-needs chicken.  He’s a pretty bird – all bright white and poofy – but even by chicken standards he’s kind of dim.  That’s something of an achievement, really, considering chickens are a standing refutation to Darwin’s theory of natural selection.  There is no conceivable way a chicken could ever be the fittest of anything.  Chickens, as noted earlier in this space, are what rocks would be if rocks were more mobile and less intelligent.  There are lintels smarter than your average chicken.

Sully is dumber than that.

But he and Rosie get along fairly well, and we will likely winter them over in the barn.  They can be the roosters for next year’s flock.  Plus they’re both kind of sweet and since they’re small they’re easy to handle.  We know why Rosie’s small – he’s a bantam – but Sully just seems that way for his own purposes, a physical reflection of his stunted mental growth.

That only leaves Birdie, the other Bantam Cochin rooster.

We tried sending him over to the neighboring stall, but he didn’t work out too well so we switched him out for Candy.  We can’t let him run loose with Lauren’s other chickens, because he gets aggressive and beats up on poor Rosie, though he leaves Sully alone, we suspect because he considers Sully beneath him.  So we’re in something of a holding pattern with Birdie.  Either he’ll find a new home or he’ll go the way of Edward, which we are trying to avoid if we can.  But that is the difference between pets and livestock, and there you have it.

None of this is the actual mystery.

When we first started having trouble with Bean getting his rooster on, we built a little enclosure in the corner of the stall.  It was fairly simple, really – just a pallet hinged on one wall and hooked on the other so you could open it if you needed to.  It left him enough space to move around a bit and still allowed him to be part of his flock.  Since he could fly over the pallet, we set another pallet on top.  It made a nice little pen.

The one small flaw in this plan was the fact that every other chicken (except Sully) would roost on that top pallet, raining down chicken poop on poor Bean’s head.  Sully, for his part, would perch in front of Bean’s pallet, poke his head through the slat, and just stare at him.  For hours.  Even as he too, was being pelted from above with chicken poop.  This is why we ended up taking Sully home for a few days before the County Fair.  Judges tend to frown on birds covered with a thick layer of chicken poop.

Not that it bothered Sully any.

Now that Bean, Candy, and Edward are gone, the pen belongs to Birdie.  He seems happy there, most of the time, though Sully has stayed at his observation post and the remaining chickens have continued to rain down poop from the top pallet, oblivious to the change in occupant.

So this is our situation:  One rooster in the pen.  Three hens (and two other roosters) outside of the pen.  The pen is secured shut.  We are fairly confident that other birds cannot get in, and even if they could get in they would likely not be able to get back out.  Birdie would have done that by now if that were easy.

There is a clear and impermeable (for values of “impermeable” which exclude chicken poop) barrier, in other words, separating the rooster in the pen from every other bird.

None of which explains how Lauren found two eggs in the pen yesterday afternoon.

They are small eggs, which could mean they came from a bantam (like Birdie) or just from a new layer (like the hens outside the pen) – all hens start out laying smaller eggs than they will as they get used to the process.  But they are eggs nonetheless.

This raises some interesting questions.

Is Birdie actually a hen?  That would be the easiest solution, except that he looks exactly like Candy (clearly a rooster), has been examined and judged by experts (all unanimously of the opinion that he is a rooster), continues to be aggressive toward Rosie (very much rooster behavior), and does crow now and then (more rooster behavior), though admittedly he does it in a rather unconvincing way, like it’s something he feels obligated to do for contractual reasons.

Could Birdie be some kind of hermaphrodite chicken?  An egg-laying rooster?  That would be interesting.  And possibly lucrative, given the right audience.  One suspects there would be a prevalence of either lab coats or banjos in that audience – or both, if one keeps an open mind – but money is money.

Perhaps one of the hens laid the eggs while the pallet above and they fell through?  We can’t figure out how they wouldn’t break, unless they each hit Birdie directly (Bantam Cochins are remarkably fluffy) and then rolled gently into a corner, which seems improbable for one egg and exceedingly so for two.

Did a hen get in, lay two eggs, and then escape?  We don’t think so, since all of the hens are considerably bigger than Birdie and if Birdie hasn’t escaped yet the hens wouldn’t make it either.  And why would a hen go to that much trouble just to lay eggs?  It’s not like it’s any nicer in the pen than it is in the rest of the stall.

Might the eggs have been laid outside of the pen and somehow carried in by the other chickens?  It’s theoretically possible – you can fit the eggs between the slats of the pallet – but mechanically difficult given the physiology of the average chicken and vanishingly unlikely given the amount of intelligence required (i.e. any) to pull off something like that.

And yet there are the eggs.  Incontrovertible in their physical reality, and definitely found within the confines of the pen.

It is a mystery.

Per request, here is Lauren with the eggs: 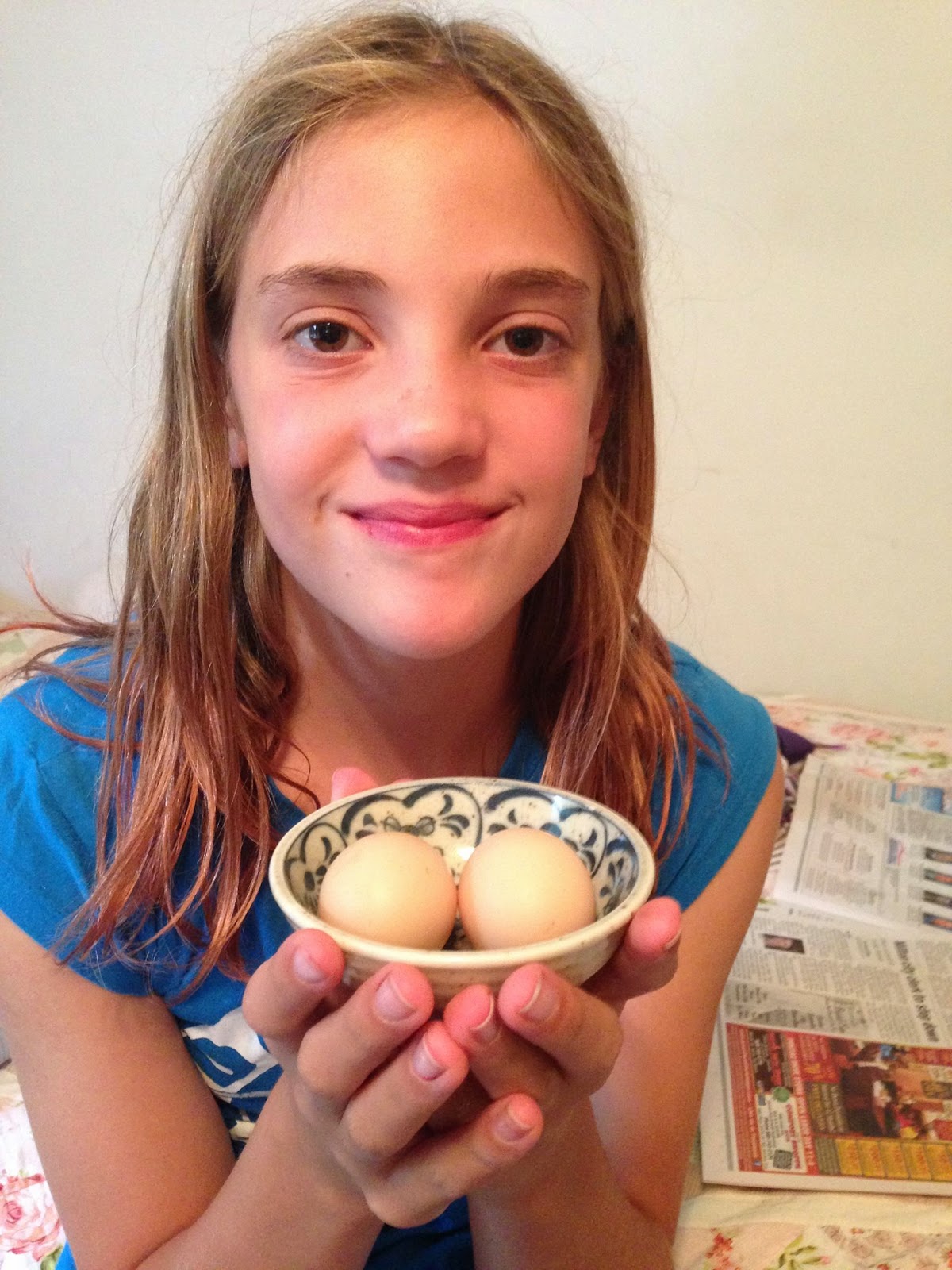 Lauren and Kim scrambled the eggs for breakfast and report that they were delicious.
Posted by David at 9:30 AM

Sputtering my coffee. Another blogger friend of mine is fostering three hens and a rooster. No one, apparently, explained to the rooster that he wasn't a pet like a little dog, as the man of the house carries him around while they inspect the garden.

I'm not sure Rosie or Lauren really understand that distinction fully either, though Lauren is better at it now that Edward is gone. Rosie just thinks he's one of us.

Sorry about the coffee. :)