Lucy the Elephant, the mascot of Margate, NJ, is the most overcaffeinated symbol of any town in America. 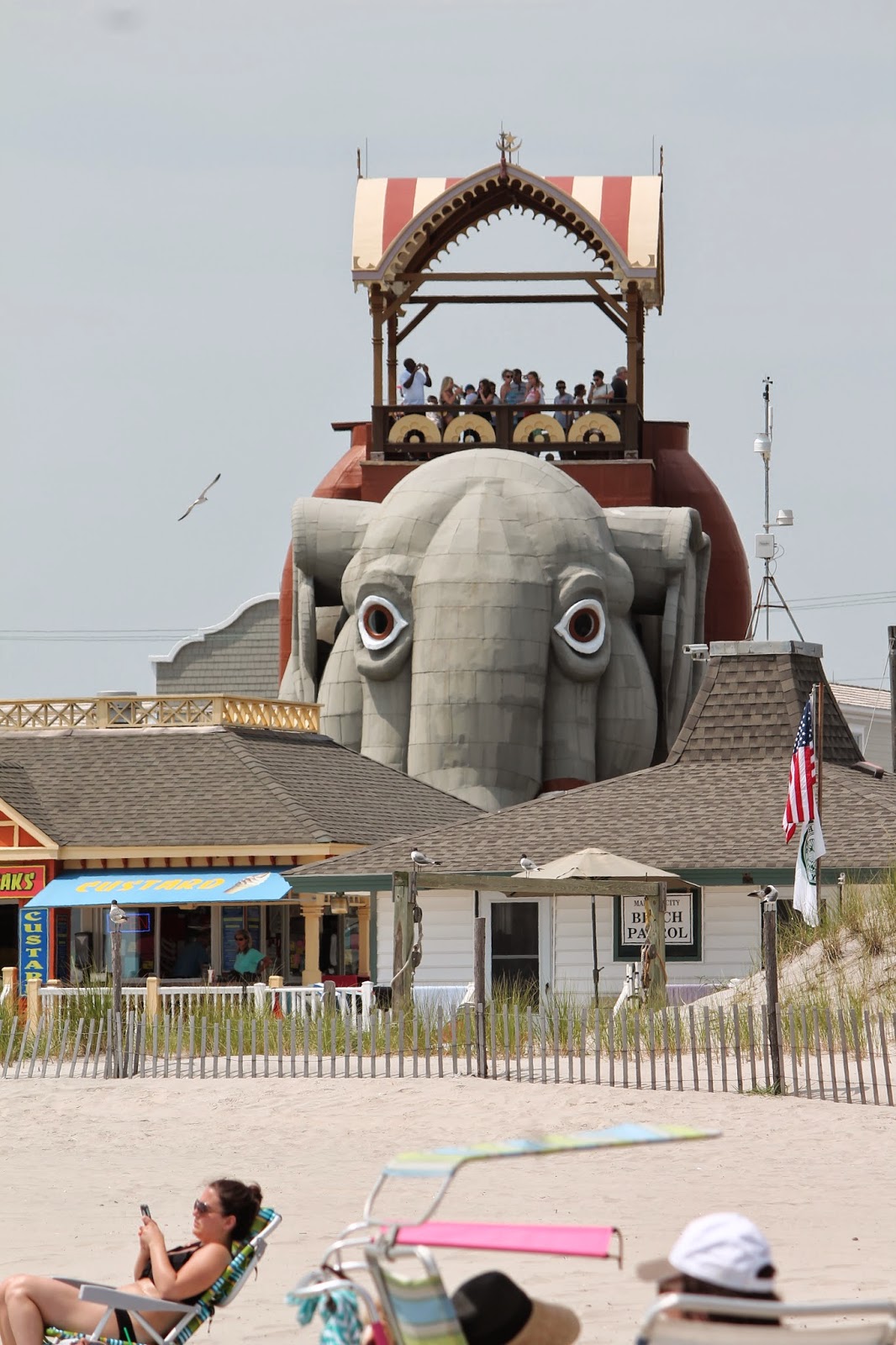 Seriously.  Somebody really ought to be looking into that elephant’s diet with an eye toward making significant revisions, though to be honest I don’t think it would work.  Can you imagine that little bit of dialogue?

“Has the elephant considered decaf?”
“Do you want to suggest it to her?”
“Regular it is.”

Never mess with an overcaffeinated elephant.  That is one of my many mottos, and it has served me well at faculty meetings on at least three different university campuses.

It’s even worse when you look at the water tower, a bit of public art that always sets my teeth on edge in sympathy. 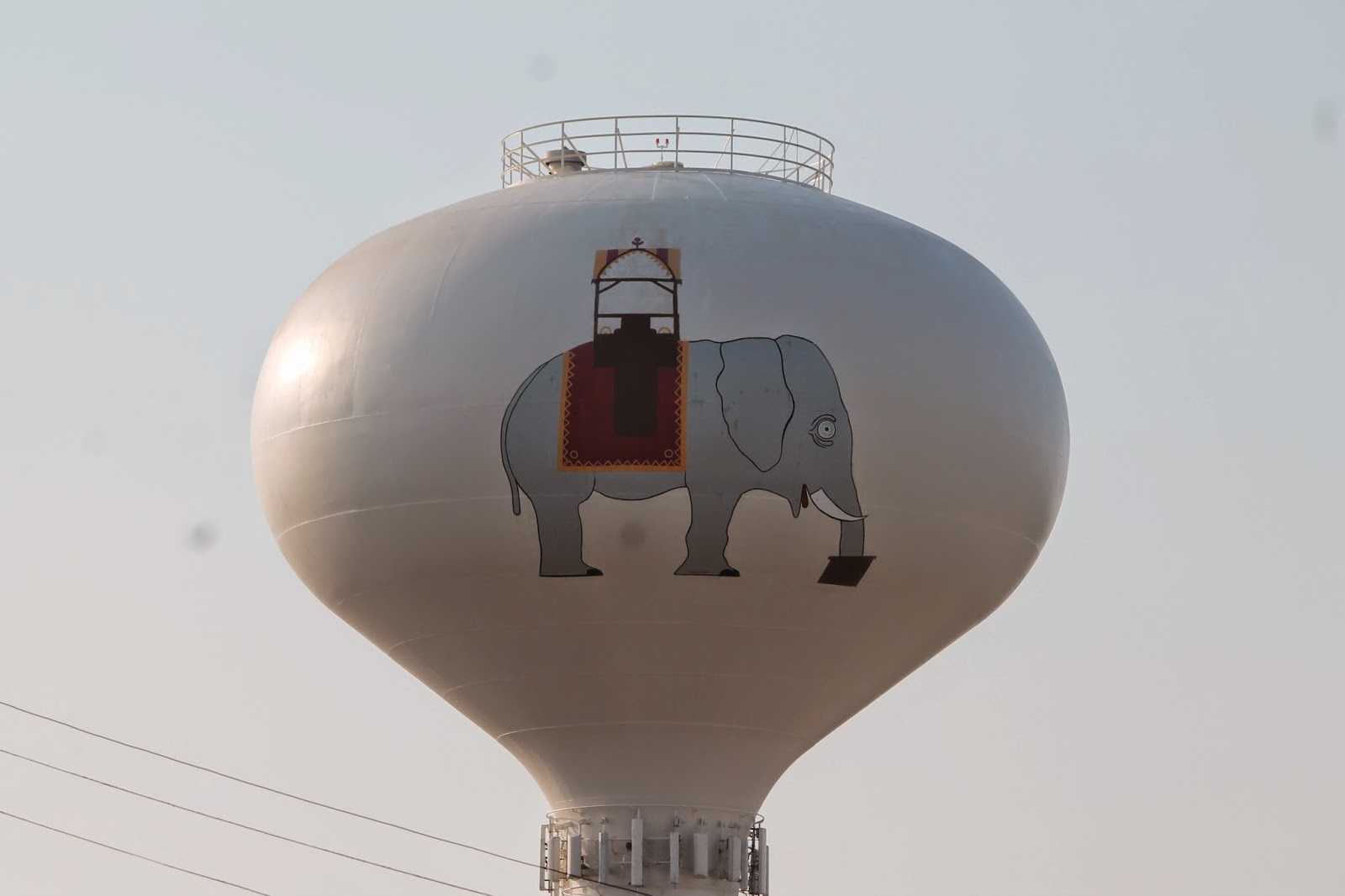 Been there, done that, eventually graduated and stopped doing that, and now if I tried to do that I would pop like a balloon on a gas station air hose.  There would be clean-up requirements.  Someone would have to figure out what to do with my books.  Best just to dial down a bit, really.

But Margate itself is a lot of fun.  For the second year in a row Rolane and Steve generously let us borrow their house down there on the bay for a few days, and we were glad to take them up on the offer.  The girls love the beach, and being midwesterners the opportunities to satisfy that love come few and far between.

There’s something about the beach that brings out the fun in kids.  You can get dirty – the place is full of wet sand, after all – and then you can wash it off and start over.  You can run around and shout and laugh as much as you want to and nobody tells you to be quiet or use your inside voice.  You’re outside, after all, and the wind and waves make enough noise that you sound about right screaming at the top of your lungs and they cause enough motion to make you fit right in.  You can get banged around a bit by the waves and laugh it off.  You can let the adults hang out in their chairs and read books or look fondly at the churning mass of younger folks and remember when they used to do the churning and their own parents sat on the chairs.  It’s a good time.  I’m happy to be the one in the chair these days, but I do recall many a summer out in the churn.

There’s also something about the beach that brings out the compulsive photographer.  And that’s not a bad thing, I think.

We set up camp right by Lucy the Overcaffeinated Elephant, because really where else would you go? 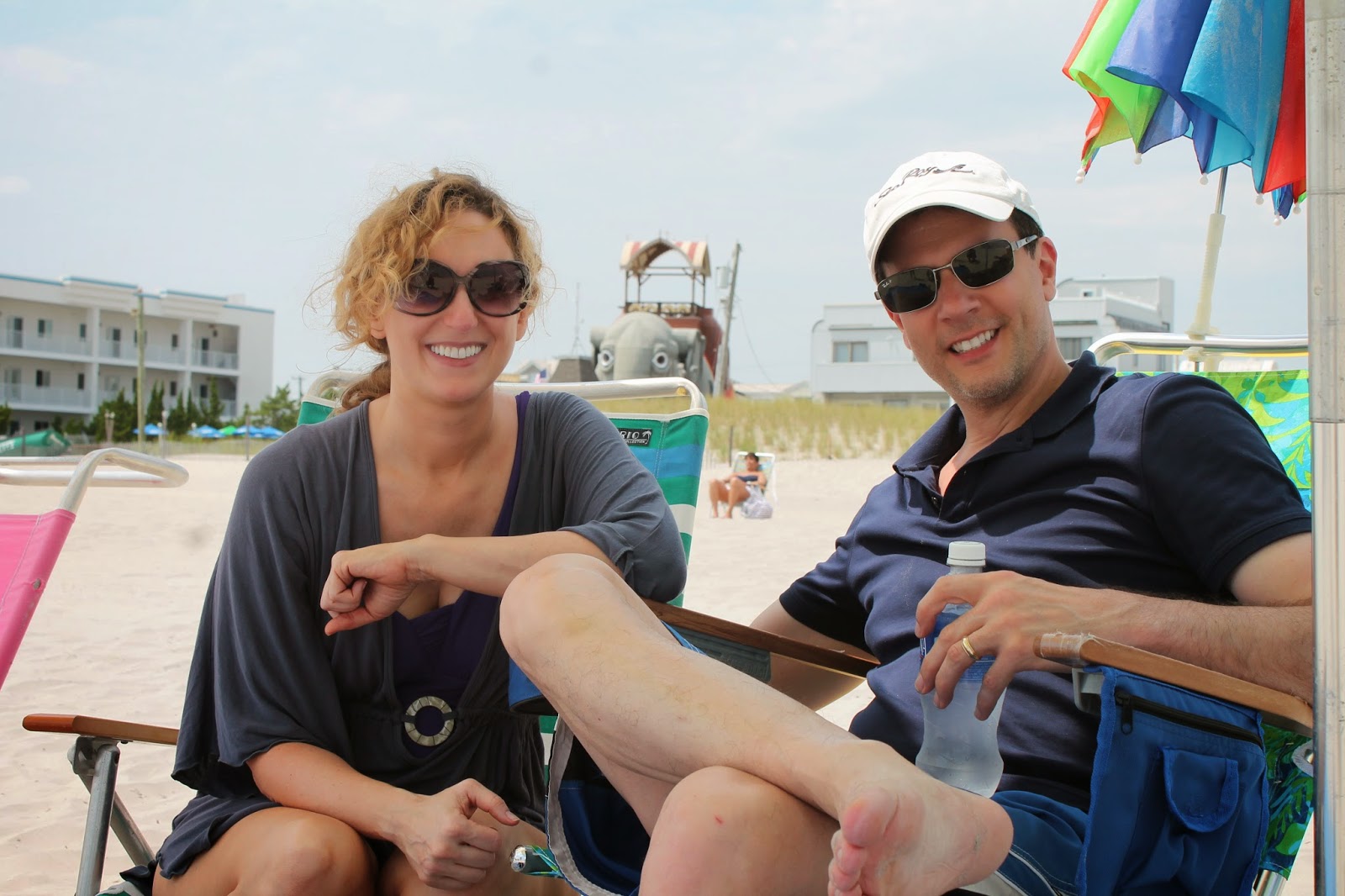 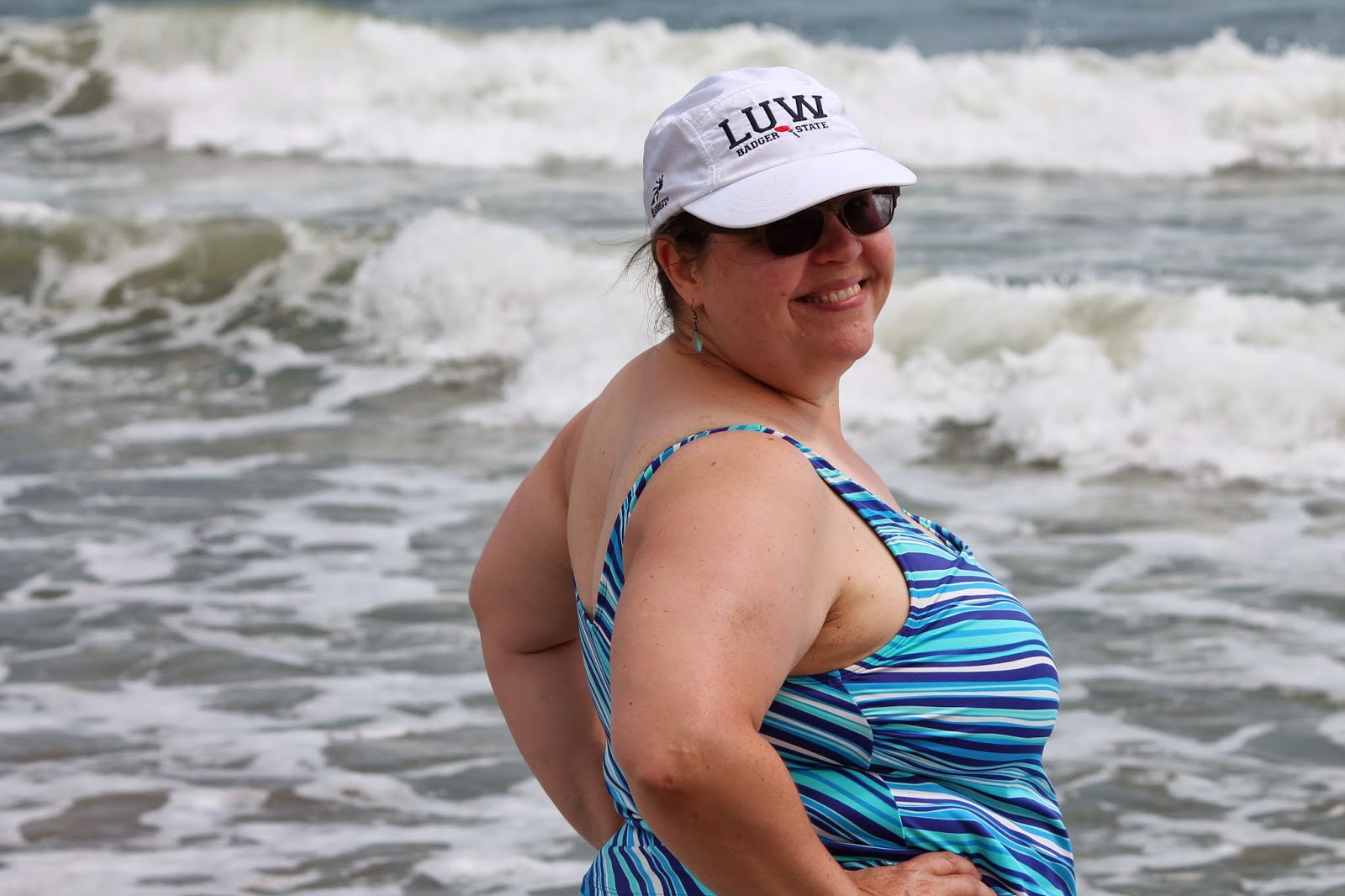 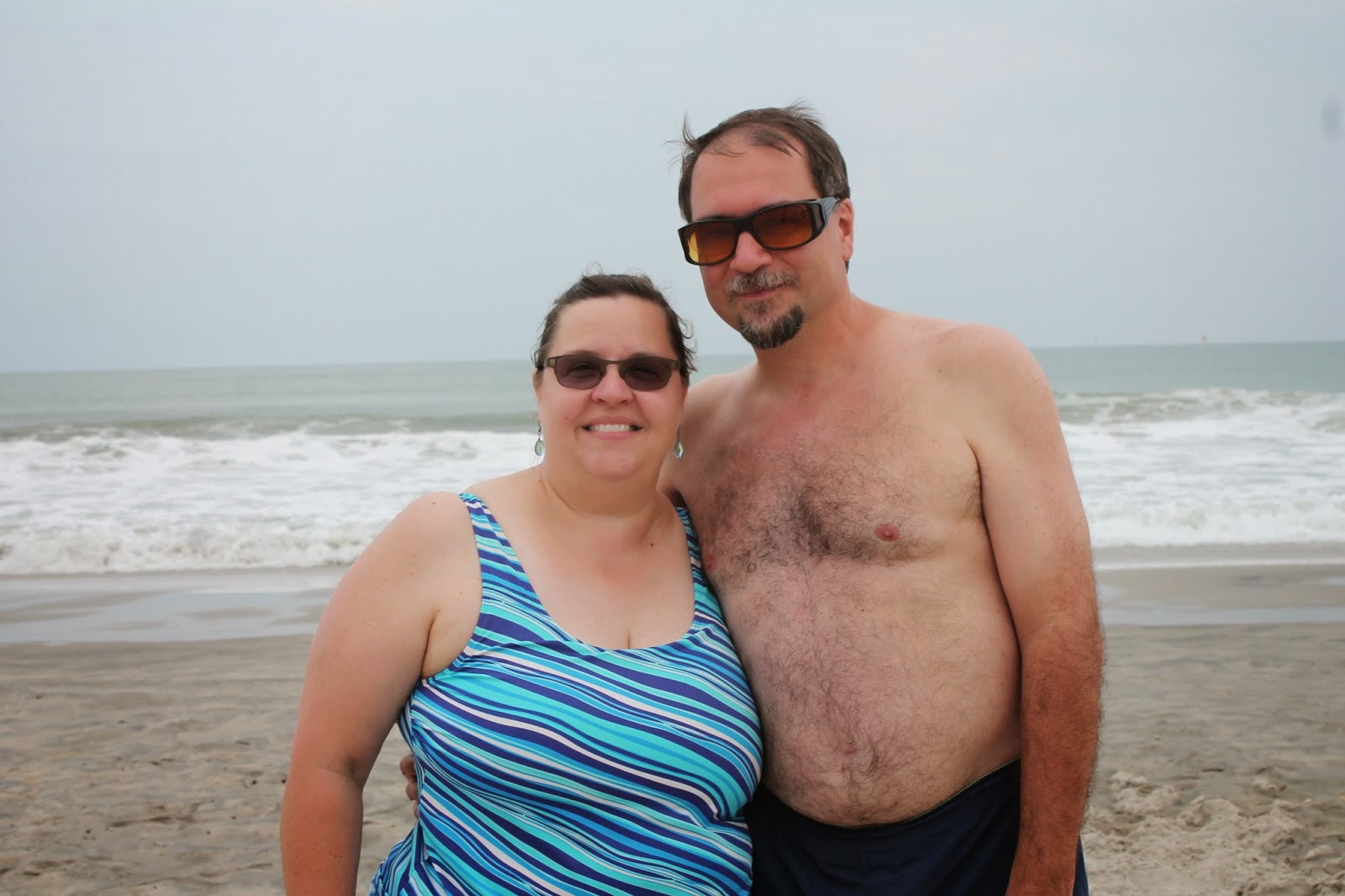 And we let the kids have at it.  They spent a glorious couple of days bouncing around in the waves. 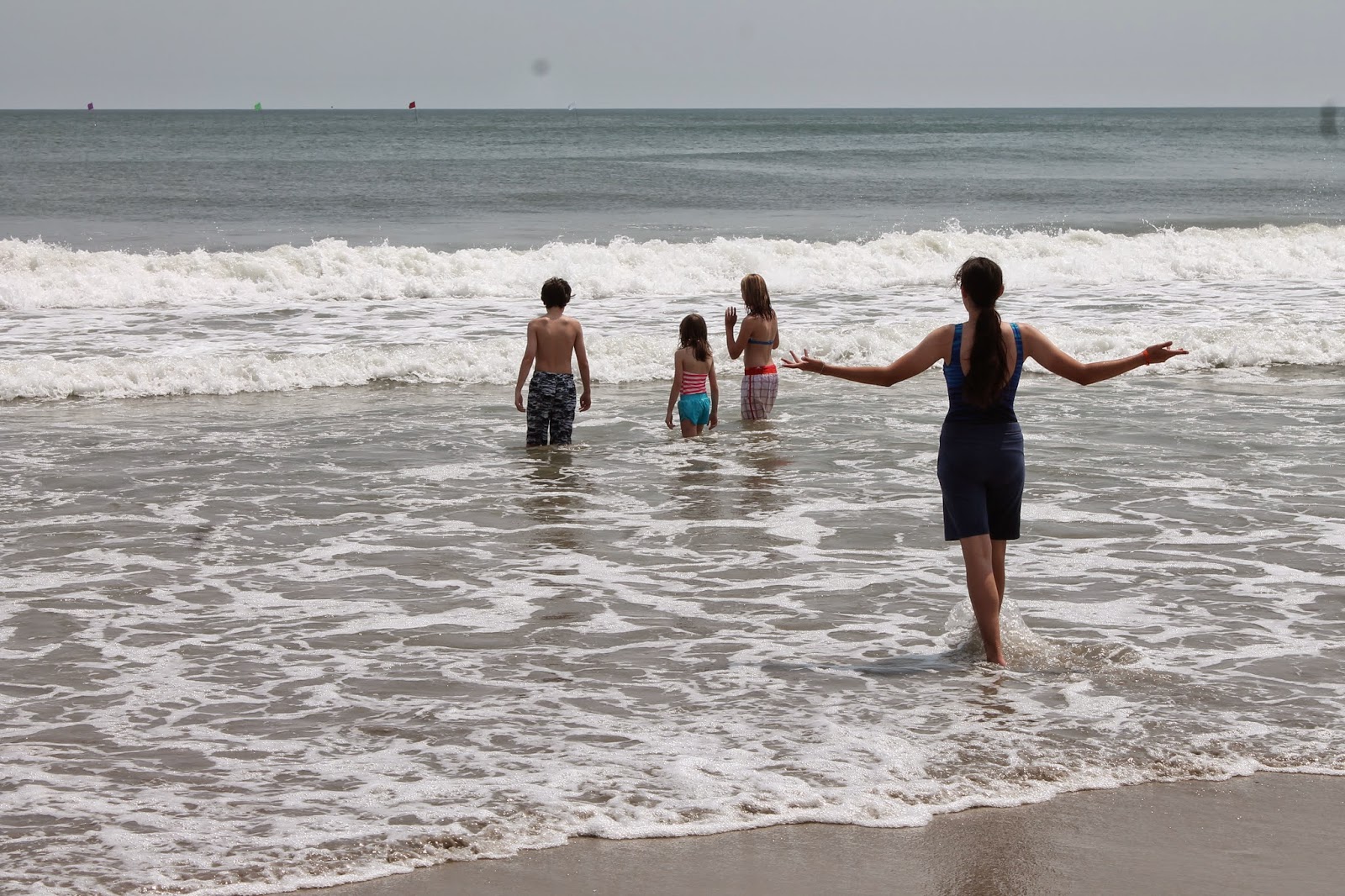 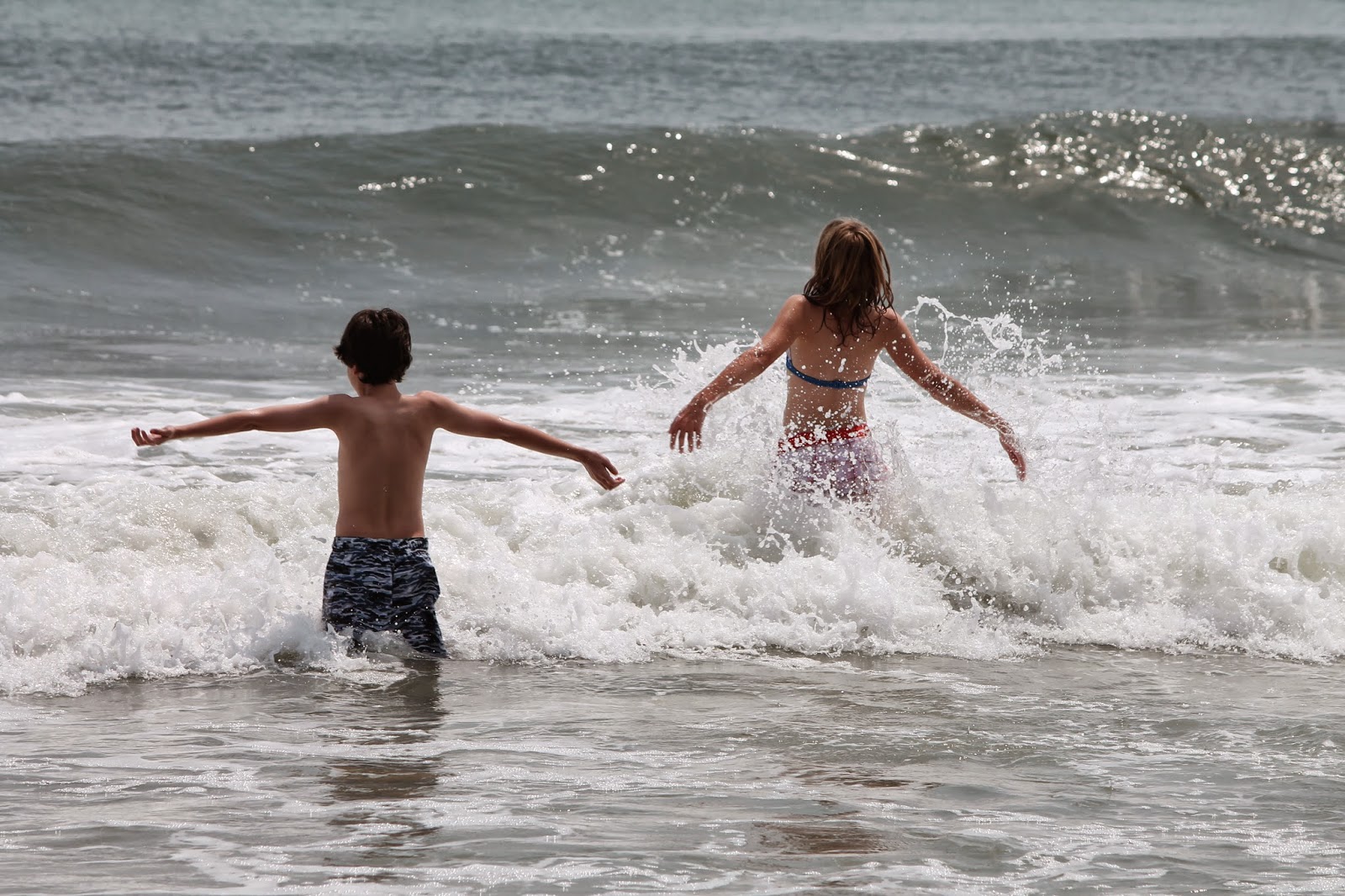 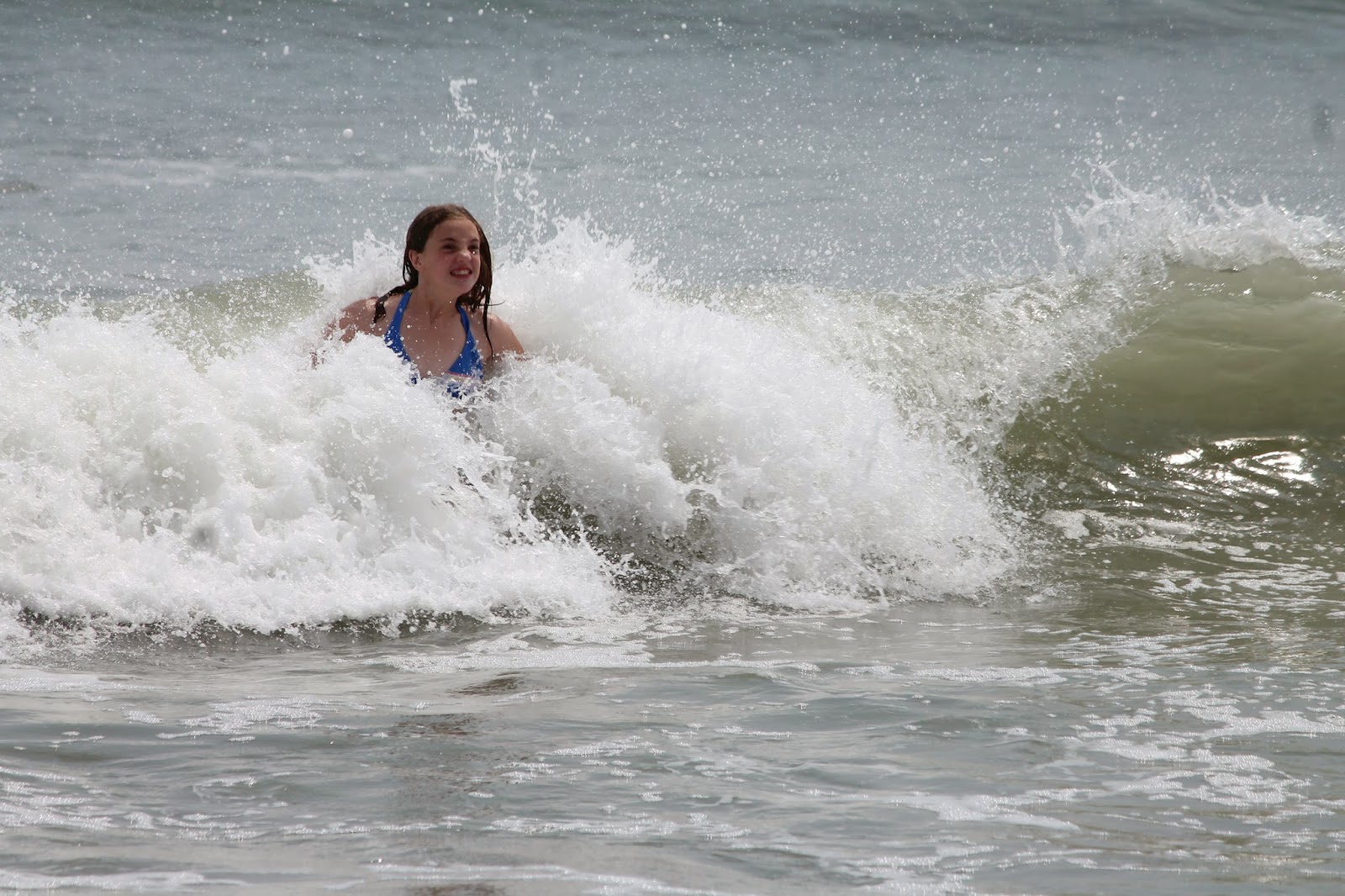 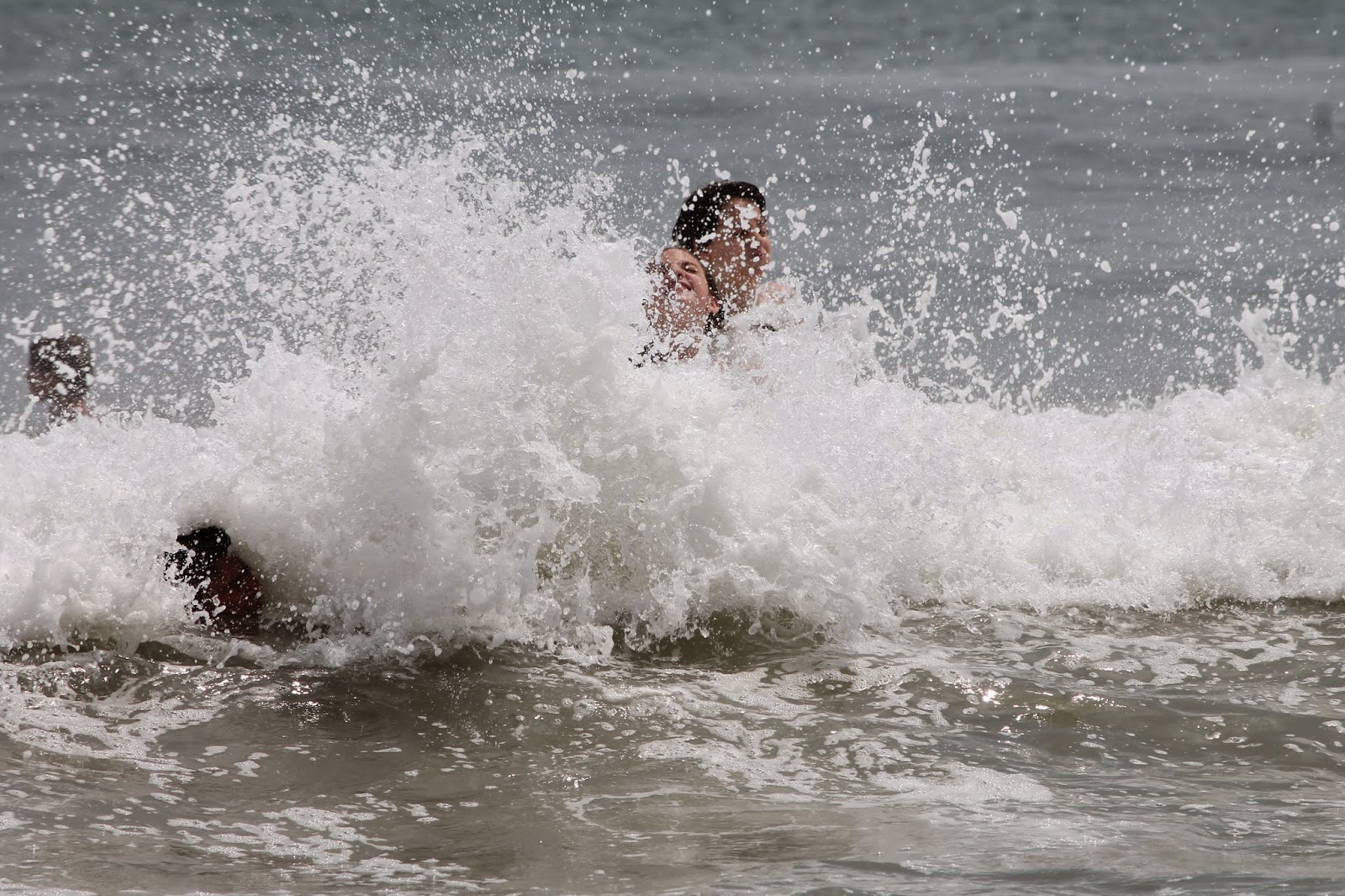 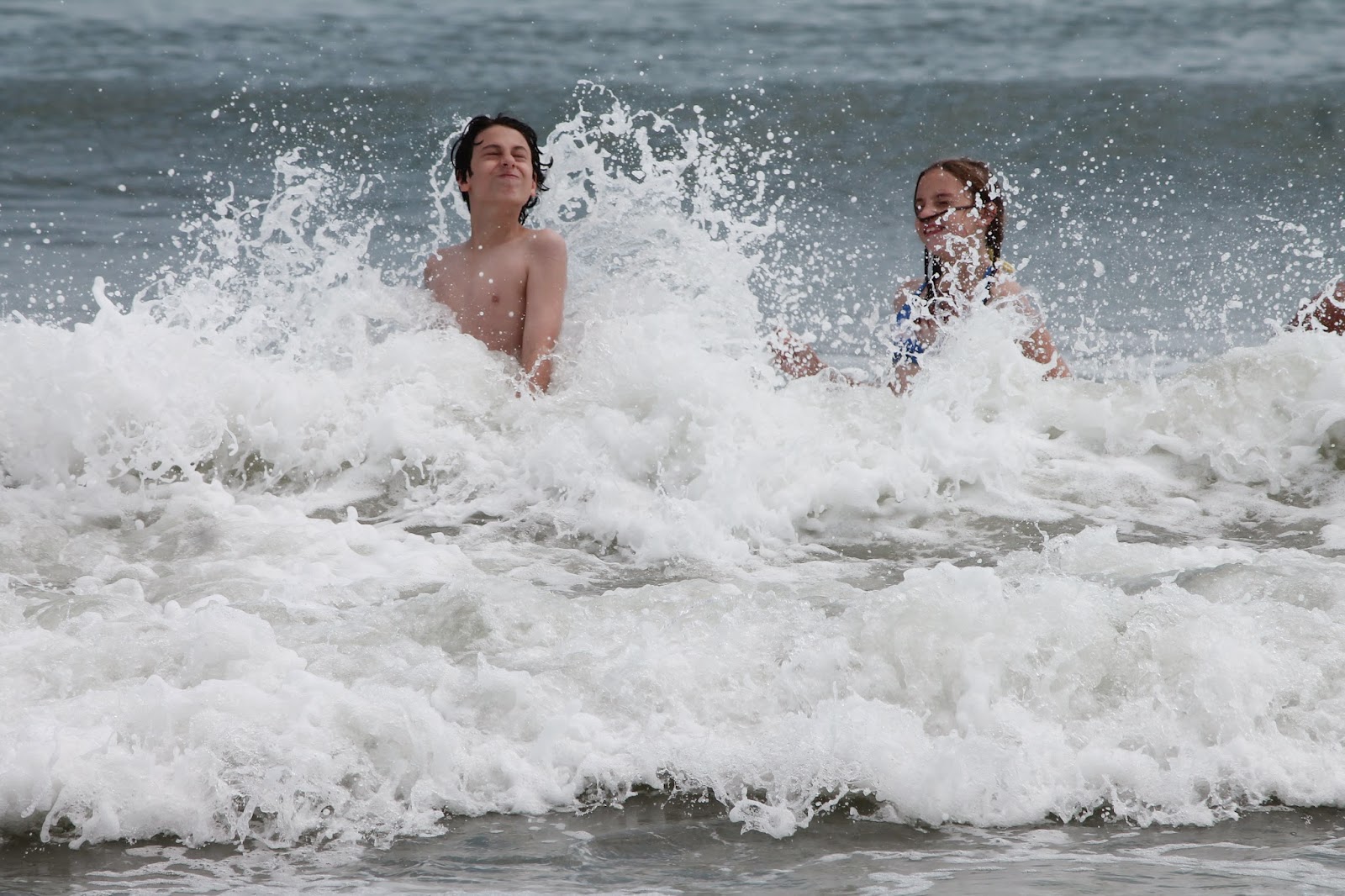 And riding the surf on their boogie boards. 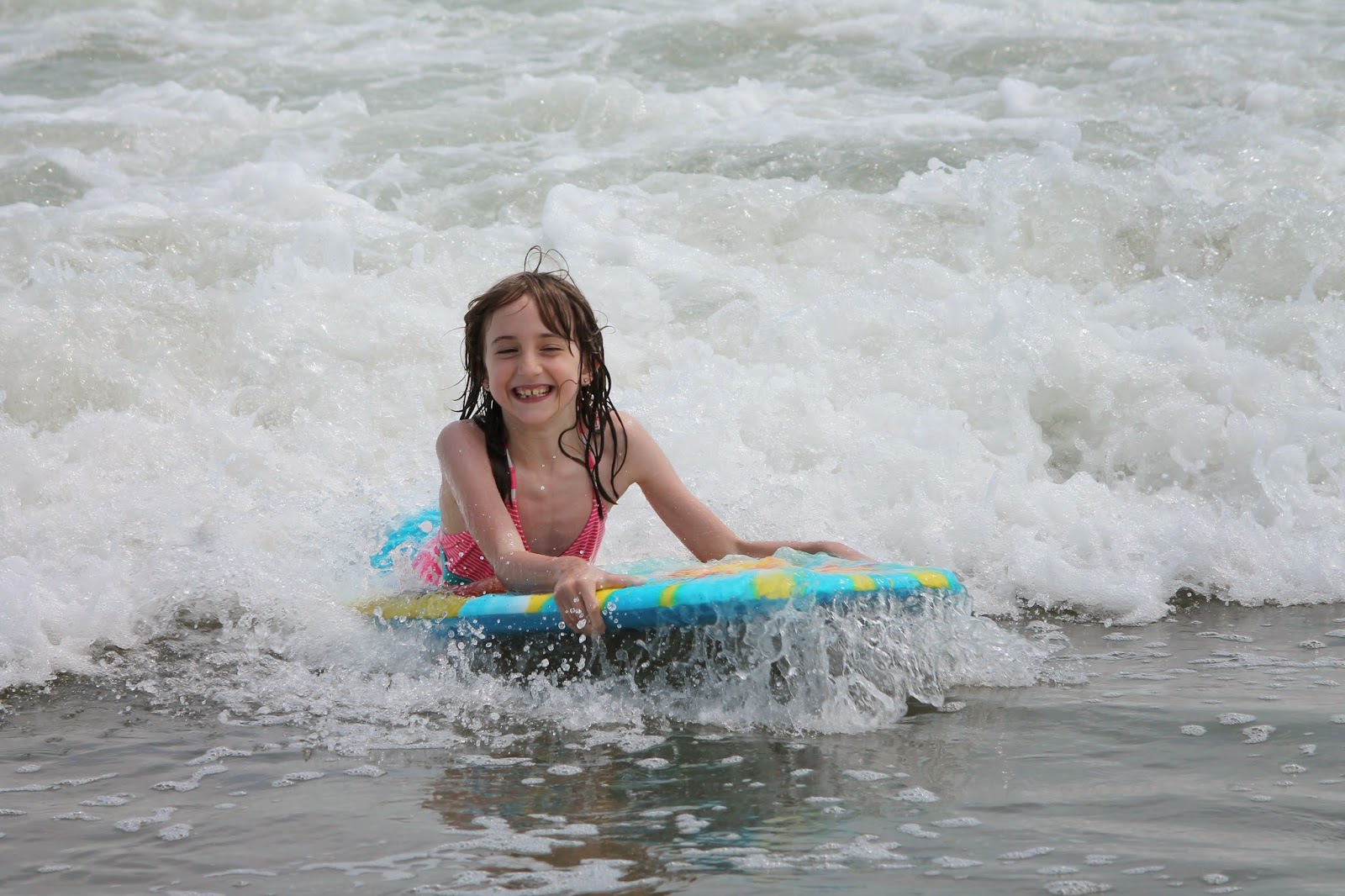 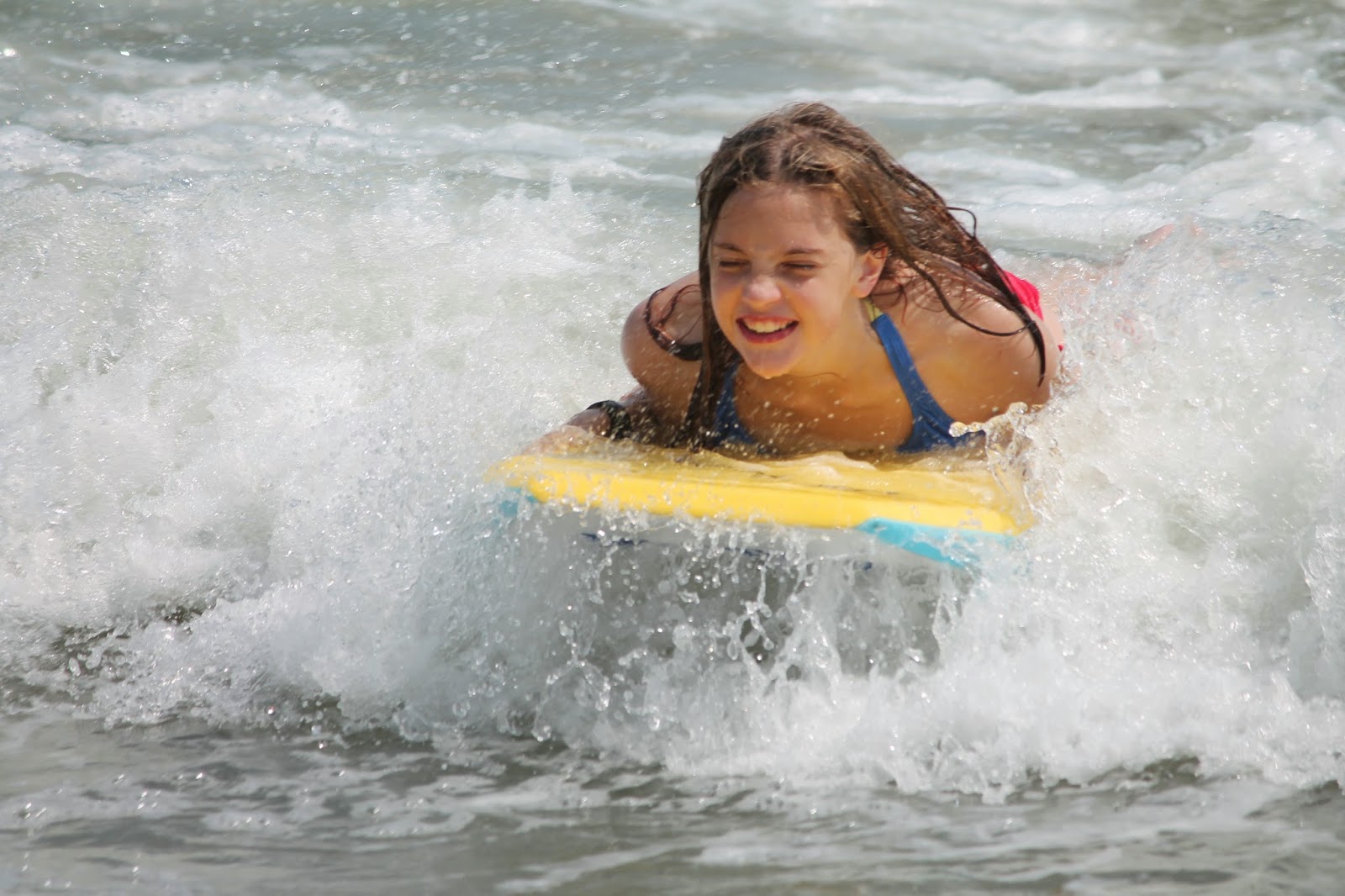 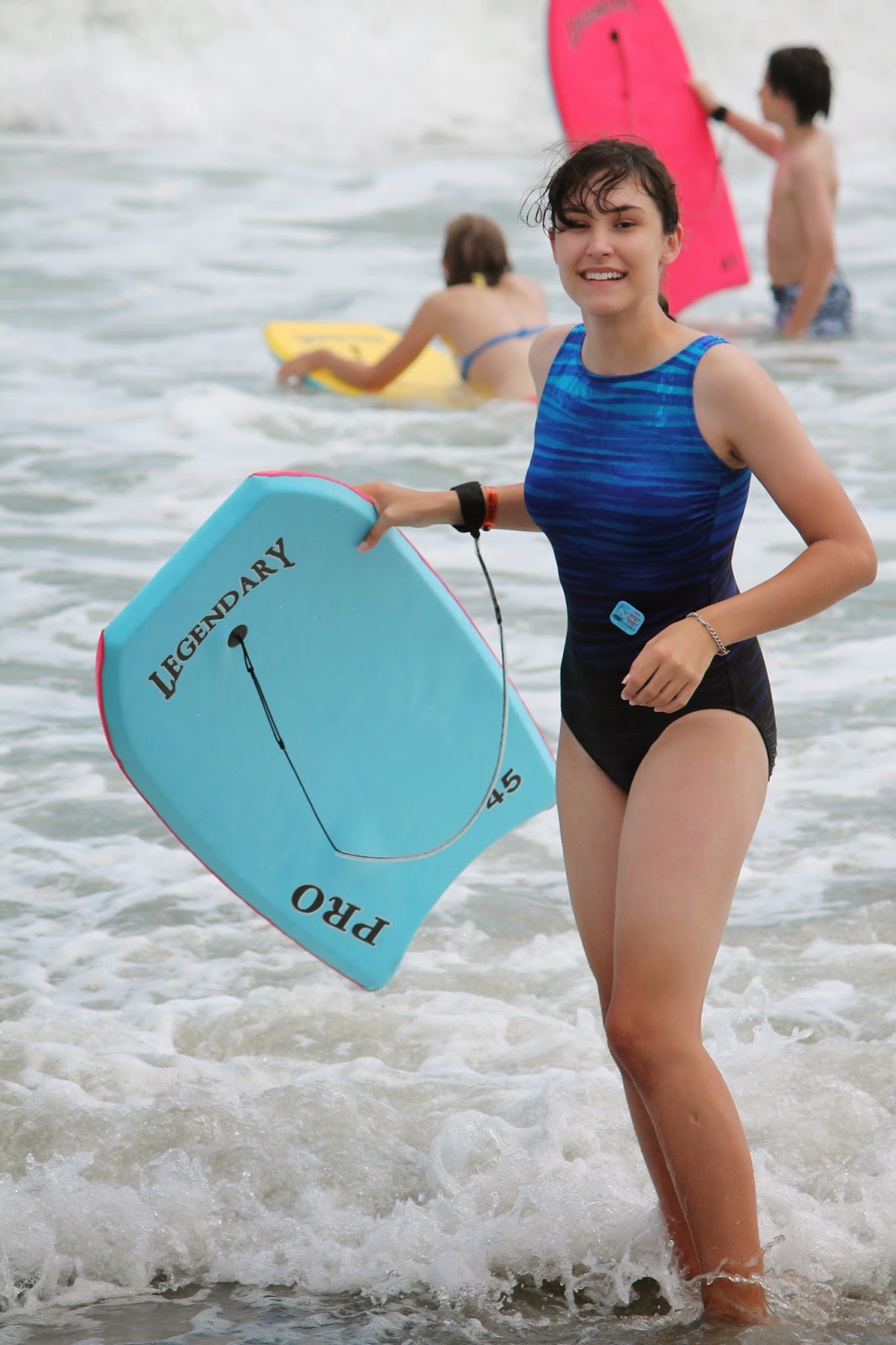 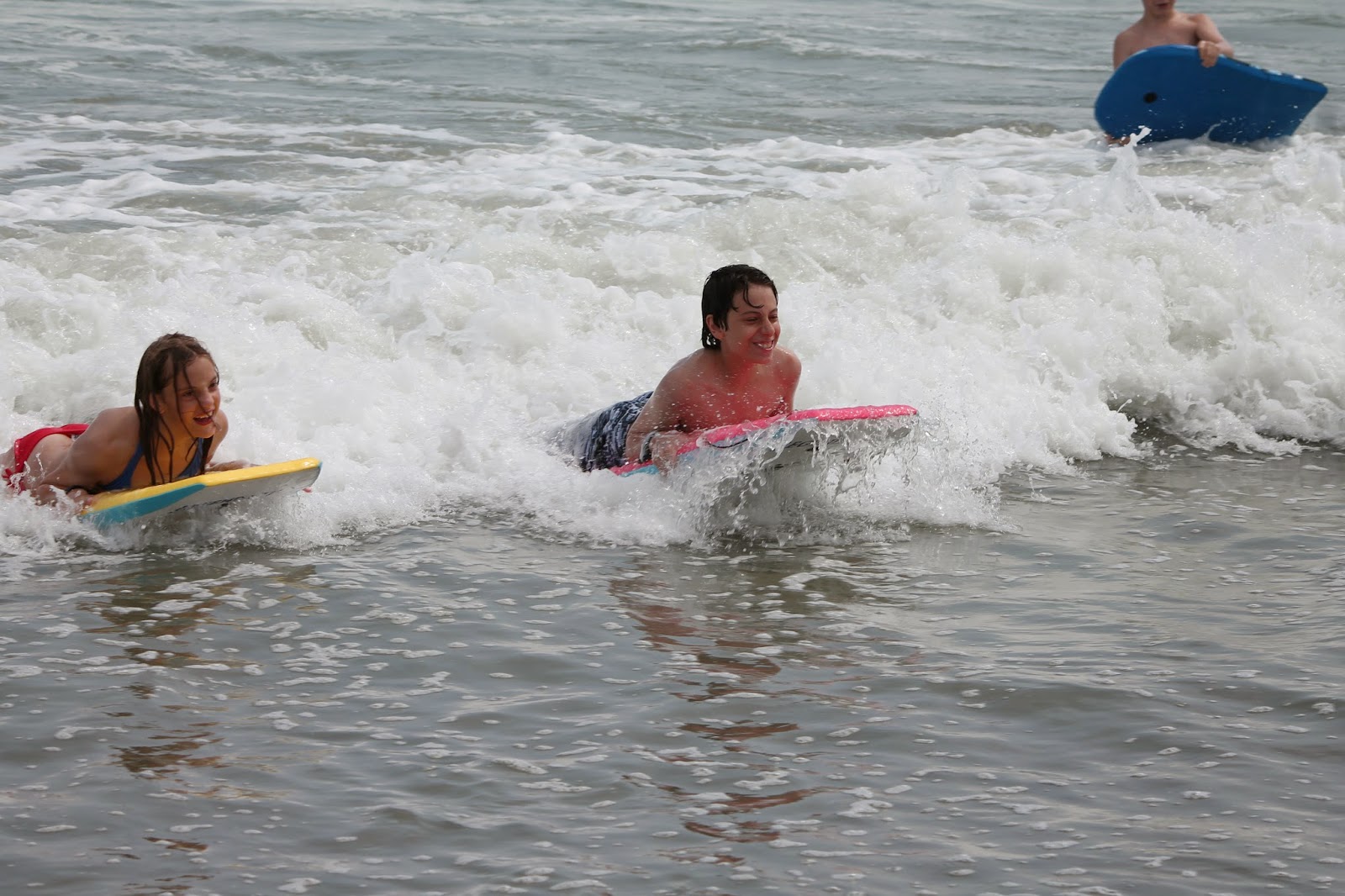 Eventually we’d start to wind down, so we’d pack up and go back to the house, where we’d hang out for a bit before contemplating dinner.  This did not involve any cooking on our part, because that sounded too much like work and work is not what vacations are for, so it essentially boiled down to where to go to eat.  It is a glorious thing in this economy to have the freedom to do that, and we took every advantage of it.

One night this meant heading over to the local hibachi place. 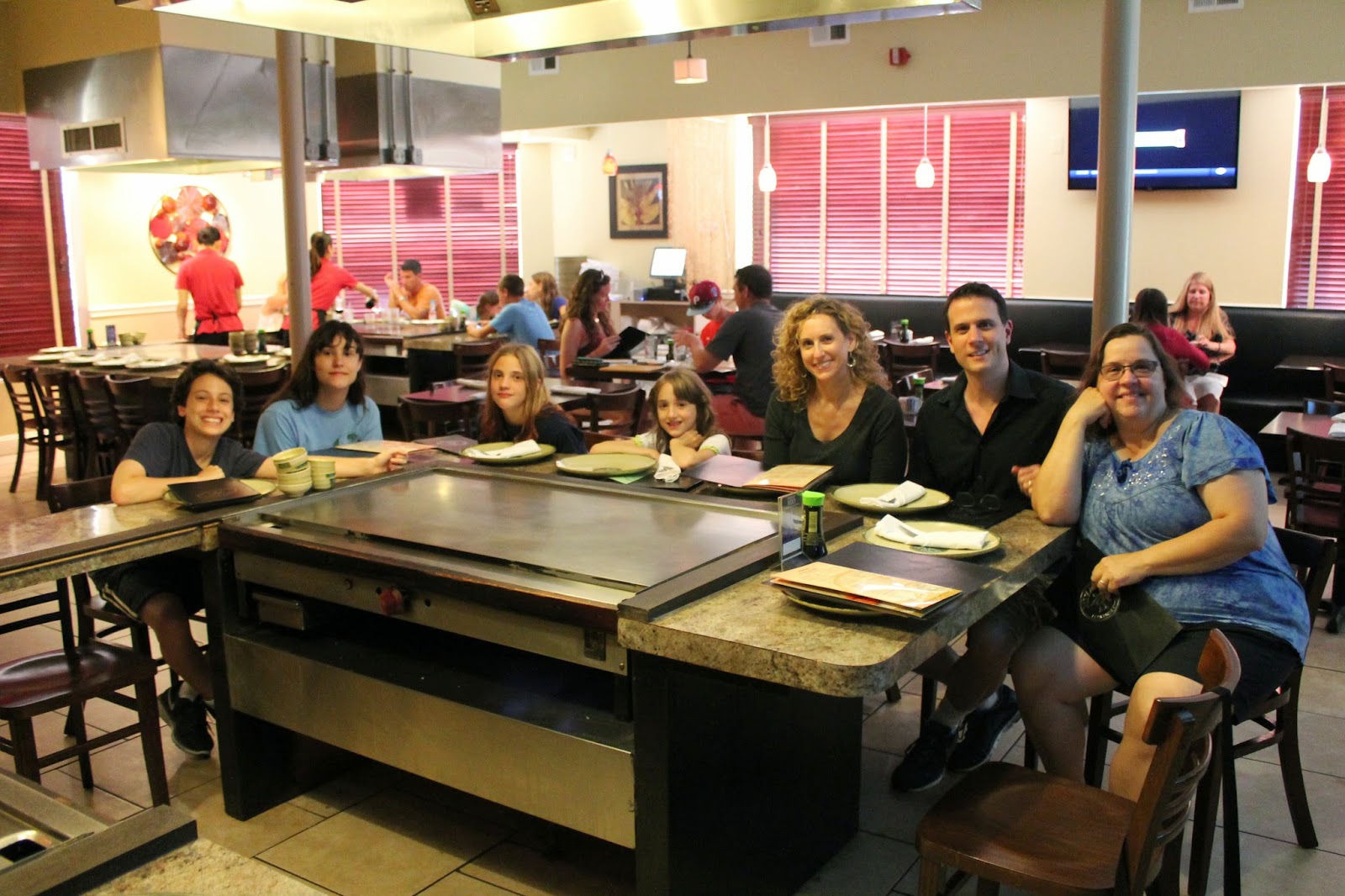 The other night we went to the boardwalk in Ocean City, one town south of Margate.  We strolled up and down for a bit before landing in a restaurant-rich alcove where we split up to forage before returning to a table somewhere.  Tabitha by this point was starting to miss the delicacies of Wisconsin (“Do you think there is any chance of finding fried cheese curds here?”  “Uh, no.”) but we all ended up with something tasty and only moderately lethal, after which we moved on.  Tabitha and Kim went off on their own in search of aloe, and the rest of us headed to the amusement park at the north end of the boardwalk.  Josh, Sara, and Lauren had a good time with the rides while Keith, Lori, and I looked on.  The log flume was the best. 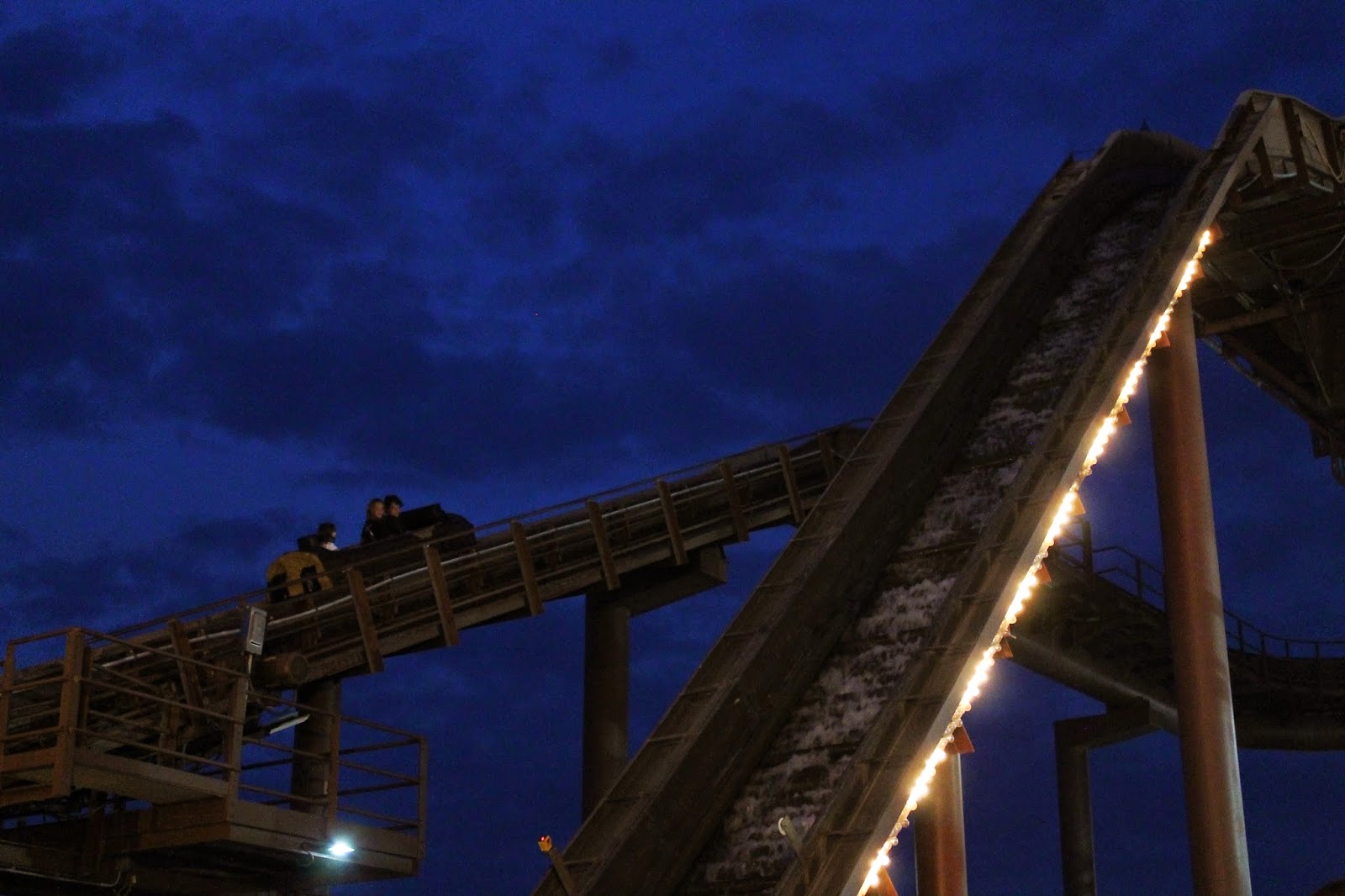 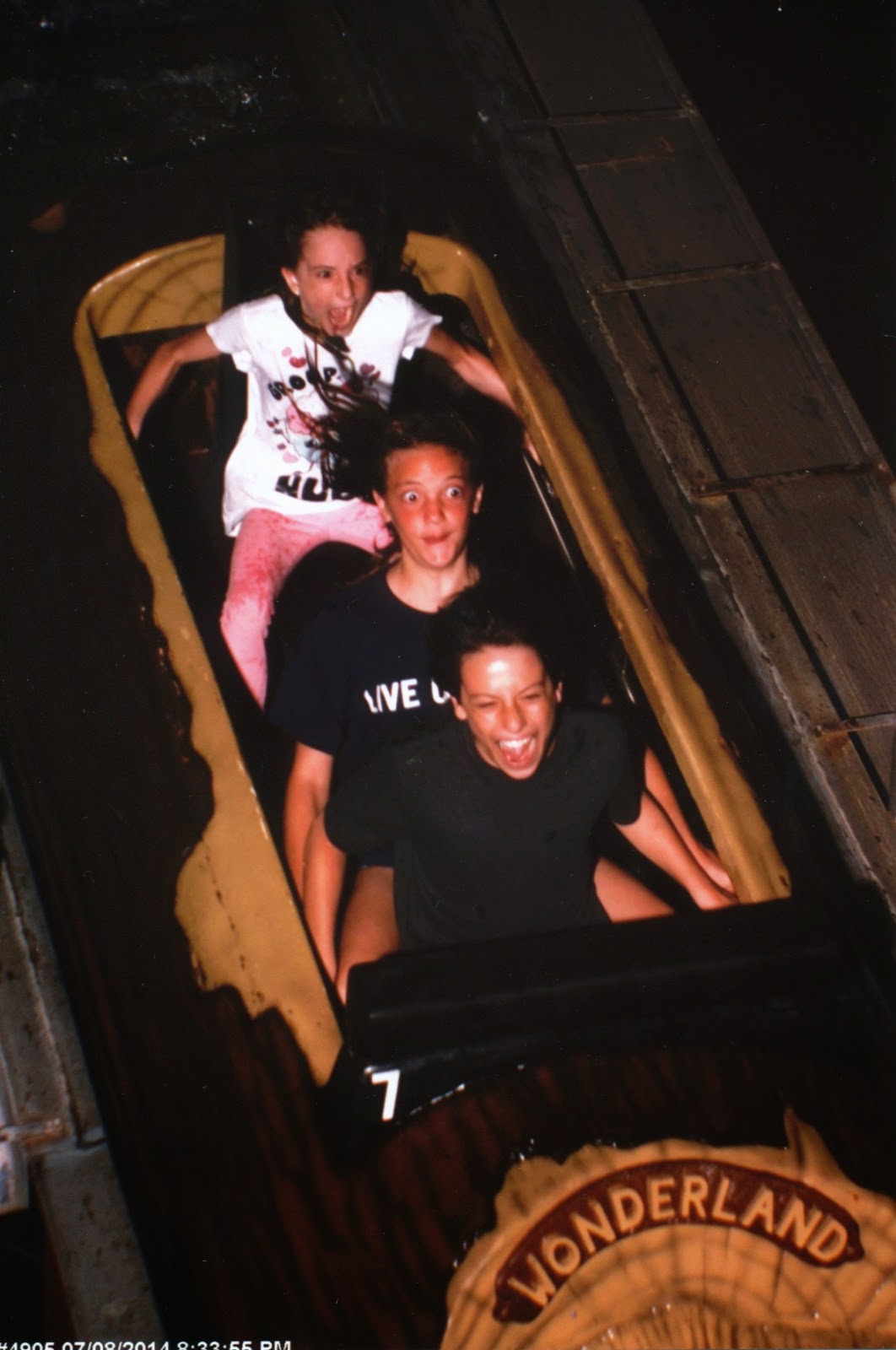 We even managed to meet up with our friends Mike, Krista and Eli, who were vacationing there at the same time.  It was a brief get-together, being rather late in the day, but we made plans to have breakfast with them on our way through Pittsburgh a couple of days later, and a fine and leisurely breakfast we had then. 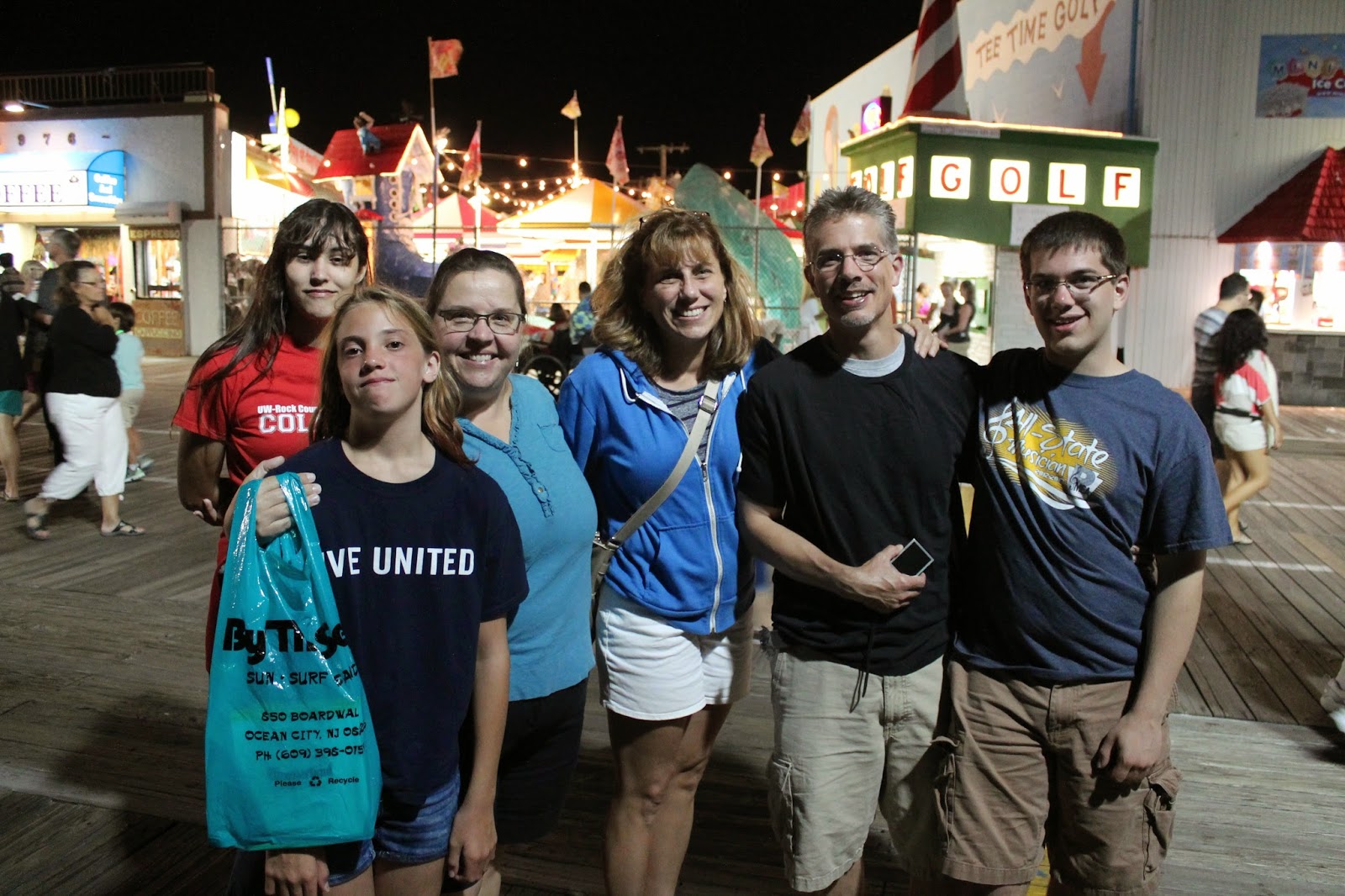 We also spent a fair amount of time in the evenings sitting on the deck in back of the house, right on the bay, just hanging out.  You can see why. 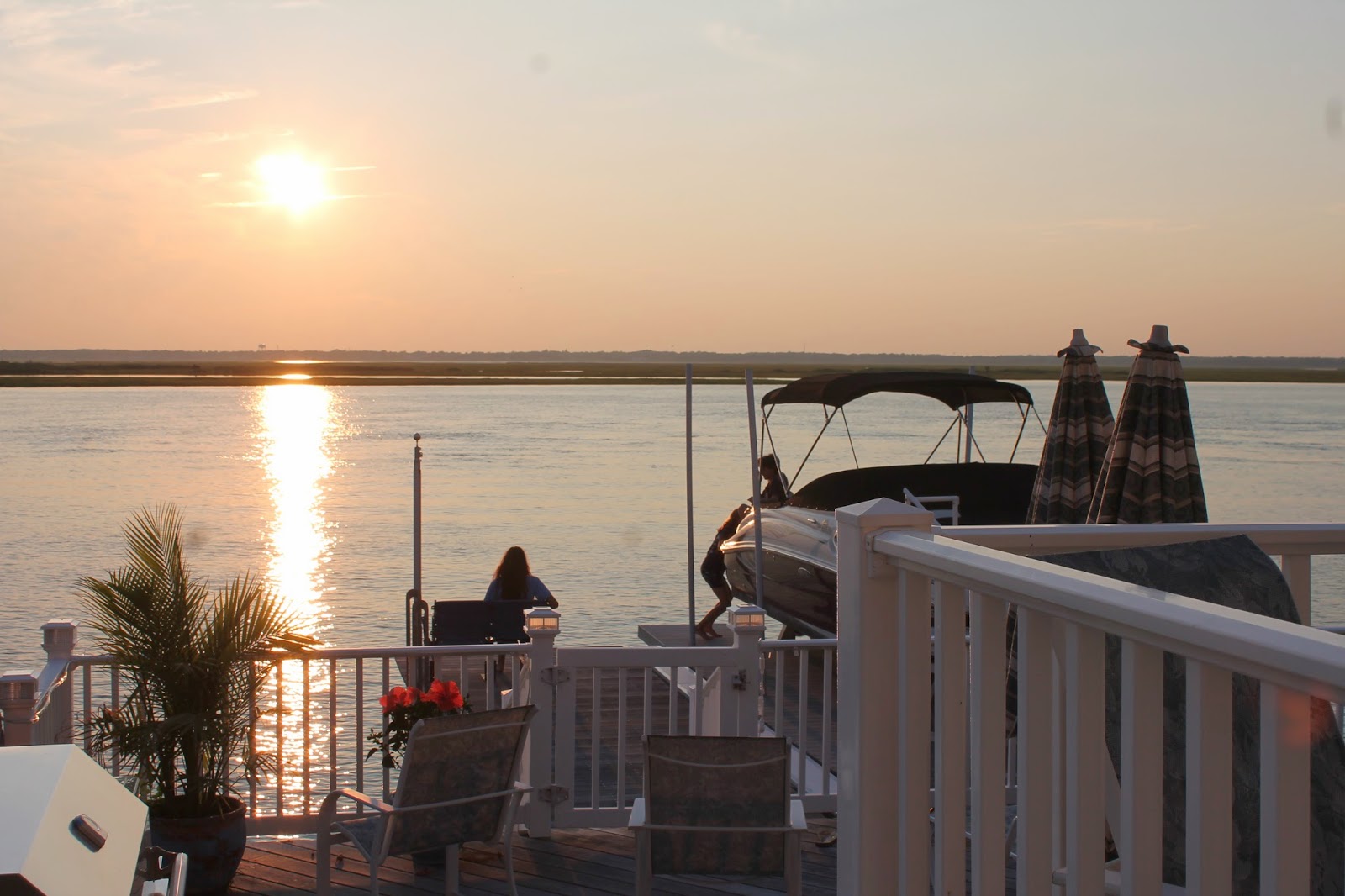 Breakfast one morning was at Junior’s, which is the world’s best donut shop and completely peanut-safe and nut-safe to boot.  That’s a rare combination. 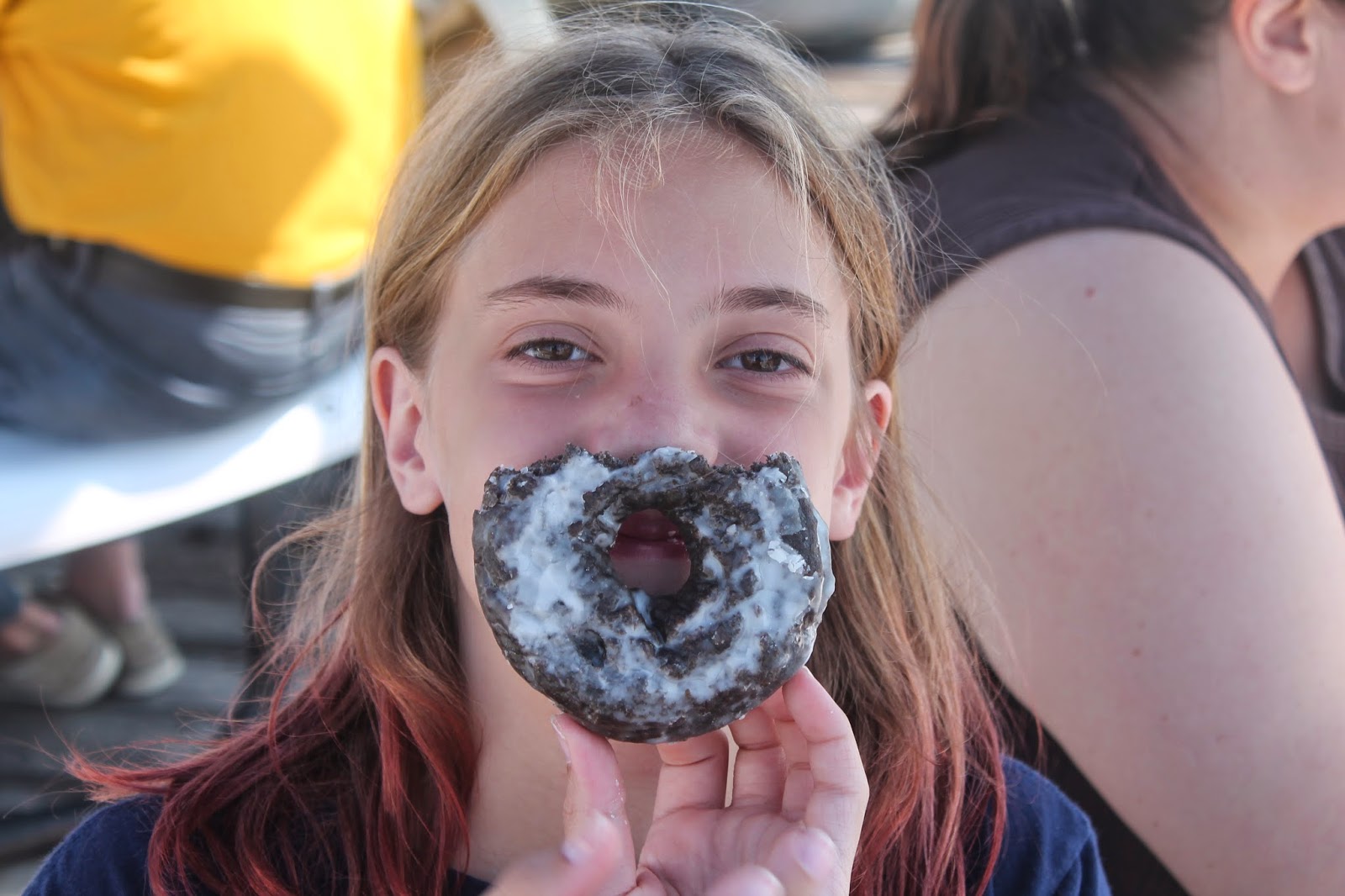 On the last day of our stay there, many of the group decided to go kayaking on the bay.  There being a kayak rental place a mere five minute walk away, this did not seem like a difficult thing to accomplish, and so we figured out who wanted to go (Kim, Tabitha, Lauren, Sara, Keith) and who was content to stay on the shore and wave (me, Lori, Josh), and headed on over. 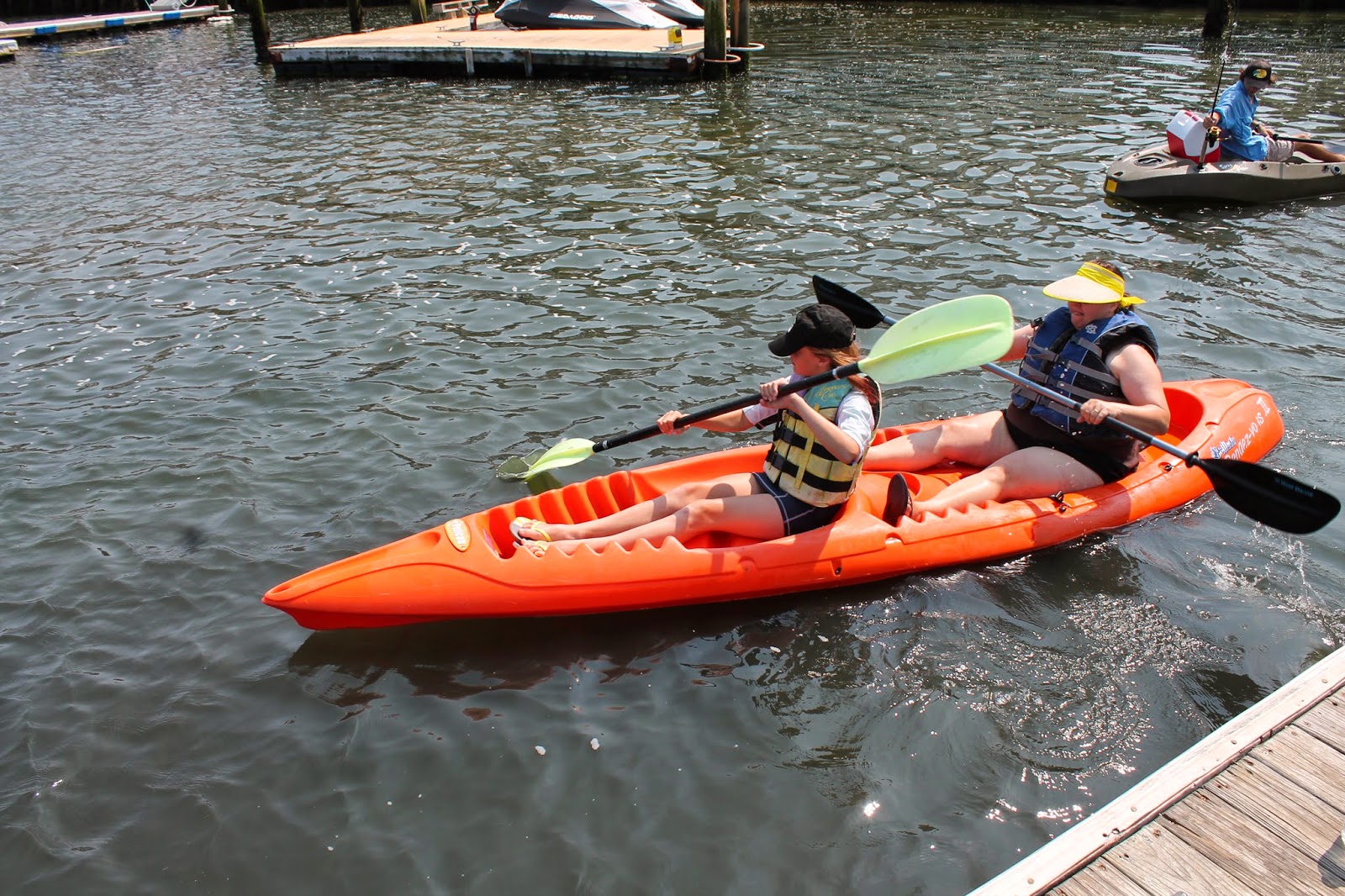 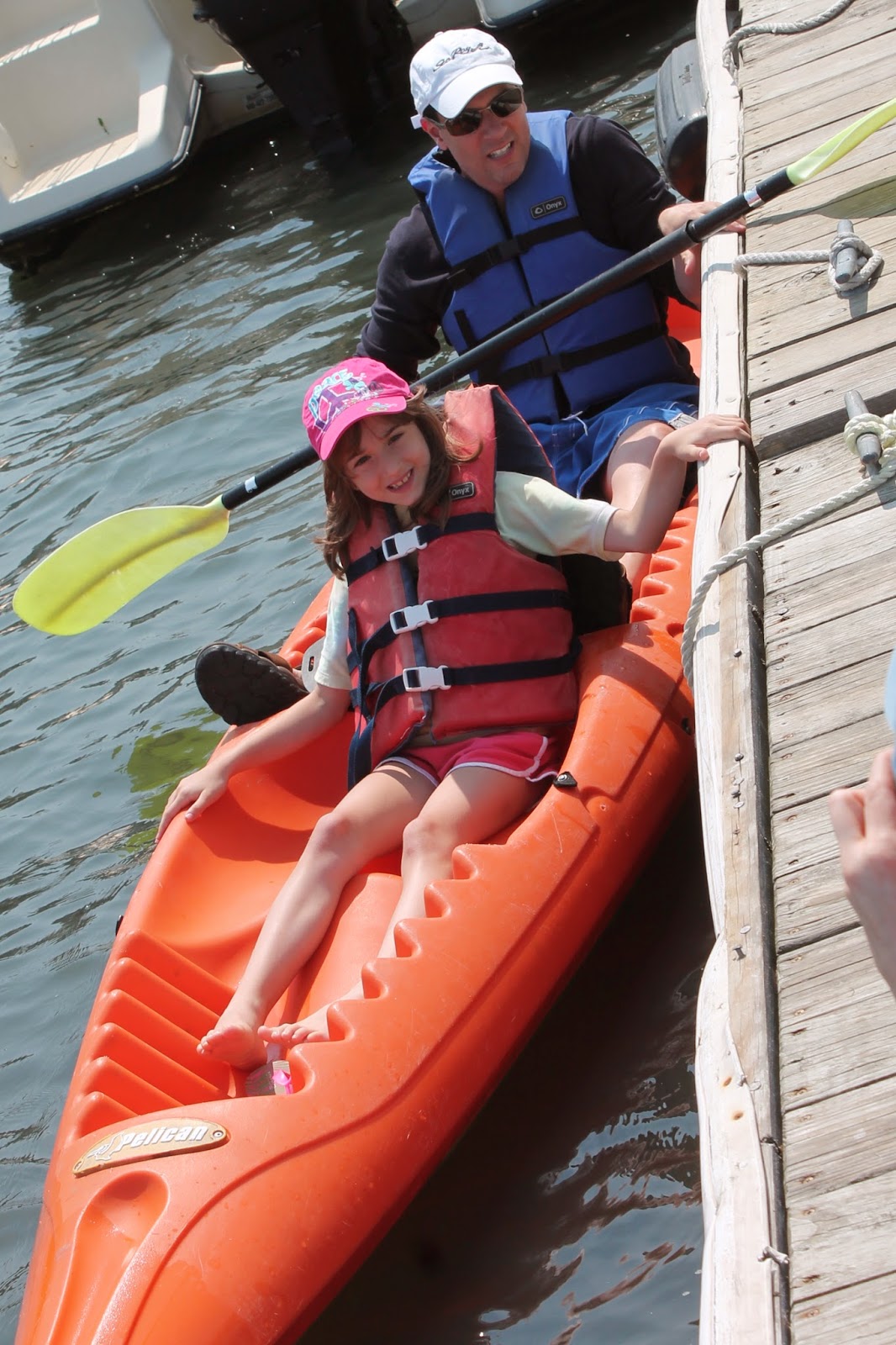 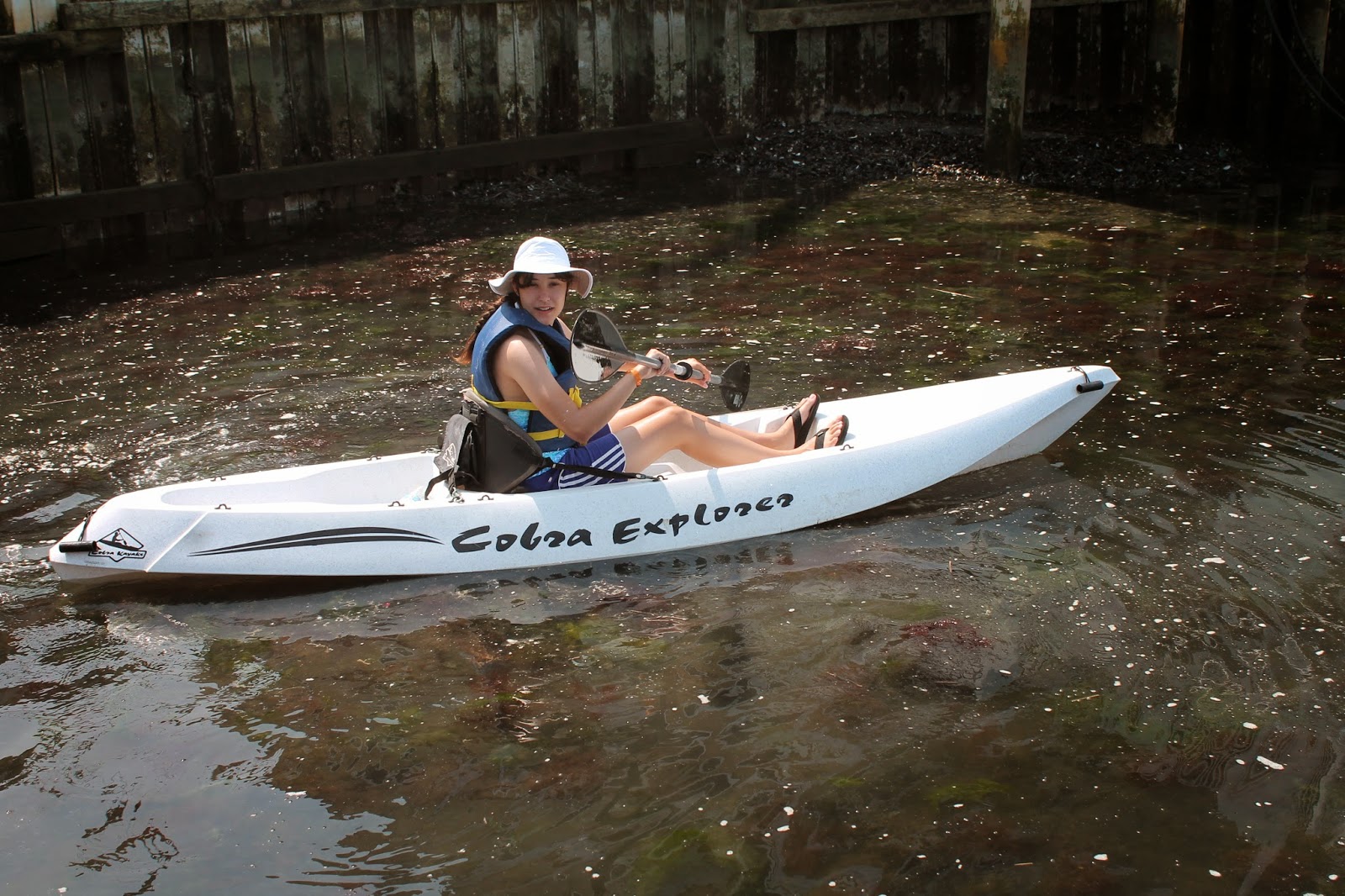 And then, well.  Difficulties were encountered, shall we say.  You know it’s low tide when you have to get out and push.  It's mostly mudflats out there, from the reports of those who had to slog their way across them, and when you put your foot down you're likely to sink in a bit.  It's kind of like being Godzilla, rampaging across all the delicately constructed homes of various tiny sea creatures. 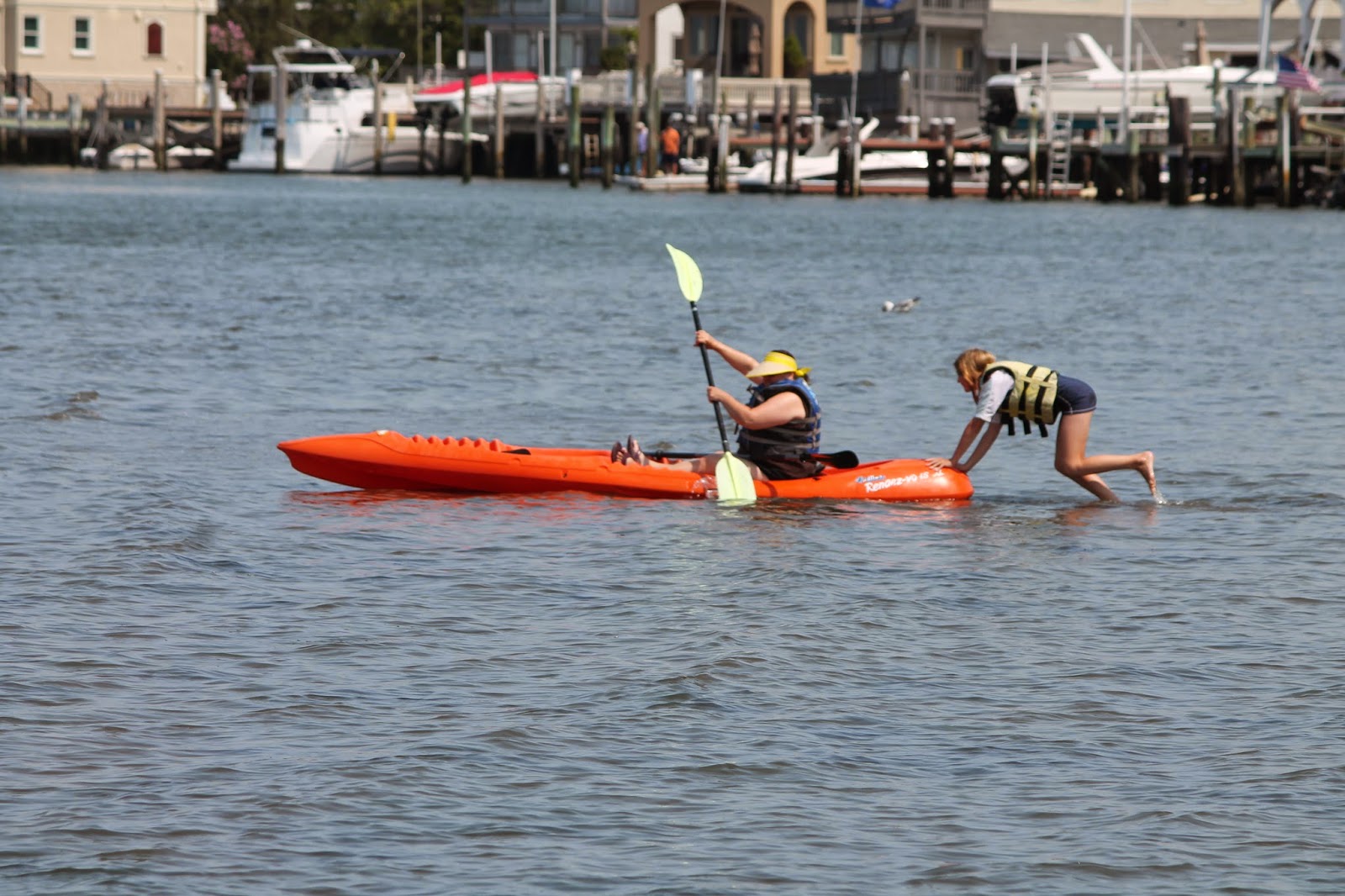 But eventually things were righted, and off they went. 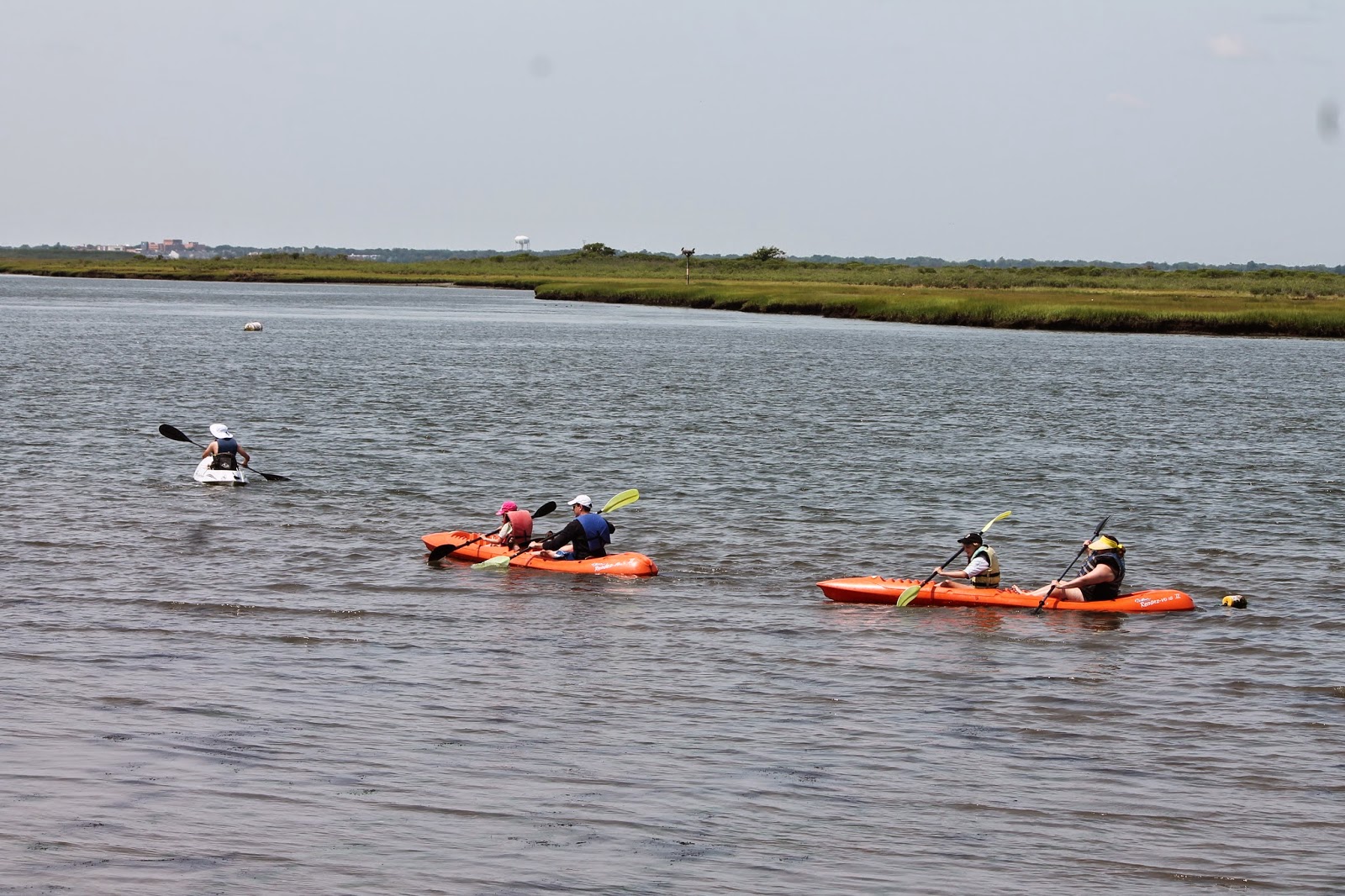 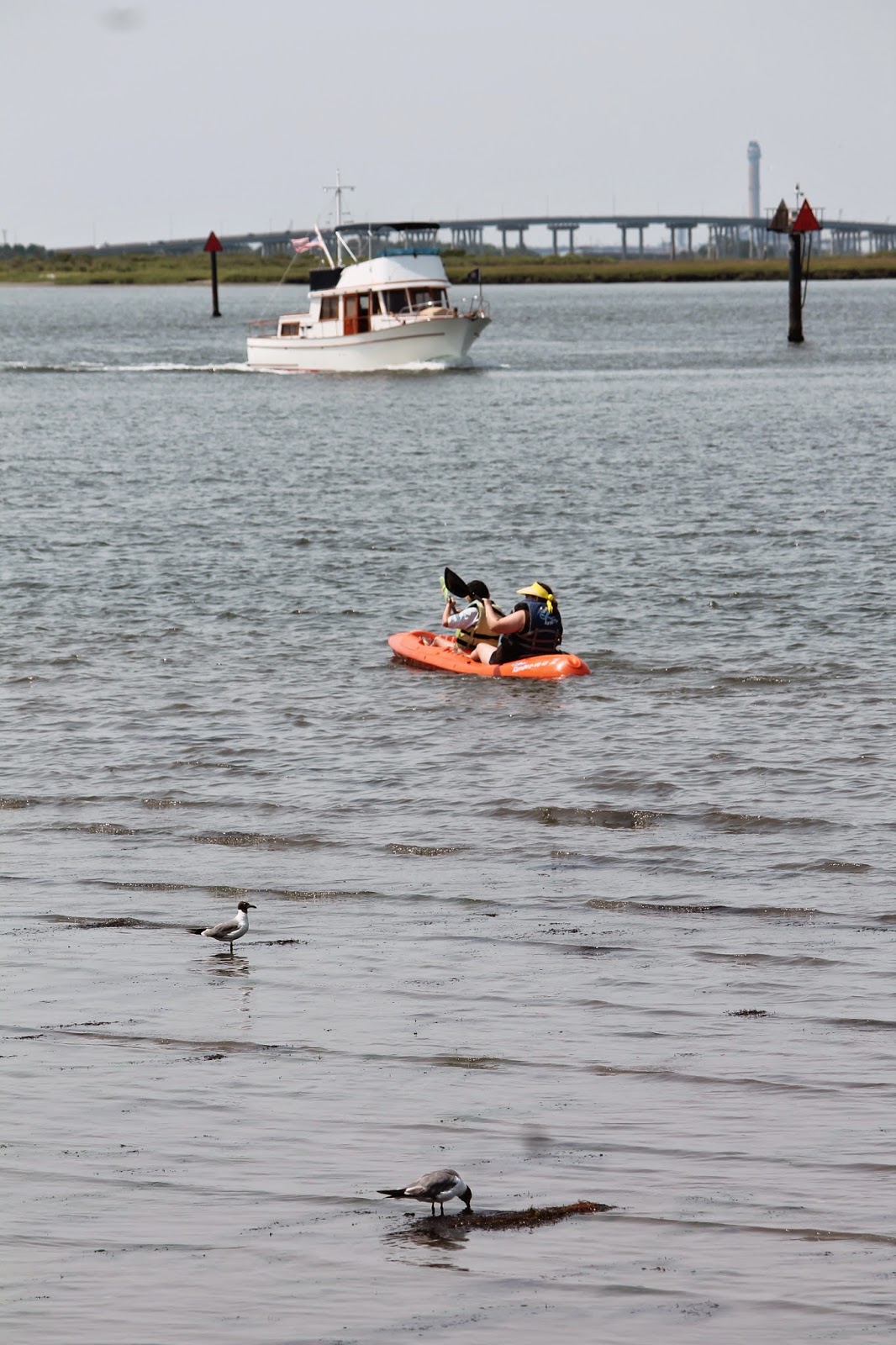 Then they got back, and the whole low-tide thing came into play once more. 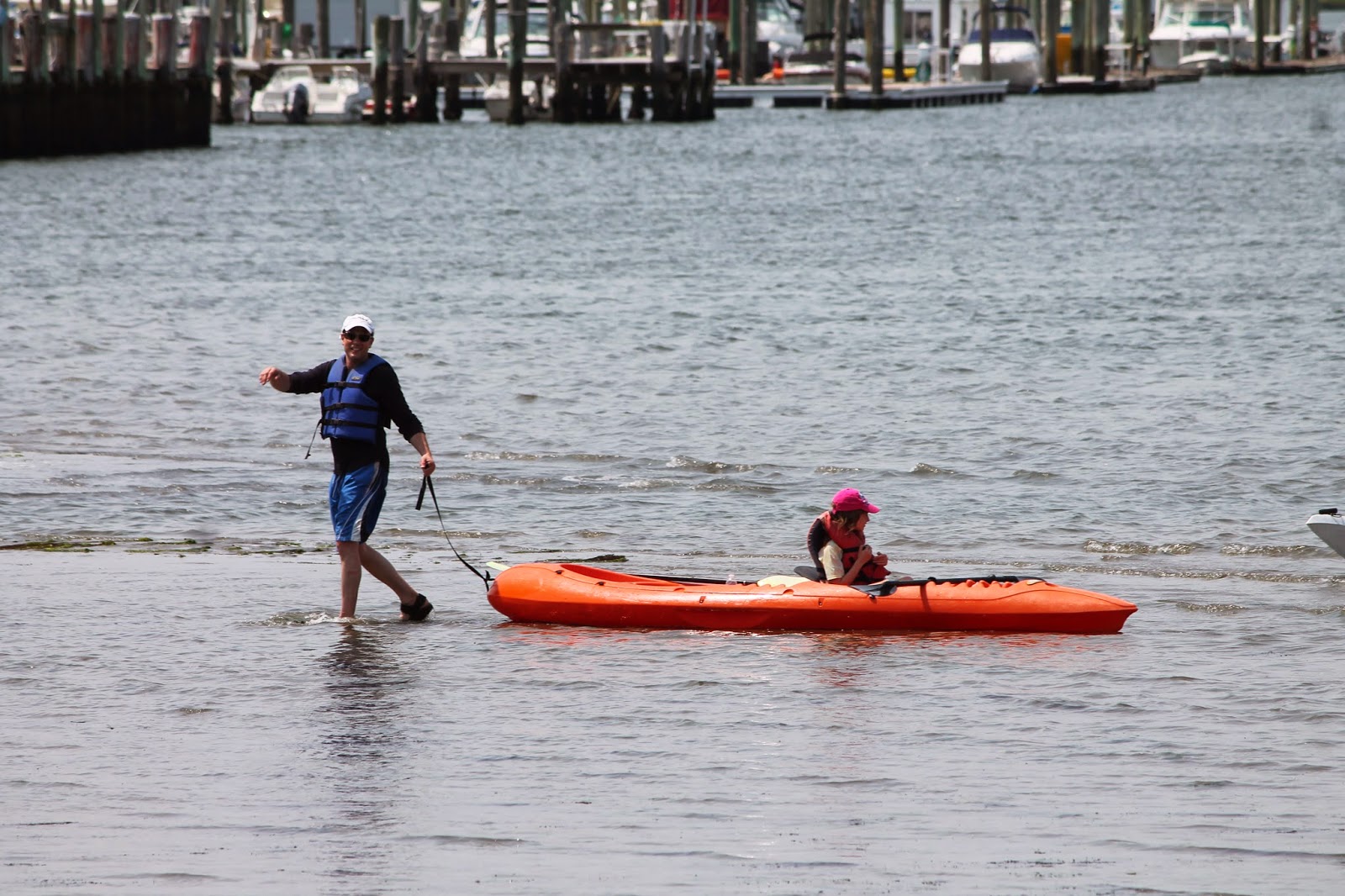 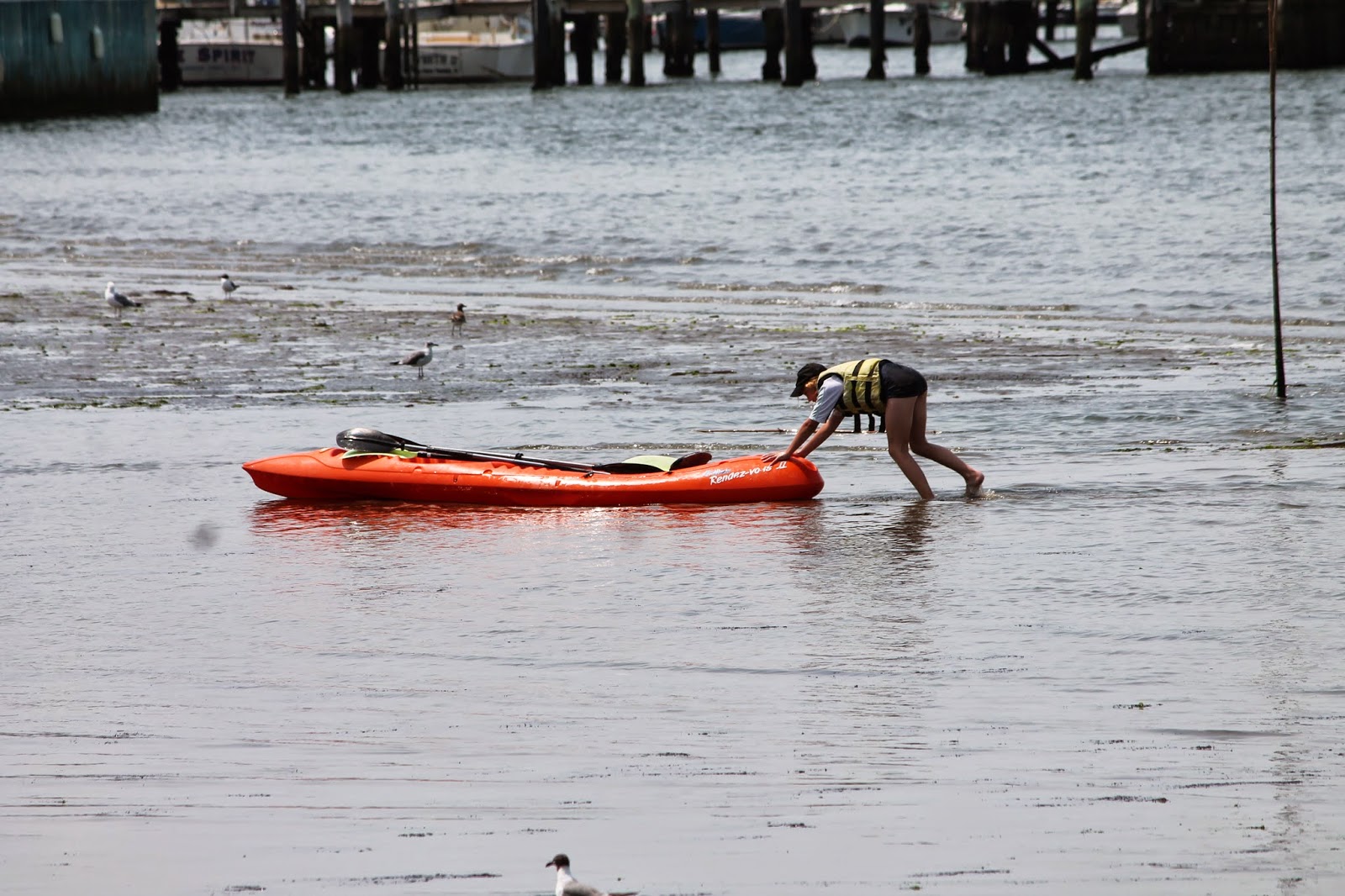 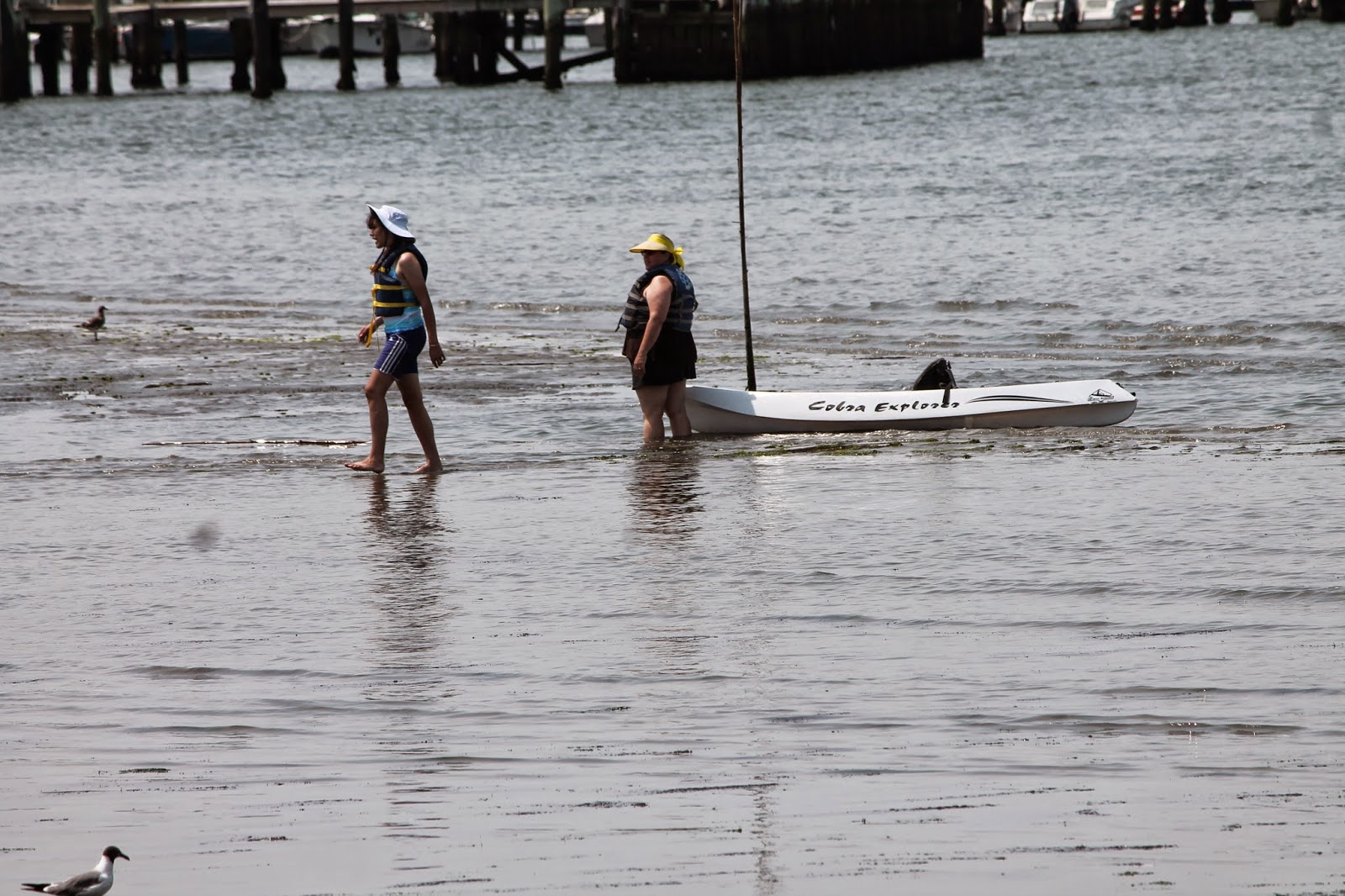 Apparently they had a very nice time out there on the water, low tide issues notwithstanding, and good for them.  I had a lovely time back on the deck with a good book and a bucket of cold grapes, myself.  That is the thing about the beach – it is big enough to encompass all sorts of vacations.

It was a good and happy time.  Thanks again, Rolane and Steve! 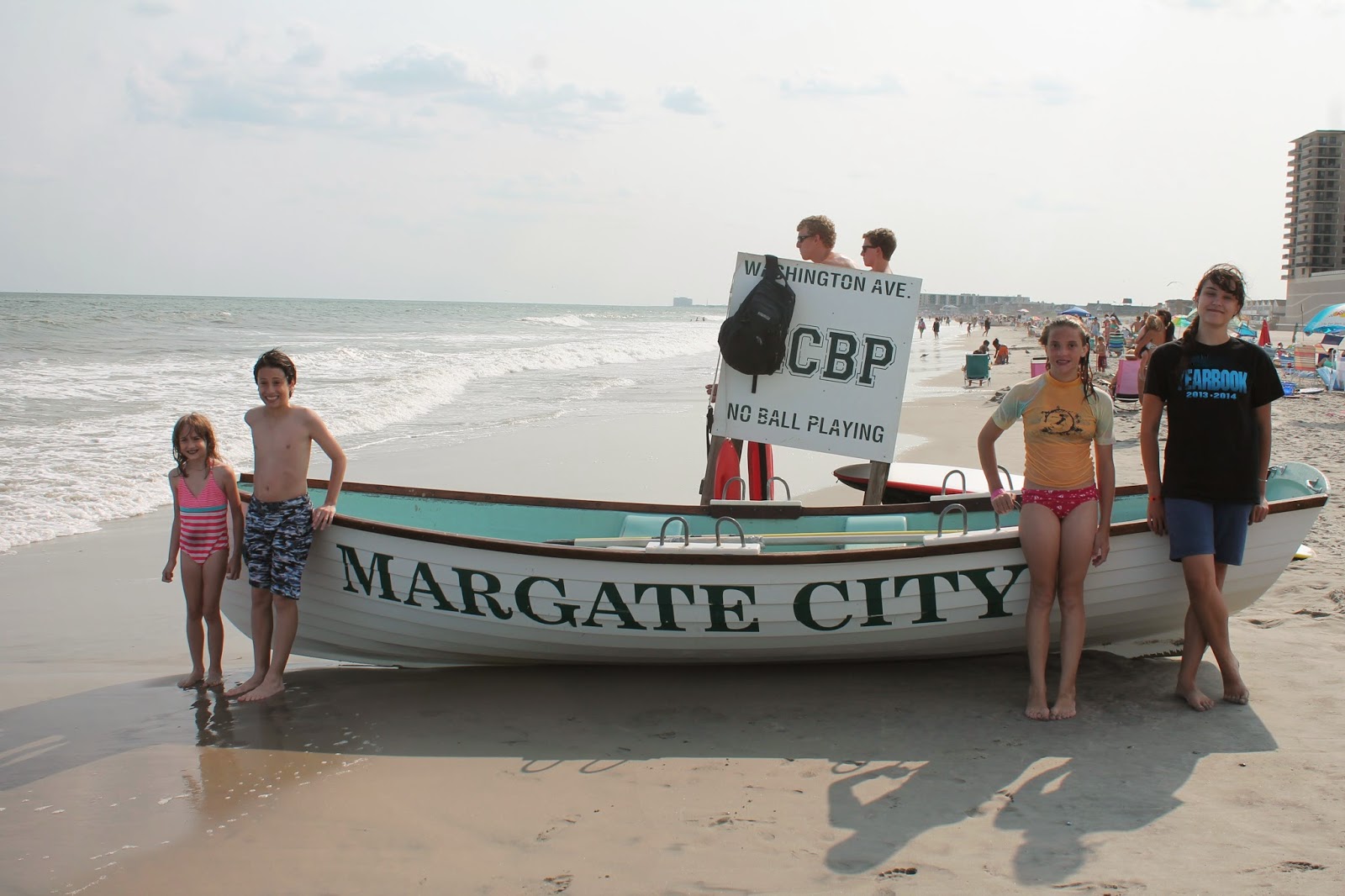 My husband-the-Midwesterner does not enjoy the beach or the ocean, so we do not spend our vacations there. I am officially jealous.

Your post was my childhood and adolescence. My grandparents originally summered in a tiny apartment on Iowa Ave in Atlantic City and we stayed at a local "hotel" -- The Ascot, which was still there and way more seedy as of a few years ago. The year I turned 13, my uncle bought a small house on the next to beach block on Lancaster Ave in Margate. We spent many summer vacations there. For a week, there would be 10 of us squished into a small 3 bedroom 2 bath bungalow. Most of the time was spent, as you note, getting sandy and dirty on the beach. We always walked down at least once to say hi to Lucy. When I was in college, my grandparents moved into a one bedroom apartment right next to Lucy (9300 block of Atlantic Ave, I think).

It's amazing how long those memories stick with us. My younger vacations were mostly in Sea Isle City, a few towns south, but very similar - a house owned by relatives, sand and waves and getting tired and happy. We've spent a few vacations going to Ocean City or Cape May and enjoyed them as well.

You can do a lot there without needing to get wet or sandy. Tell your husband to bring some good books and relax in the house while you and your daughter go to the beach. :)