The green one always wins.

If you’re going to Hersheypark and you want to go on the roller coaster that has the green one racing the red one along more or less parallel tracks, the green one always wins.  Of course, that only means that the red one has a ride that is just that much longer, so there is that.

On our way out east this summer we decided that it would be fun to go visit Hersheypark.  We’ve been to the Six Flags near Chicago, but this would be a new experience.  And it had chocolate.  You can’t beat a place that has both roller coasters and chocolate, even if they do insist that “Hersheypark” is all one word.

I hadn’t been to Hershey since I was roughly Tabitha’s age.  My parents took me and my brother there back in the late 1970s.  It was a great place.  The whole city smelled like chocolate, which was amazing for us tourists but probably got pretty old for the residents.  We hit the park with a vengeance, particularly the roller coasters – I even convinced my mother to go on the Comet, an old wooden coaster.  It was a moment of high drama and low comedy and the less said about it the better, probably.  My dad and I went on the Super Duper Looper, which was new then.  He wore his fishing cap, and it magically stayed on his head the entire ride.  My mother, watching from the safety of the ground below, was convinced that he had thumbtacked it to his head.

We also won a giant Tweety Bird at some arcade game.  It finally dissolved about a year or two ago. 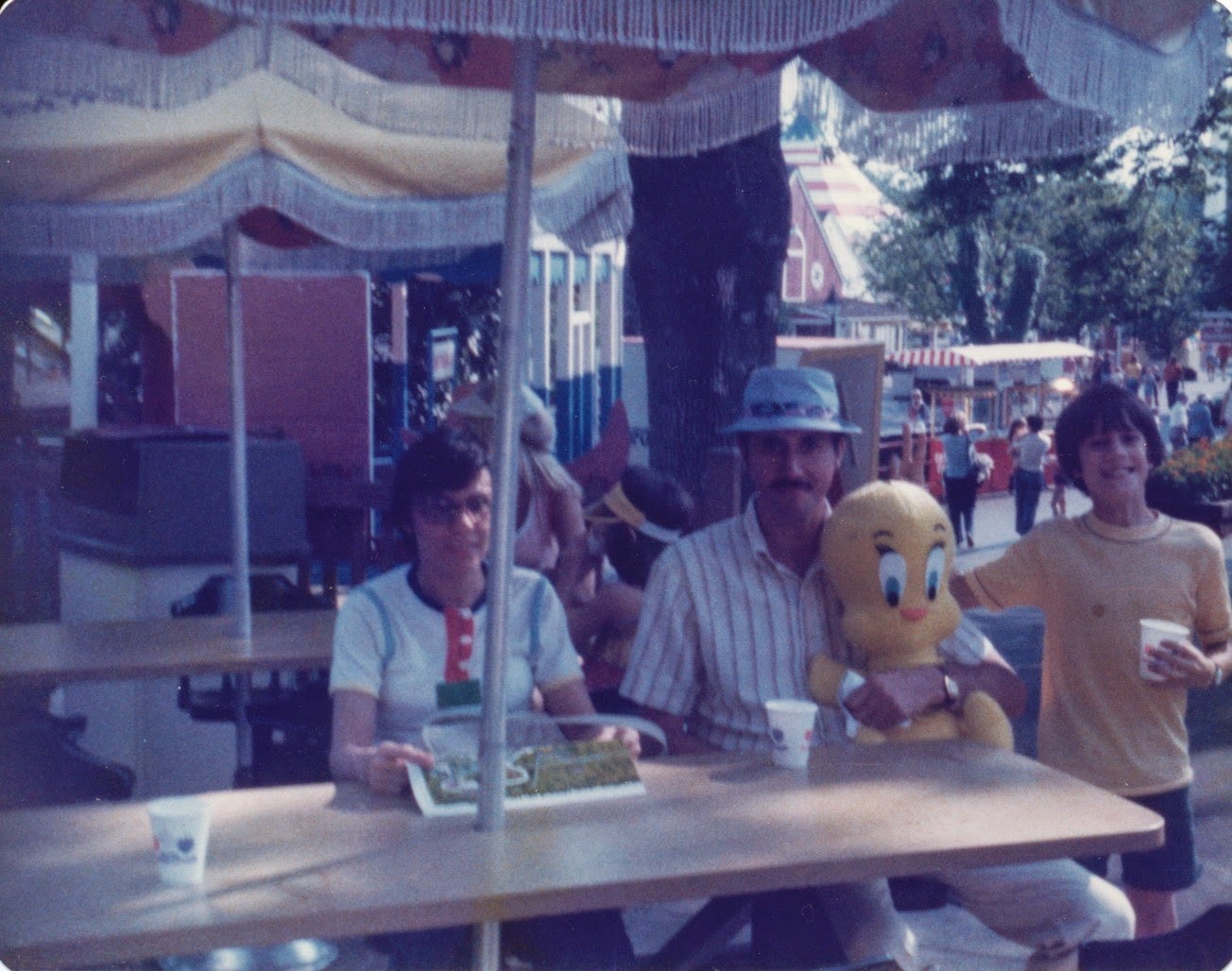 You could also go on a tour of the factory back then, and the gift shop would sell you immense bags of factory-second candies for essentially nothing.  We left with a bag of misshapen Reese’s Peanut Butter Cups that took up most of the trunk of our car.  Tasted the same, though.

So Hershey – what’s not to love?

We drove from Our Little Town to somewhere east of Pittsburgh before stopping for the night.  From there it was a fairly quick ride to Hershey the next day, and after some preliminary fiddling around trying to find coupons for discounted admission (a significant discount, it turned out), we hit the park around 2pm.

The town still smells like chocolate.  The streetlamps are still shaped like Hershey Kisses.  No Tweety Birds that we could find, and that’s probably for the best.

We did a few things together as a family at the park.  We went on the old cars, for example – another holdover from the old days.  The girls drove their own cars with Kim and I riding along as passengers.  It is amazing to think that fairly soon we’ll be doing this on the open road.  It’s a good thing much of my hair is already either grey or gone.  It will save time.  We went up the Kiss Tower, which is essentially a revolving platform where you can see the entire park from Kiss-shaped windows as you ride up the hundred feet or so and then come back down.  And we went on the Ferris wheel, which is kind of the same thing only rotated 90 degrees. 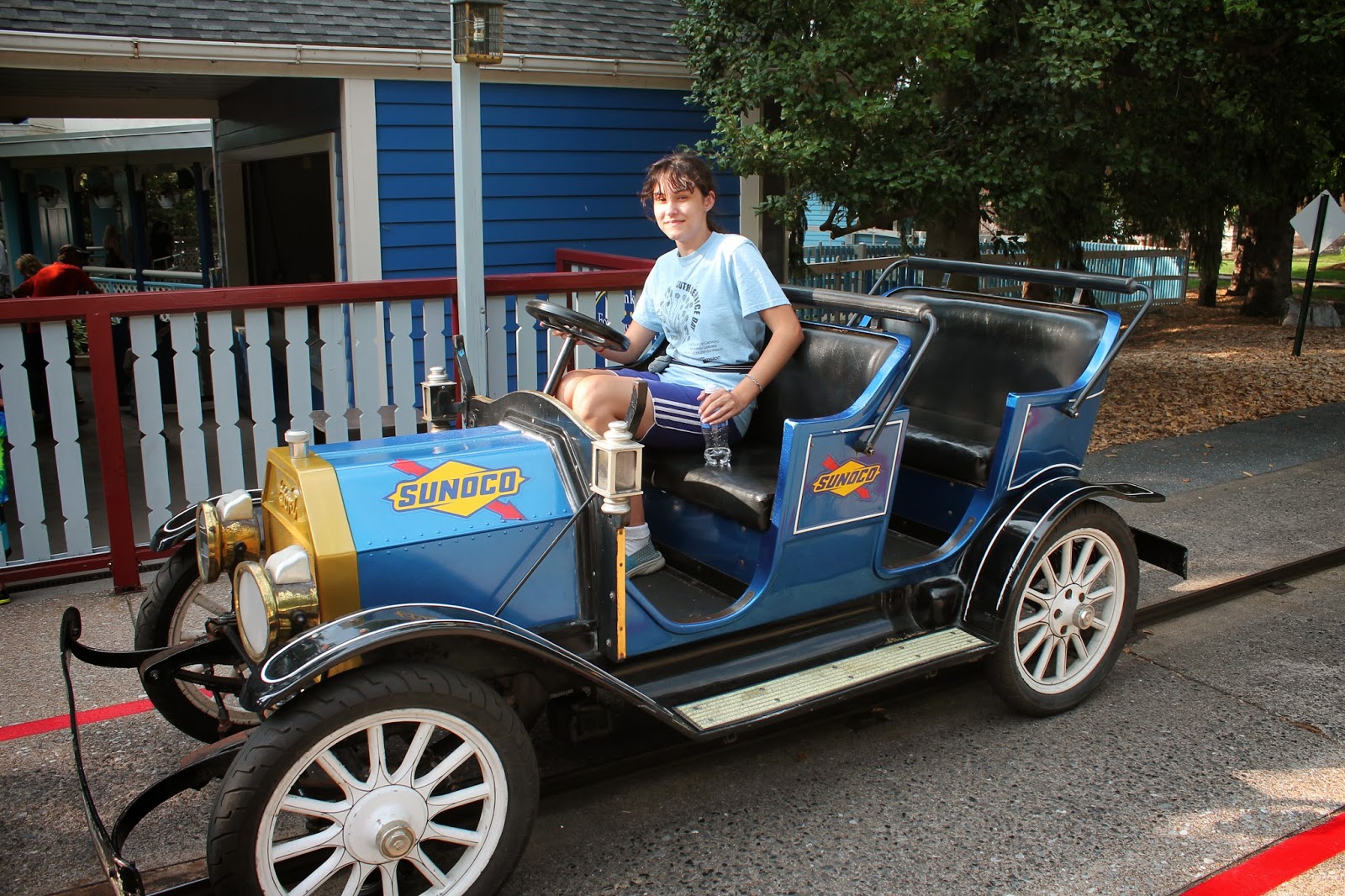 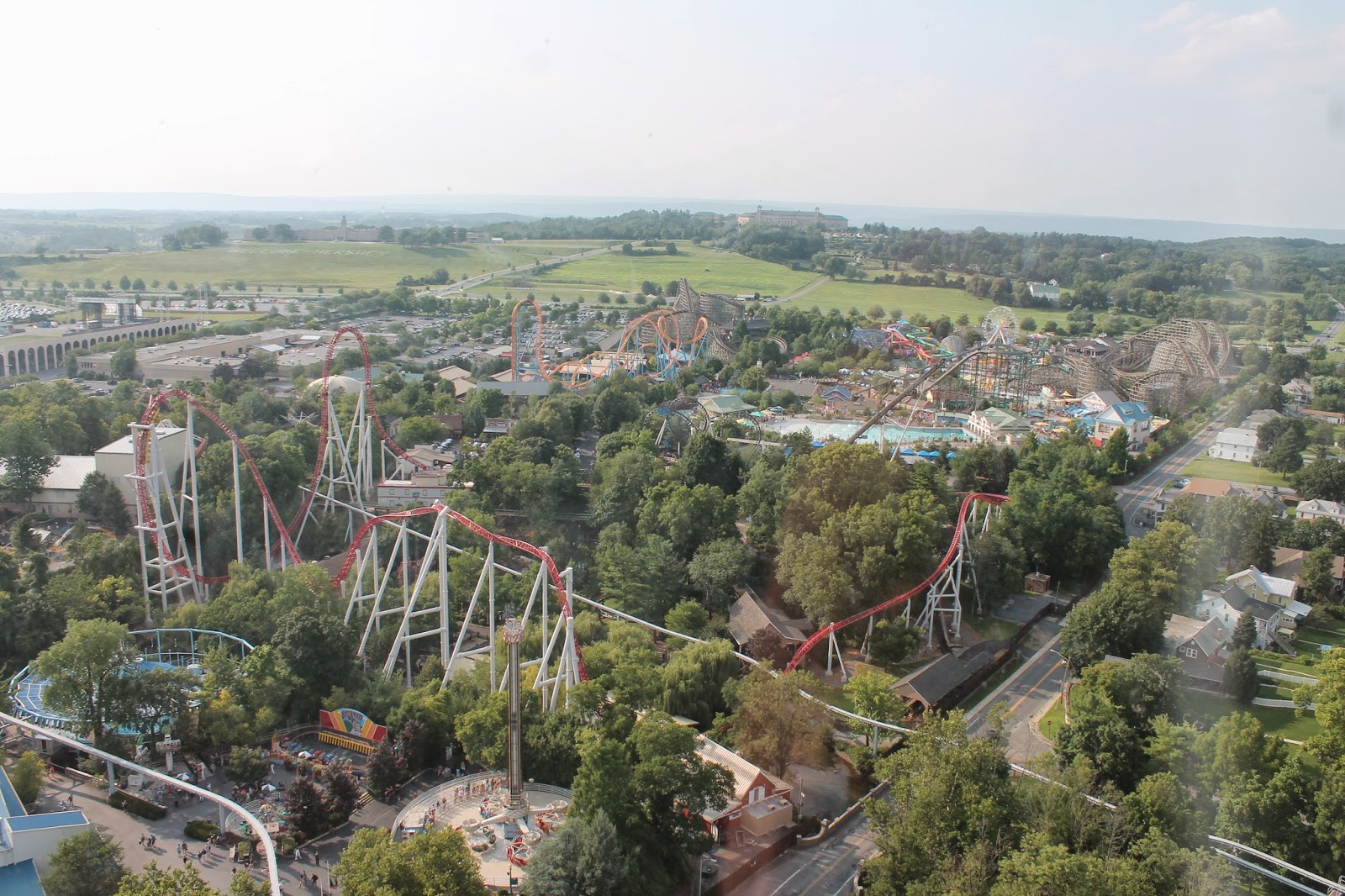 We also went on a couple of roller coasters together.  We raced each other a couple of times on the green and red coasters – neat old wooden coasters that bounce you around pretty hard. 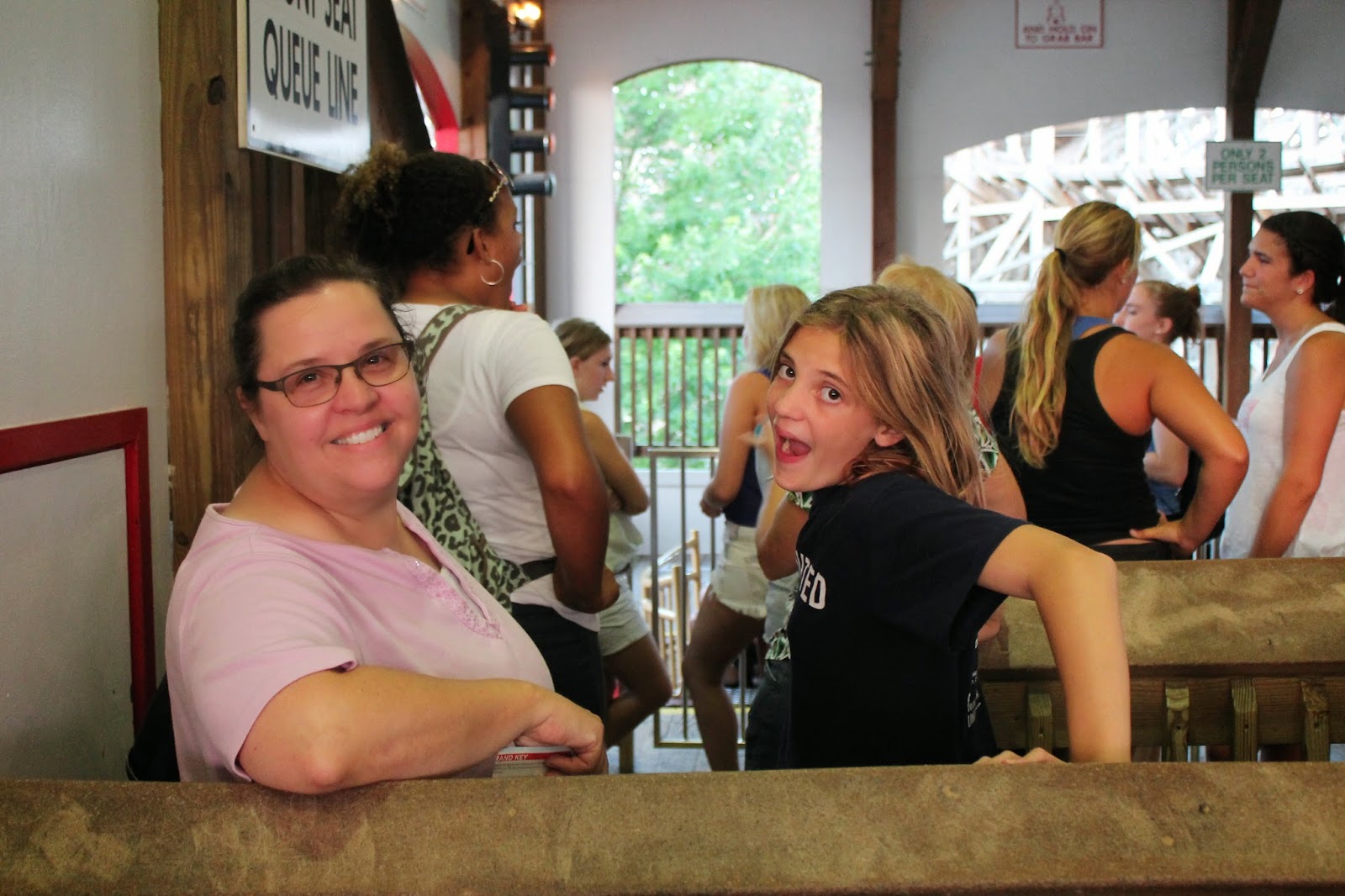 And we went on one of the newer ones, where you strap into the seat and dangle below the track.  Lauren and I had a grand time on that one, but Kim and Tabitha decided that this was enough roller coaster for them, really.

So mostly we split up into pairs.

Kim and Tabitha wandered off on their own to do the smaller rides, not being the adrenaline junkies that Lauren and I apparently are.  She and I, on the other hand, decided that the main reason we were in the park was for the roller coasters so that was what we were going to do.

We did them all. 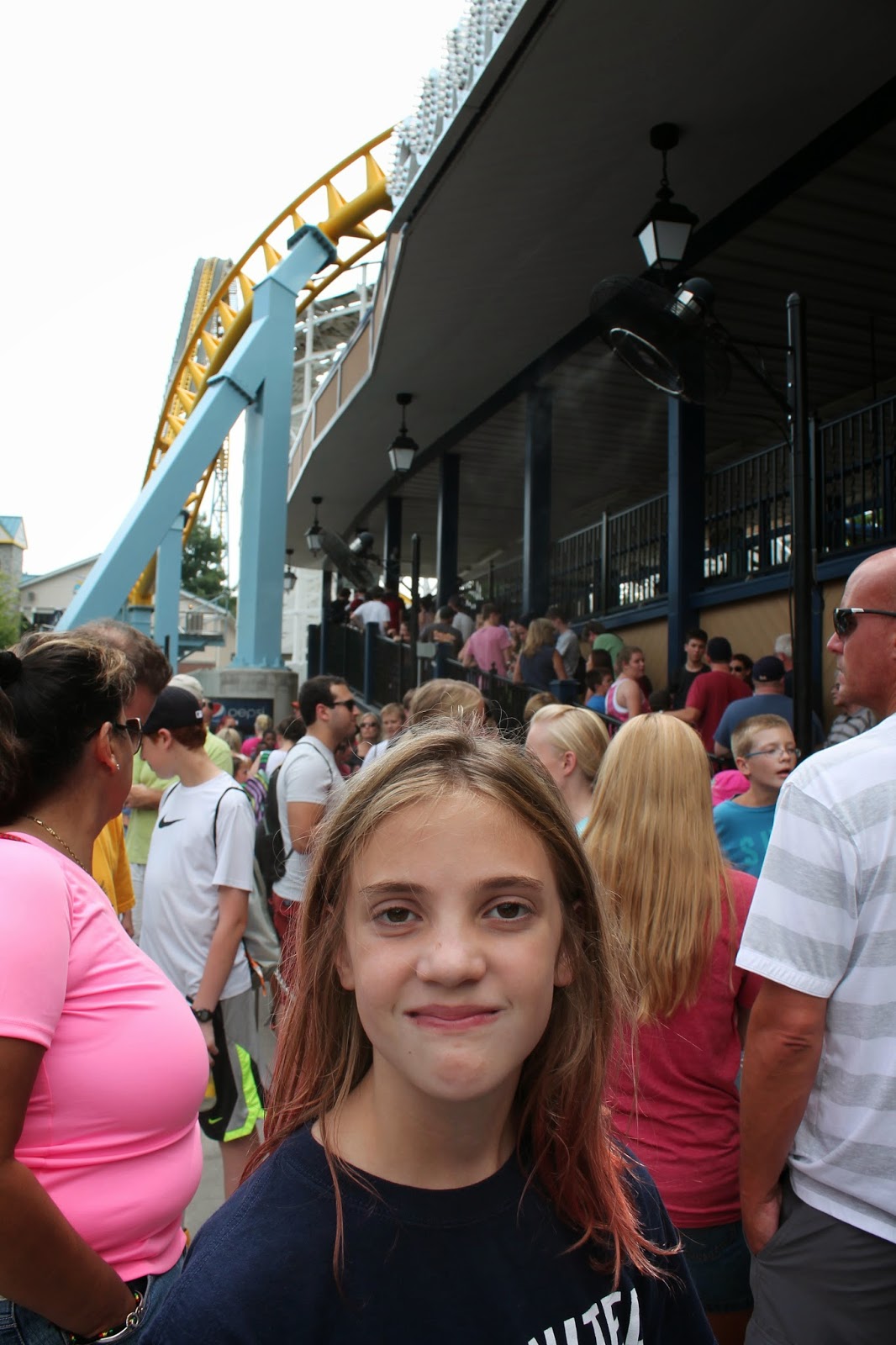 You can’t take pictures on these things.  They tell you to leave even your keys and glasses back at the station lest they fall out and get lost forever from the g-forces, so cameras are right out.  Having been on these rides, I can attest that this is good advice.

But we took what photos we could. 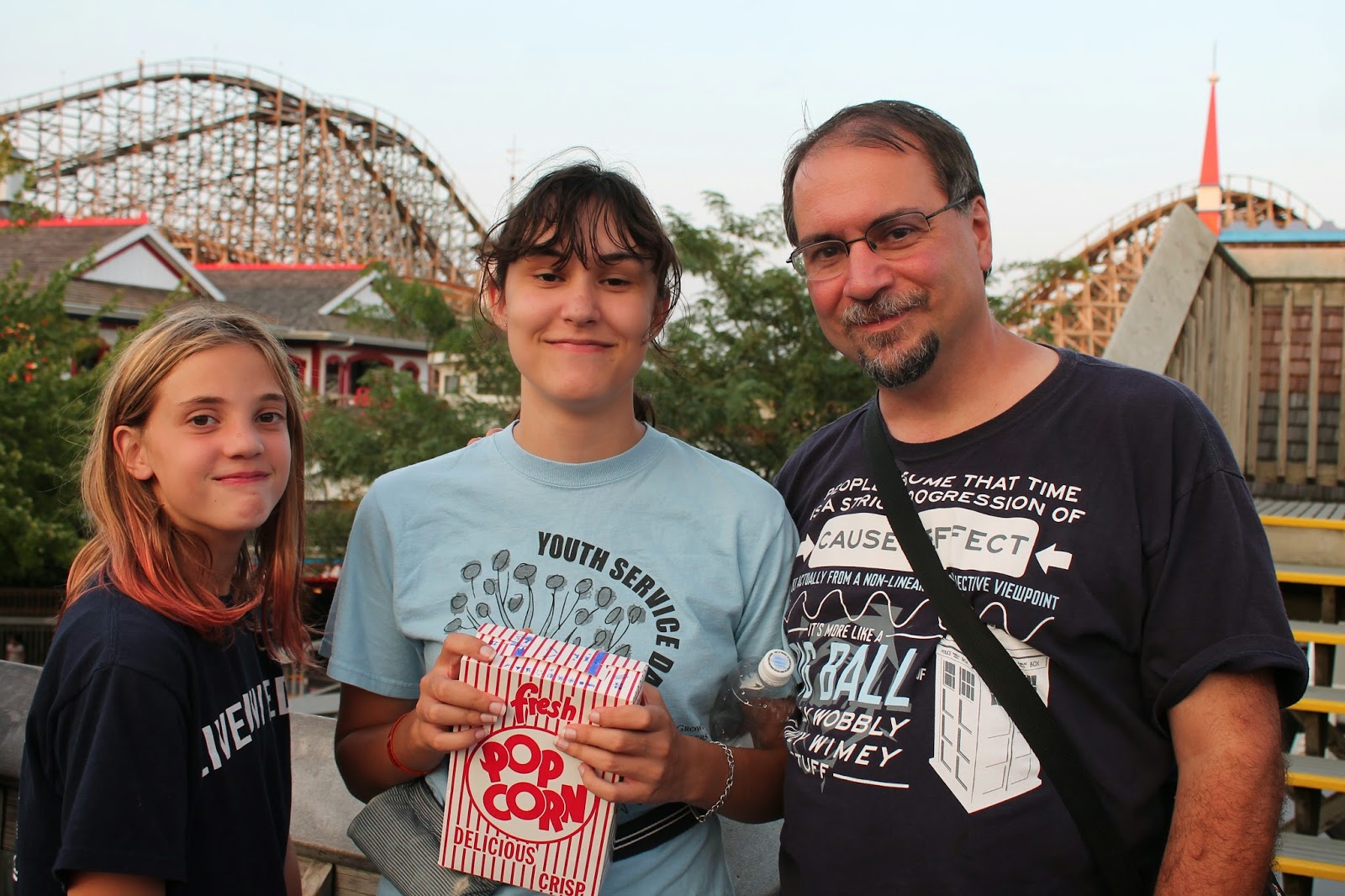 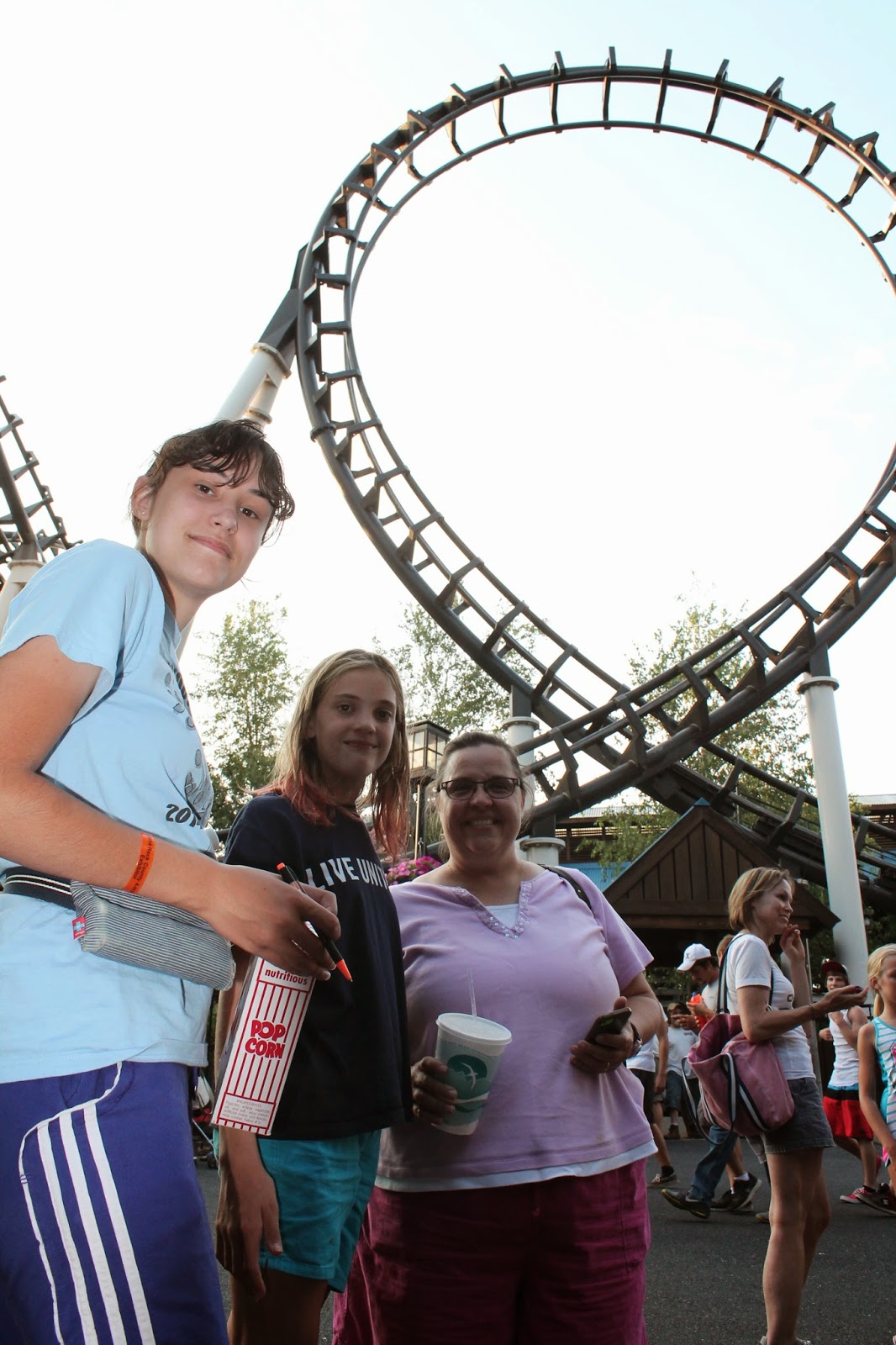 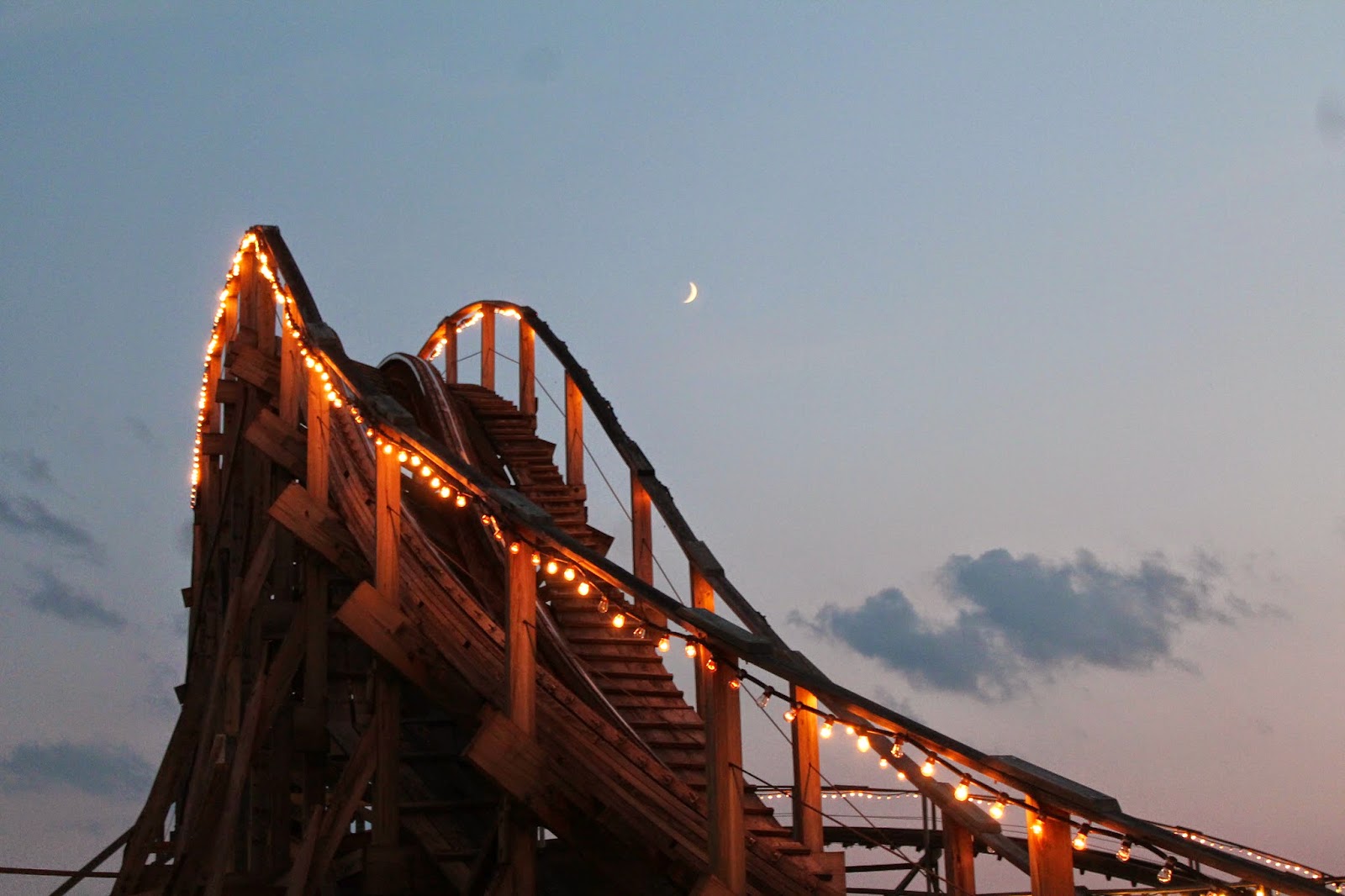 Eventually the park closed and they threw us out.  But the Hershey Museum is right by the entrance and it’s open for another hour.  There’s a nice little exhibit set up where you ride a little teacup car through the chocolate-making process, and then there is the mother of all chocolate stores for you to spend your time and money.  How could we refuse? 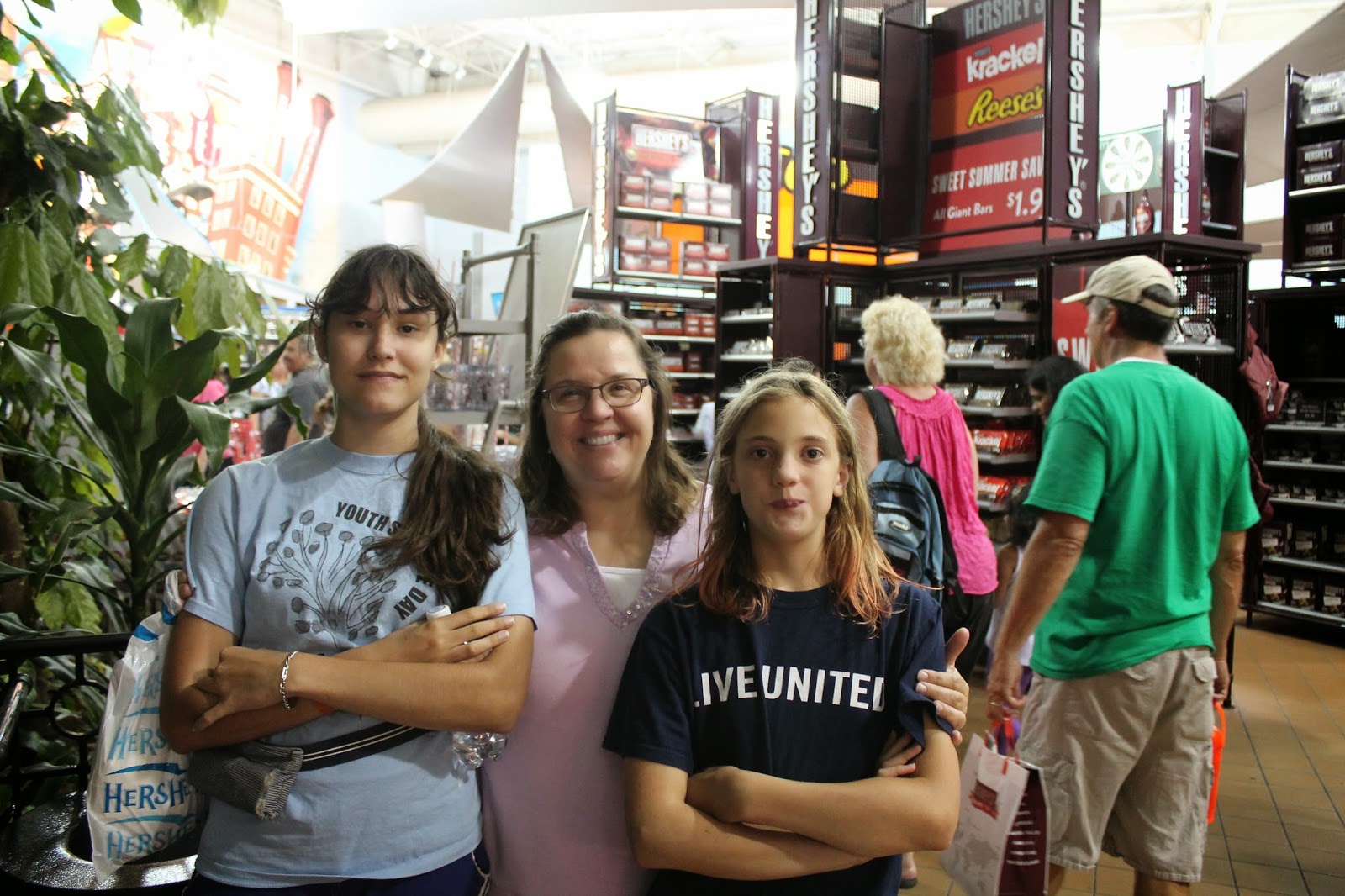 We left the park tired but happy, found our hotel – a tall, sturdily constructed building with nice thick walls – around 11:30pm, and turned in for the night.

Or so we thought.

Not long after we’d gotten settled there came a cyclical rumbling that sounded very much like a poorly tuned diesel engine idling in the parking lot several floors below.  After a while we finally called the manager to come up and take a listen.  “That’s definitely someone snoring,” he said.  This turned out to be true – it was the guy in the next room.

We were amazed.  When did the guy breathe in?  How could he penetrate those walls?  It was almost but not quite fascinating enough not to be annoying.

The manager gave us the option of moving rooms, though as we were already in bed by that point we stayed.  So he took a bit off our bill, which was very nice of him.  Eventually the guy in the next room either turned over or choked to death, and it got quiet again.

And the next day we continued east.
Posted by David at 12:38 PM

I adore wooden roller coasters. That is all.

Being from western Maryland, Hersheypark was our (infrequent) theme park of choice as well. I remember the chocolate, the log flume, and the olde tyme cars! :)

Janiece - I love roller coasters of all kinds, wooden or otherwise. The wooden ones are more bouncy.

Anne - They still have the log flume too, though for some reason we didn't go on it. Not enough time; too much wet for me.