Waiting to be Judged, Part 2: Tabitha

Fair week is now revving into high gear here, with more and more of the animals and exhibits arriving on the fairgrounds.  Lauren’s rabbit Milkshake is now safely ensconced in his semi-detached estate in the rabbit barn – showmanship and judging to take place on Wednesday – and tomorrow the five chickens who made the cut will be shoveled into place in the poultry barn.  The tents are set up.  The midway stands ready to accept paying customers (and if there is anything creepier than an empty midway except an empty midway with a solitary clown walking toward you, it has yet to be discovered).  All stands in readiness.

Buckle in, folks – it’s going to be a long week.

Today it was Tabitha’s turn to take her projects in to be judged, which of course meant that it was also time that they were finished.  She has spent the better part of the last month working on her Drawing & Painting entries, with the final pencil drawing being completed this morning.  We also had to stop by the school district’s main office this morning to speak to the IT people, as we discovered that her woodworking entry (“something completed as a school project”) had to be accompanied by a working drawing, which drawing resided on her school Google Drive account whose password had been changed by the IT people at some point since the end of the school year, thus bringing us back full circle.

But it all got worked out.  Everything was finished.  Everything looked good – and yes, indeed, they looked really quite good.  Tabitha has some actual artistic talent that she clearly did not inherit from me, and she put it to good use on these projects.

The one that she spent the most time on and was most proud of was her Flag Map, which was entered in the Mixed Media category. 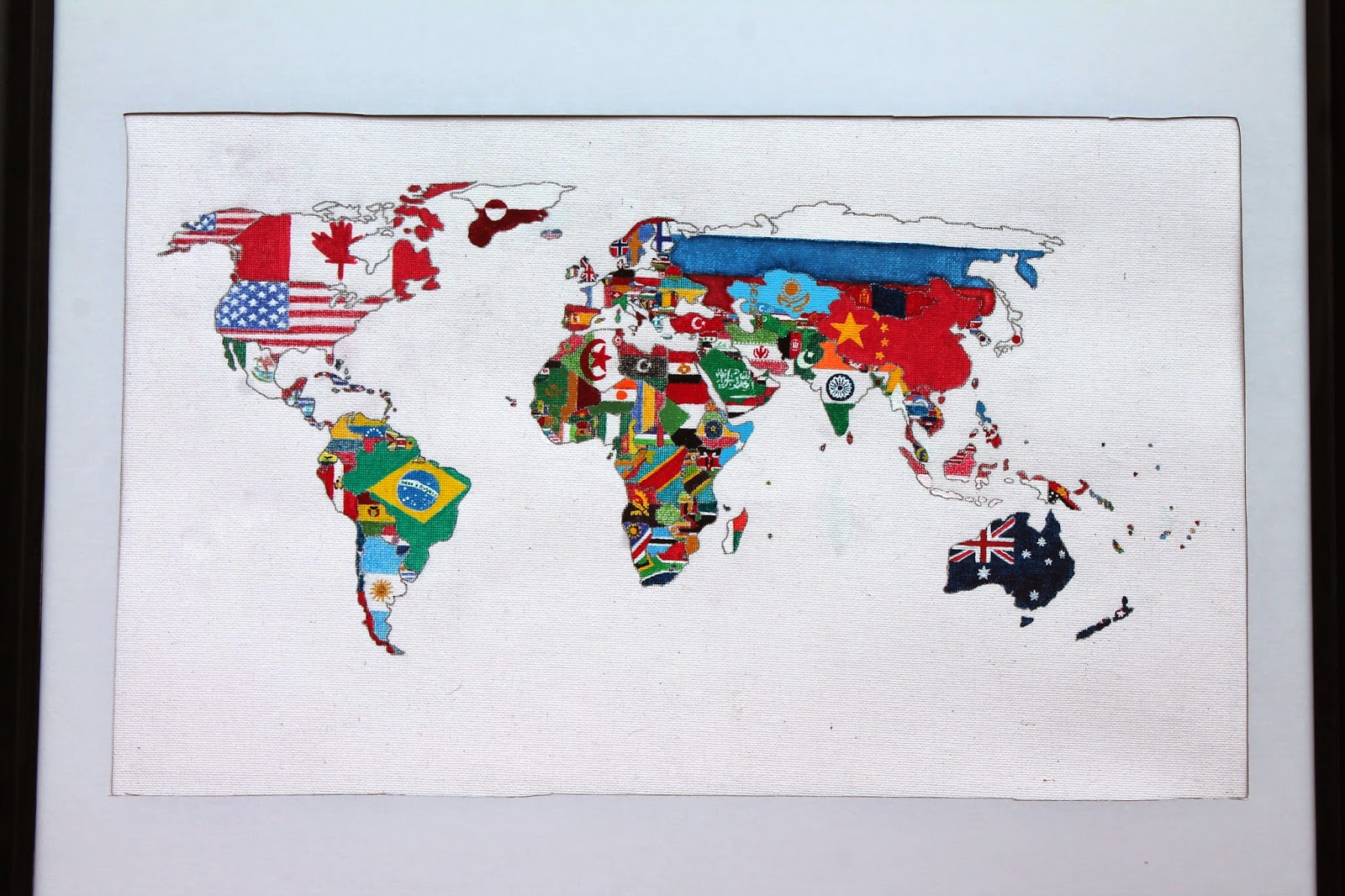 You may or may not be able to see the detail there, but each of those national flags was done by hand, in acrylics, colored pencils, watercolors, and Sharpies.  They got really, really intricate.  It's also a big piece - 11x14 or so, before the frame.  I was very impressed, as was the judge.  For this Tabitha got a Top Blue.

Lauren and I checked after we got Milkshake all sorted out tonight, and a Top Blue it remains – no Merit or State Fair.  But this is impressive enough on its own, really – they give out even fewer Top Blues in the Drawing & Painting category than they do in Photography.

This is her Watercolor entry, a landscape in fantastical colors.  This got a Blue. 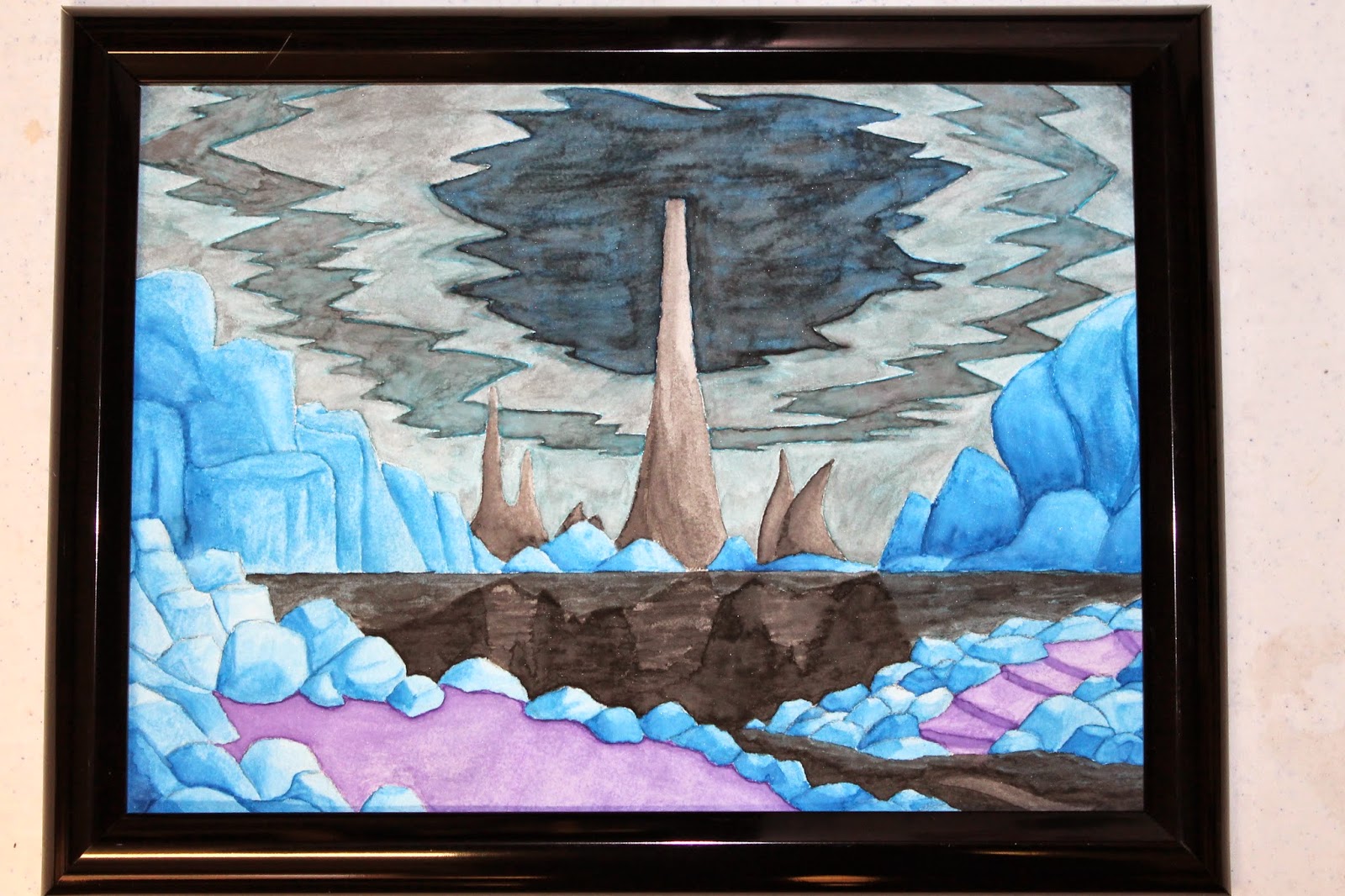 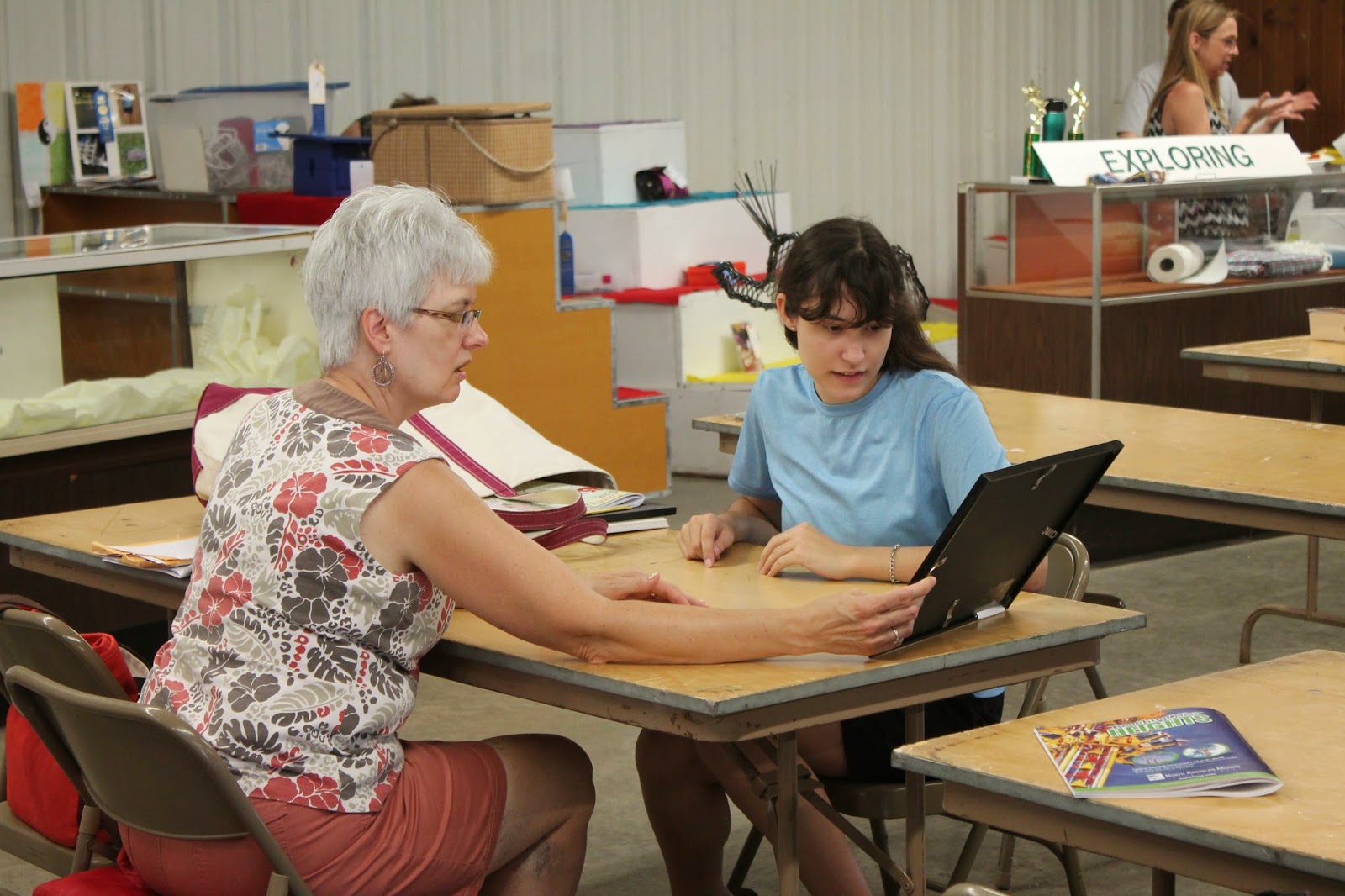 Her pencil drawing – another landscape, one that played a bit with lines and perspectives – got a bit shorted because of the time spent on the other two but it worked out nicely in the end and the judge gave it a Red. 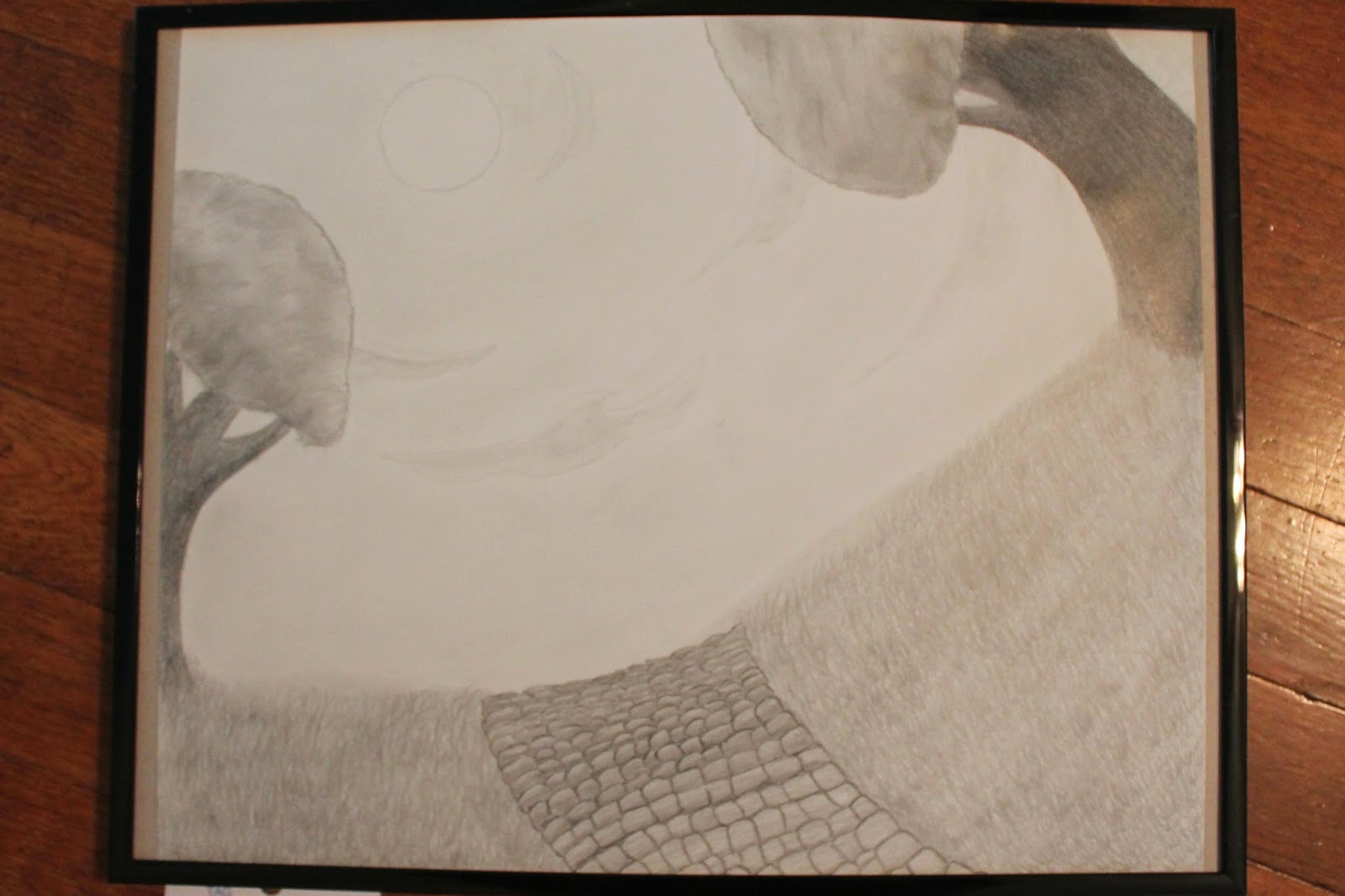 From there we walked across the way to the next building for the Woodworking area. 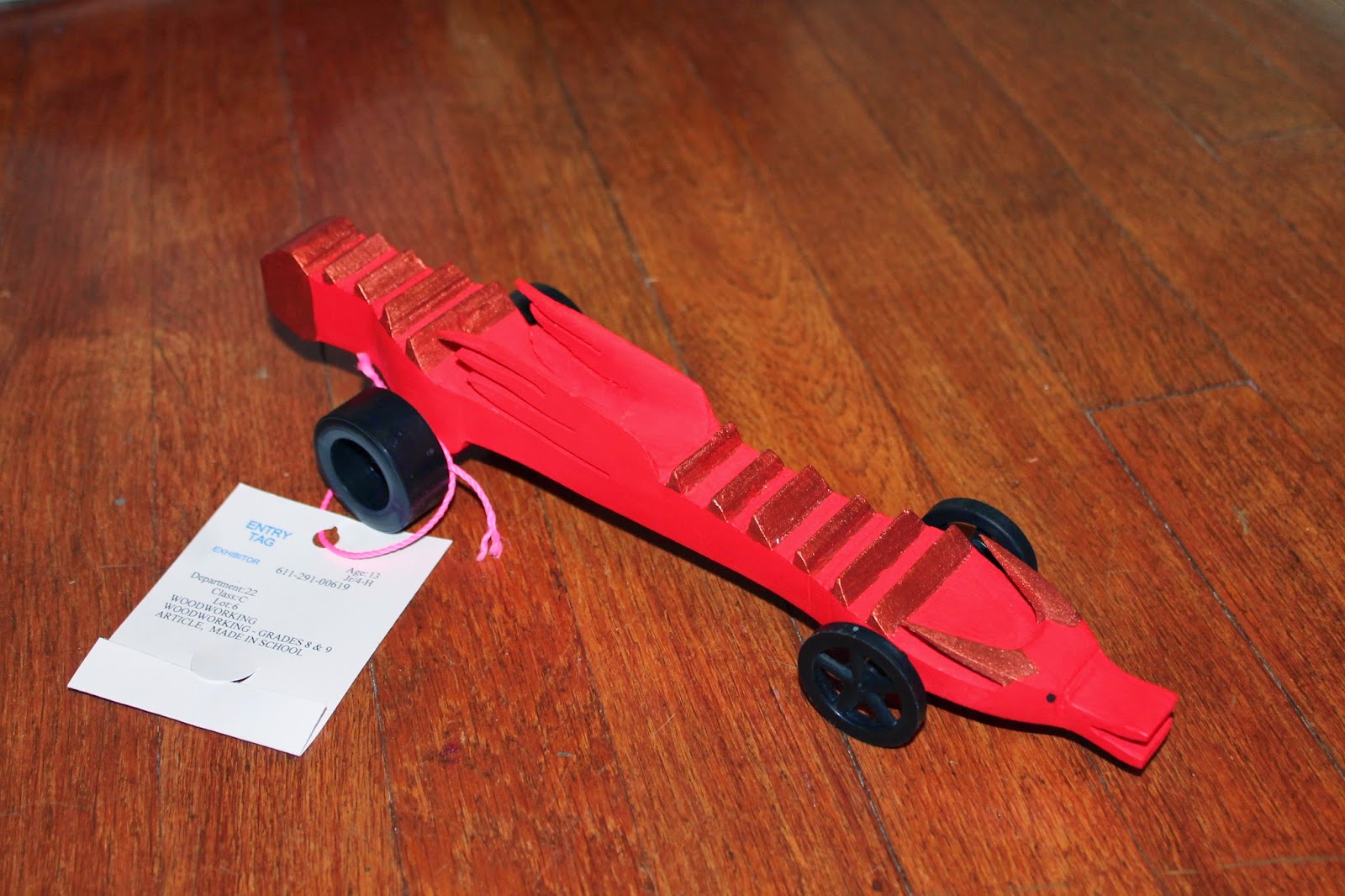 Smaug was designed as a CO2 racer for one of Tabitha’s classes this year over at Mighty Clever Guy Middle School.  The body was carved out of a single block of wood, and then she put the wheels on and painted it.  There’s a big hole bored into the back for the CO2 cartridge, and it did actually race against her classmates’ vehicles at the end of the school year.  Smaug did not win those races because, as Tabitha said, “it’s not really designed with aerodynamics in mind.”  But it did win a Blue at the county fair, and that’s quite a thing in itself.

So a Top Blue, two Blues, and a Red, which sounds awfully familiar after Friday.

I know three boys who would love to play with the Smaug Racer.