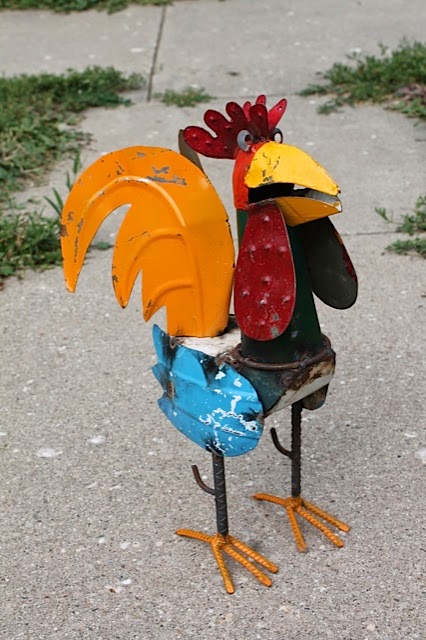 Bob is the newest addition to our family, courtesy of one of the vendors down at the County Fair.  We’ve been up to our ears in poultry for a while now, so it seemed pretty much foreordained that we would come home with something like this.

She named him, of course.  She and I were walking around the fairgrounds yesterday when we stumbled into the vendor’s tent and came out with this anonymous 18”-tall metal chicken.  I suggested a few names, most of them female, but – being the chicken expert in the family – Lauren just rolled her eyes at me and said, “He’s a rooster, Dad.”

So Bob it was.

We’re not sure what we’re going to do with Bob.  We thought about putting him out front in the garden, but there are a number of folks in this neighborhood about whom we have doubts and we’d rather not have to put an alarm system on our metal chicken.  We’re not sure they even make such systems, or if they do whether such systems are affordable to the everyday consumer.  Chicken security systems may well be pretty high tech.  They probably involve lasers.

He might end up at the farm with the actual live chickens, though they may not appreciate having him around.  They would probably see him as something of a satire of their very existence, which is of course absolutely true.  Chickens don’t have much to call their own.  They’d get defensive.  There would be combat.  Having observed our chickens in action fairly closely this past week, my money’d be on Bob.

So likely Bob will end up in the back yard, where he can freak out the cat every time she goes outside.

Really, what else could a metal chicken want out of life?

Please tell me you have seen this.
I really wanted to get a giant metal chicken at the fair, too. May I come visit yours? http://thebloggess.com/2011/06/and-thats-why-you-should-learn-to-pick-your-battles/

Of course I've seen that! I love The Bloggess. :)

If you want to see Bob in person I need to know who you are first.

Uncle Bob will be so touched!

I have lasers we could turn into a chicken security system. But my "consulting fees" aren't cheap. :D