It’s been so long since I’ve seen a Major League Baseball game in person that that last three stadiums I paid to get into are no longer there.  I don’t miss those stadiums, really.  They were dumps, especially Veterans Stadium – a concrete bowl in the middle of South Philadelphia that had about as much charm as you’d think it would, as well as its own fully functional criminal court.  They’ve all been replaced with much nicer stadiums, from what I hear, even in Philadelphia, and perhaps someday I’ll see a game inside one of them.

You have to see baseball games in person.  It’s not really a sport designed for television.

I’m not the baseball fan I used to be, growing up.  I lost interest after the strike in the early 90s, and while I’ve slowly gotten back into it bit by bit – the Phillies’ World Series victory in 2008 being pivotal in that regard – it’s still fairly low down on my list of sports these days.

The fun part of baseball games, though, is that you can bring a lot of people to them and hang out together.  They’re not like football games, where you only get eight of them in your own stadium and thus it costs roughly the equivalent of the GNP of a small third world nation to go to a game (not including parking).  No, you get to choose from more than eighty home games per season, many of which are on Tuesday nights where nobody really wants to be out anyway.

Seating is not limited, in other words. 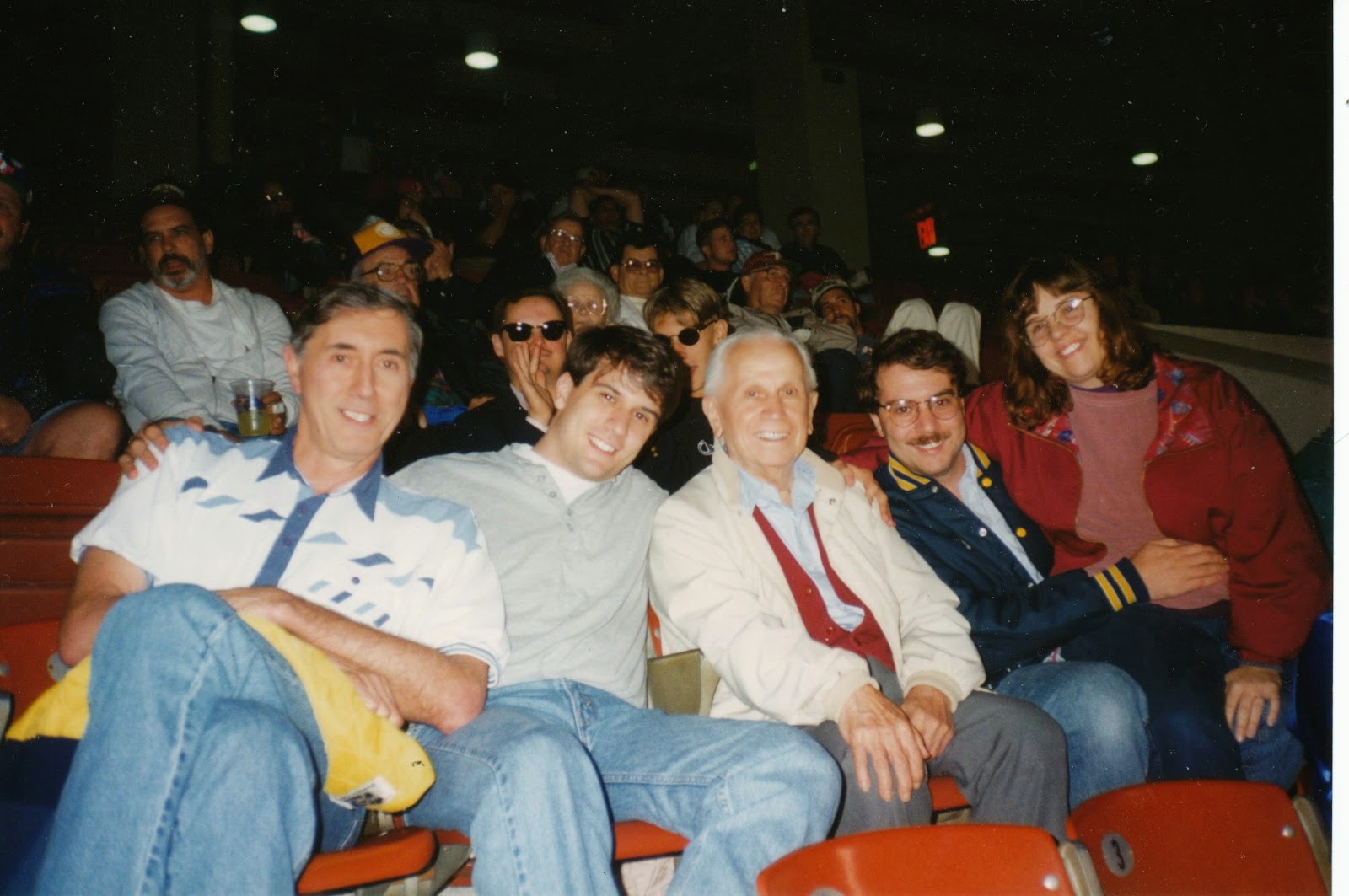 This photo is from 1995.  Someone in the seats in front of us volunteered to take it, so we’re all in it together.  We’re somewhere in the middle seats of the stadium – not down by the field, not up in the upper deck – and on the third base line, if I recall correctly.  The Phillies are playing the Astros, and if my note on the back of the photo is correct they will lose, 6-5.  We’re used to that, being Phillies fans.  Kim and I are about five months from being married – she’s been out to see my extended family twice before this trip, so she knows full well what she’s getting into.  My dad’s on the left, with my brother next to him.  And there’s my grandfather in the middle.

My grandfather was the real baseball fan in the family.  We enjoyed the games, but they were his passion as far as sports went.  If a game was being broadcast, he had it on.  He even played the game himself, way back in the early part of the last century - usually somewhere in the infield, on neighborhood teams with names like Mayo A.C., Kimball A.C., Penrose, Passyunk Square, or Cresmour.  We have a scrapbook of some of the highlights of his career.  The newspapers used to report that sort of thing.

He’s in his early 80s here in this picture.  I’m guessing this is the last Phillies game he ever went to, since his health began to fail not long after this was taken.

That’s the thing about photographs – they freeze one moment in time, and you can look at the people in them and see that they don’t know what’s coming next, but you do.  The game hasn’t been lost yet.  We’re all happy and healthy, enjoying each other’s company on a nice summer evening in South Philadelphia.  It’s a moment to remember.

The guy in the sunglasses waving at the camera, though – who’s he?
Posted by David at 1:49 PM

You say baseball was not made for TV. True.

Baseball was made for radio. (grin)

You are correct about that, definitely. :) I actually thought of putting a comment to that effect into the post, but I couldn't get it into the flow of the writing.

I spent a large part of my childhood listening to Harry Kalas narrate the Phillies games on the radio. To this day that's what summer sounds like to me.

AM radio. Sports on FM is a waste of bandwidth.