The Story of a Monday, Part 1: A Graduation at MCGMS

Time is nature’s way of preventing everything from happening all at once.

By that standard there has been a breakdown in time recently, as pretty much everything has been happening all at the same time.  The theoretical physics folks need to know about this, because as space and time collapse toward singularity there will be ample opportunities to convert this into large grants for those who are on top of things.

A lot happened on Monday.  I thought about putting it all into one big post, but then that seemed kind of unfair to the various events and the people in them.  So I’m going to parse the three biggest events out into their own posts, because it’s my blog and I get to do that.

I’d never spent much time in the gym down at Mighty Clever Guy Middle School before Monday.

There are good reasons for this.  For one, there was never any real call for me to do so.  None of the events that I attended or volunteered to help at required me to be there, really, and for a middle-aged man to hang out at a middle school gym without being required by some outside force to do so is just way too creepy.  For another, well, imagine stuffing a finite space – even a large finite space – with dozens of unwashed 13-year-olds and telling them to run around for 47 minutes, eight times a day, 36 weeks a year and see how much the thought of wandering in there appeals to you on the last day of school.

But when the event is important enough, you go.

It was a lovely day – a bit on the warm side, but with a nice breeze that was amplified by several large ventilation fans the size of draft horses.  The bleachers were rolled out, most of the basketball hoops were pulled back toward the ceiling, and the floor was covered with plastic deck chairs, for today was the Promotion Ceremony for the 8th-graders.

They don’t call it a graduation ceremony anymore.  I guess that’s reserved for high school and college these days, on the theory that it implies that you’re headed outward, toward new institutions and systems, whereas a promotion ceremony is more for moving up within the same system.  I suppose it makes sense.  So do we call them “promoteds” now instead of “graduates”?  Nobody ever thinks about things like that when they make those changes, so now it’s my job.  You’re welcome.  I’ll get back to you with a decision eventually.  In the meantime, enjoy the ceremony.

The ceremony began at 1pm and parents began filtering into the bleachers sometime around noon, I think.  At any rate, I got there about 12:30 and the place was already about half full.  I found myself a spot in the bleachers, and Kim joined me not too long afterward.

The 8th-grade band serenaded us while we waited.  They were pretty good, actually.

Then the graduates marched in and took their seats.

Tabitha said they only practiced this troop movement once, and given that I have to say they did a nice job of it.  It’s hard to move that many people into rows of deck chairs with any kind of grace, and they managed it well.  Nobody fell over, at any rate, and that’s always the hallmark of a successful procession as far as I am concerned.

Next there were a couple of speeches.  The principal gave a very nice – and refreshingly succinct – welcome.  Two students talked a bit about their experiences and some of the teachers.  The academic and athletic award winners stood up and were recognized.  The whole thing moved along nicely.

Then came the moment we were all waiting for – the awarding of what was, in accordance with the whole “Promotion Ceremony” aspect, being called a “promotion certificate” rather than a diploma.  They called each kid’s name individually and let them walk across the front of the room to shake hands with the two student speakers and the principal and pick up their certificate, which was a nice touch.  So many times in your life you get lumped together with everyone else that it is nice to have one thing where they actually call your name for everyone to hear.

The students walked across.  They bopped and jived.  Some of them practically danced.  Others hurried along as if anxious to get back into the safety of the crowd.  They all got applauded.  Some were wildly cheered, none more so than the one learning disabled girl who seemed so overwhelmed by it all.  It was a lovely sort of ceremony, really.

Eventually it was Tabitha’s turn.

They’re a lot more casual about these things than they used to be, really.  Back in the Paleolithic, when I was graduating from 8th grade, we had to dress up – jackets and ties for the boys, dresses for the girls.  Since I had exactly one suit, bought for the spate of bar mitzvahs that I attended in 7th grade, and since the gap between 7th and 8th grade is fairly significant for boys, clothing-size-wise, I looked like your basic scarecrow.  It’s much more comfortable now.  Some of the kids were dressed up, but most were wearing nicer versions of what they always wear.

Tabitha chose to wear her Mondrian/Doctor Who shirt, which I felt was an excellent choice for an event that rewards learning. 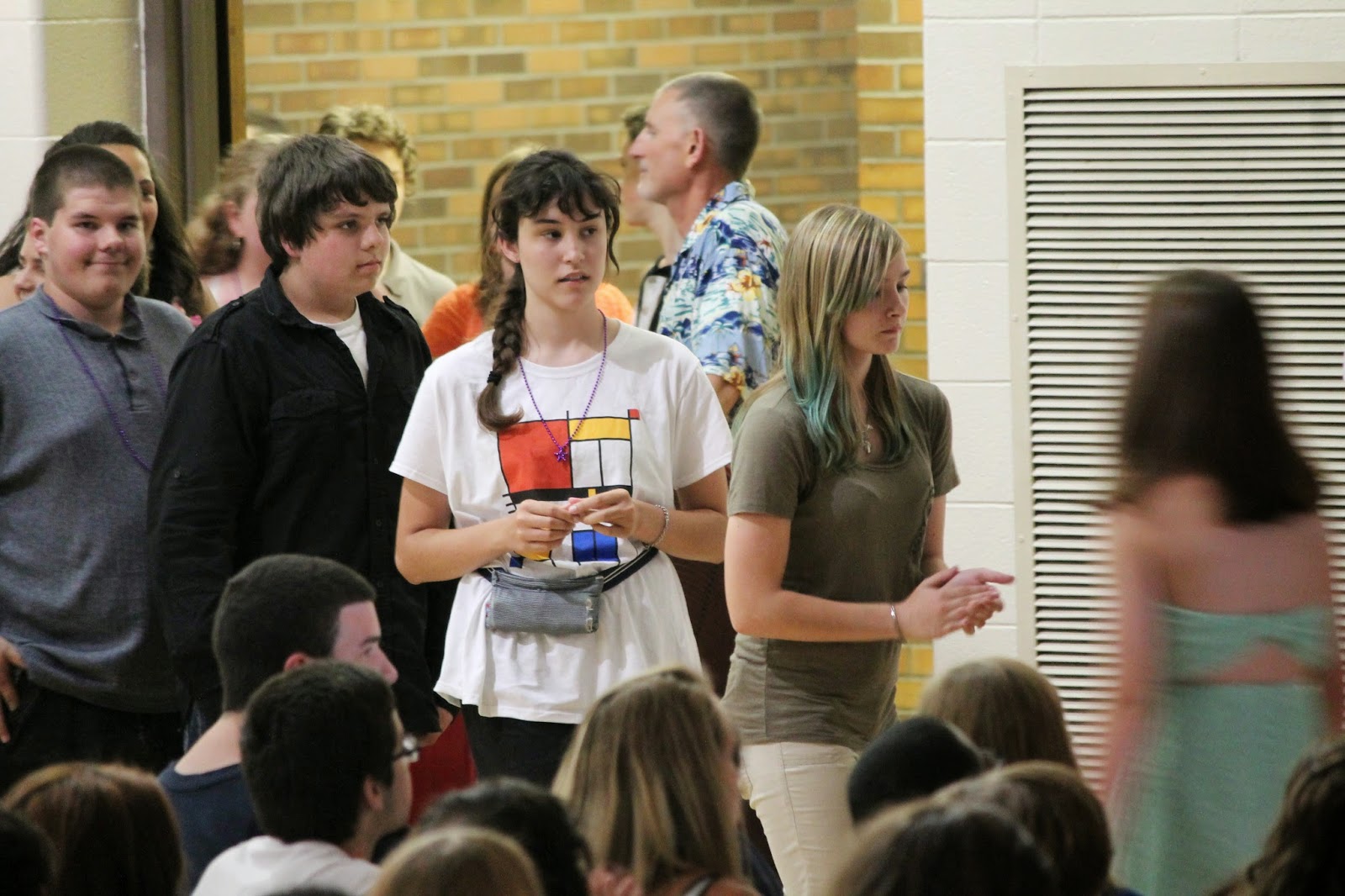 I don’t really have any photos of her accepting her certificate from the principal, since she was a long way across the room and the shutterspeed was simply too slow to catch anything in focus, but trust me it happened.  You can see the basic set up here, a few moments later. 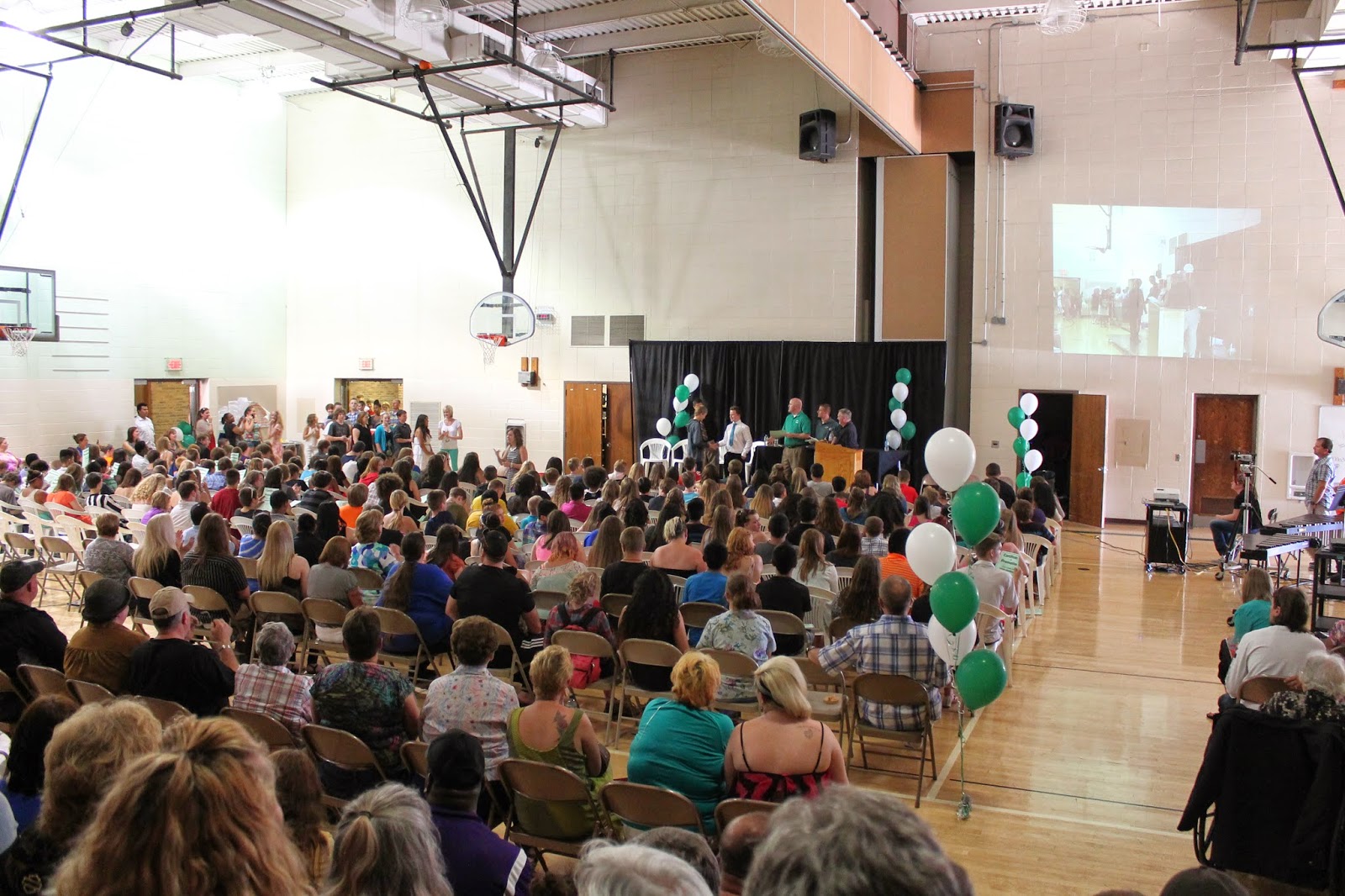 And then it was over, as quickly as it began.

If that isn’t a summary of Tabitha’s whole time down at MCGMS, I don’t know what is.  It’s the essence of parenthood.  The story of life.  Pay attention, folks – don’t blink, or you’ll miss it.

Next year she will attend Local Businessman High School.  Having climbed to the top of one ladder, she will find herself at the bottom of the next one.  There will be challenges, of course, and new people to meet.

She will do just fine.

It took a lot of hard work to get to that ceremony, and I’m glad that they called her name.  I’m proud of you, Tabitha. 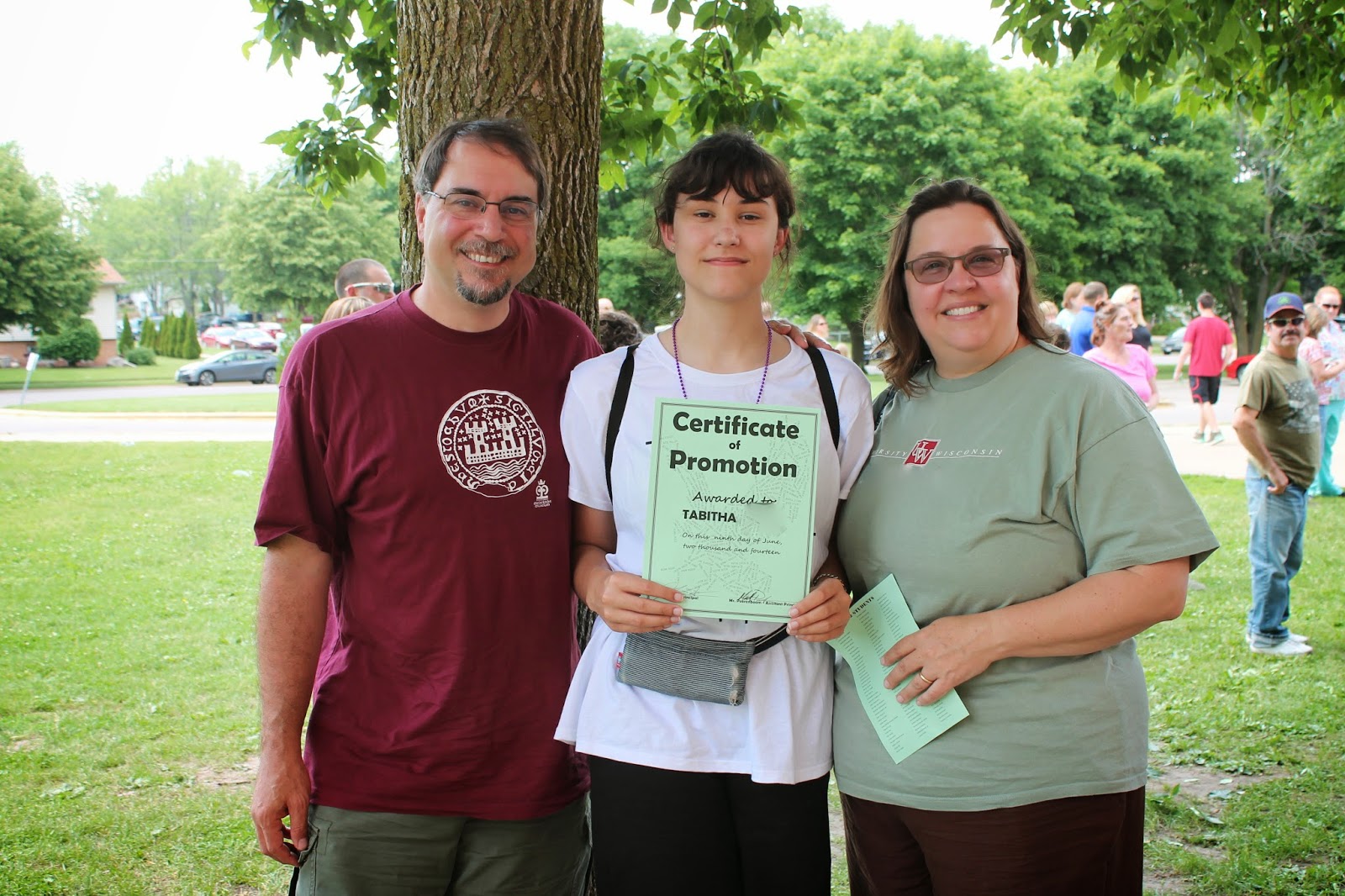 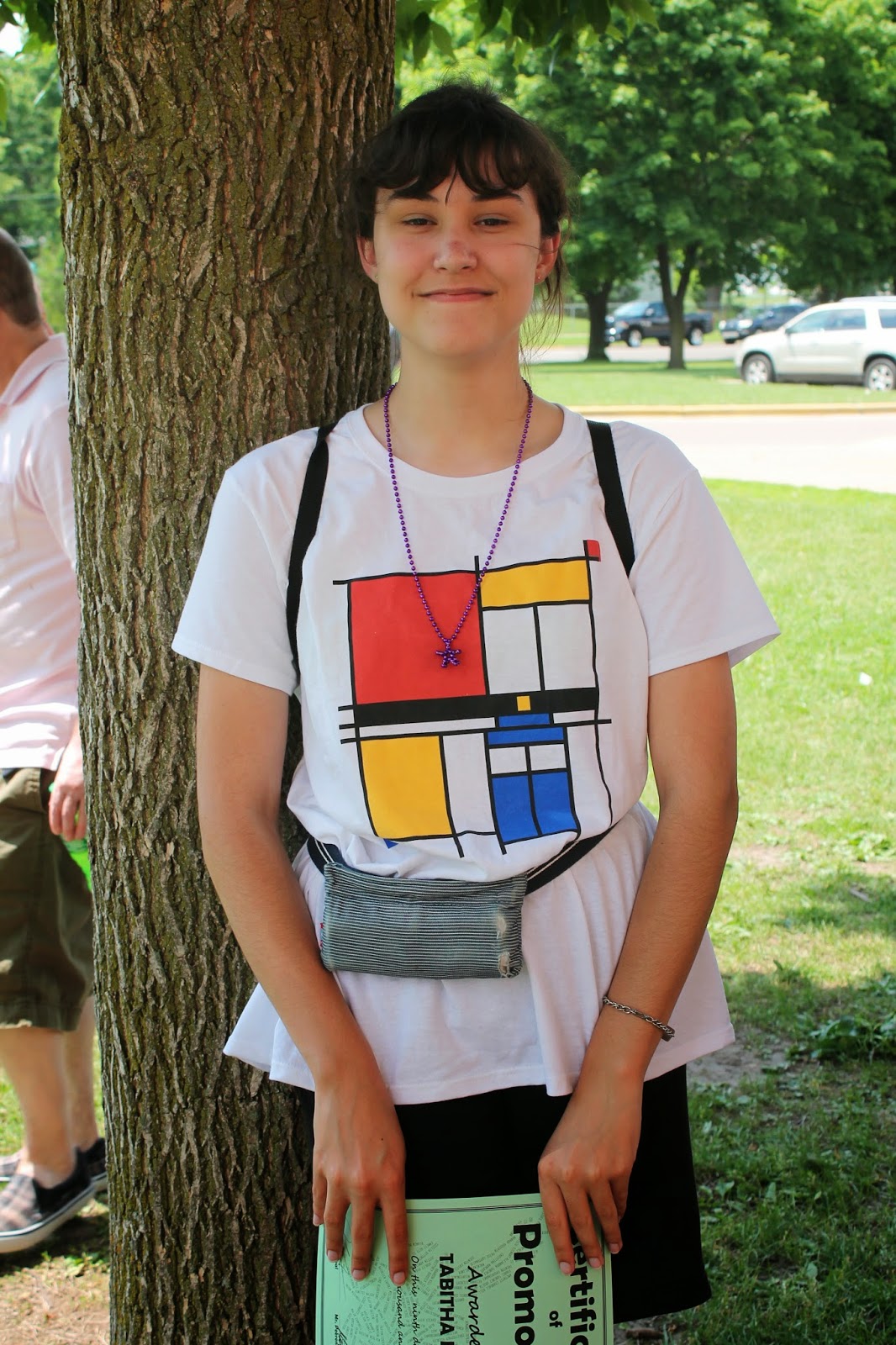 The French word for "graduating class" is "promotion." Go figure.