Memory is what God gave us that we might have roses in December.  (James Barrie)


I remember almost nothing about my high school graduation ceremony.

On the one hand, this is unusual for me.  Even at that age I had a historian’s focus on memory and stories, and I find I can often recall more about that period of my life than I can about why I have gone to the grocery store today.  There I am, standing in the produce aisle wondering what I was supposed to get, and suddenly – BOOM! – all I can think of are the innumerable hangman games that got me through 10th grade (thanks, Carl!).  Such is the peril of filling up your brain at an early age, I suppose.

On the other hand, well, it was thirty years ago after all.  You can’t be expected to remember everything.  Not even historians can do that.

I remember some of the lead-in for the ceremony – the fussing around with the gown beforehand, and things like that.  And I remember what we did afterward.  The school district, knowing full well that most of us were eighteen and therefore legally allowed to do all kinds of catastrophically stupid things if we so chose, herded us directly from the ceremony onto buses and then locked us into a hotel complex for the night, where we were carefully monitored so as not to ascend up to the actual hotel rooms (vide supra, re: eighteen years old) and plied with food, non-alcoholic beverages, and enough entertainment to keep us busy until dawn, whereupon they herded us back onto the buses, returned us to the school cafeteria, and fed us breakfast.  They even held an enormous raffle, where almost everyone won something.

My prize was a vast bottle of cologne with the unlikely name of “Aqua di Selva,” which more or less translates as “Jungle Juice.”  What became of that is yet another of the things that has long escaped my memory, though my guess is that there might be records of it somewhere in the case files of the EPA.

Of the ceremony itself, I remember only three things.

One was the location.  My graduating class was somewhere just shy of 400 people, and there was no way we were all going to squeeze into the auditorium or even the gymnasium (though had it rained they would have tried).  We were instead arrayed in chairs set up on the infield of the track, and our families, friends, significant others, and assorted well-wishers were up in the bleachers.  It was quite a crowd.

Another was that they called our names individually to be recognized, a time-consuming exercise that I nevertheless appreciated.  We’d all worked hard to be there, and it’s nice to be recognized for that by name.  We were supposed to stand when our name was called, and most people dutifully did so.  Me?  When I heard my name I shot up like a rocket and in one fluid motion snatched off my cap and executed a flourishing bow that would have done credit to a vaudeville magician.  I got a nice round of applause for that.

The other thing I remember was this moment: 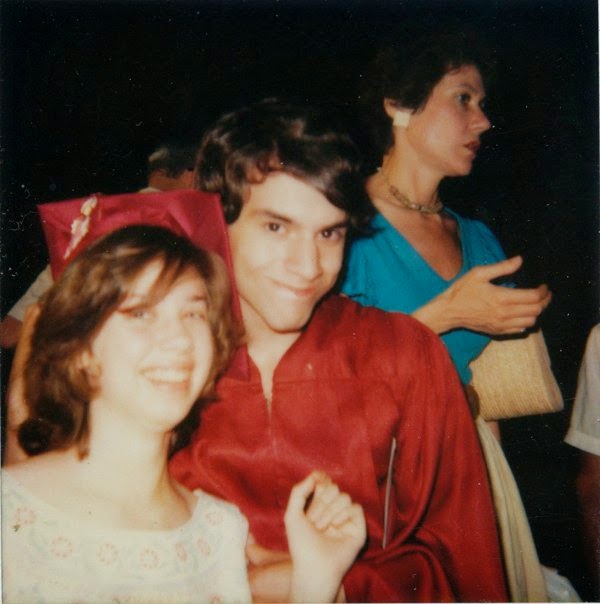 We had a few brief minutes between the end of the ceremony and the bus ride to the hotel and I took my opportunity to head into the bleachers.  My family was there, as was Jenny.  Jenny and I had been together for about six months at that point, and we were hopelessly in love in a way that somehow seems to come easier when you’re young.  You learn to protect your heart as you get older.

Although looking back on it, I knew I wanted to marry Kim after only a couple of months together, so perhaps that is a lesson I never really learned after all.  And good for me, I say.  I have never once regretted falling in love.

What I like most about this photograph is how happy we are in it.  I’m trying – and clearly failing – to put my cap on Jenny’s head, an exercise in joyous silliness.  It was a day of celebration and the world in all of its manifold blessings lay open before us.  You get so few moments of pure joy in this life, and for one to be caught on film like that is a rare thing indeed.

Moments are fleeting by their very nature, though.  Things change.  That's why we have memory.

I went away to college at the end of the summer – the first of three universities I would attend, each one further from home than the last.  Eventually I made a new home.  Jenny and I broke up about halfway through my freshman year, though after three decades and as many as fifteen time zones between us at one time or another, we remain close friends.  They tore down my old high school a few years back and built a snazzy new one in its place.  I’ve never gone back to see it.  Nobody I knew is there anymore.

I don’t mind not remembering most of the graduation itself.  Those ceremonies come and go, and they’re mostly alike anyway.

I remember this moment of happiness, though.

I’m glad for that.