It’s been quite the week.  They all have, really, but this week has been more quite than most.

1. The girls had friends sleep over Friday night.  Both of them.  That meant there were four girls in our house, all between the ages of 10 and 14.  It went surprisingly well, all things considered.  They even went to bed at a relatively decent hour.  Why?  Because curling, that’s why.

2. I shoveled all four girls into the car at 6:25 Saturday morning so I could get them to their weekend-long bonspiel in time for their first match at 8am.  We made it with entire minutes to spare, and they went merrily off to do their thing.  Meanwhile I spent some time with the kitchen staff making sure they had things Tabitha could eat – the people who run this particular bonspiel are really good to work with that way – and then I managed to catch most of their first match before I had to run off. 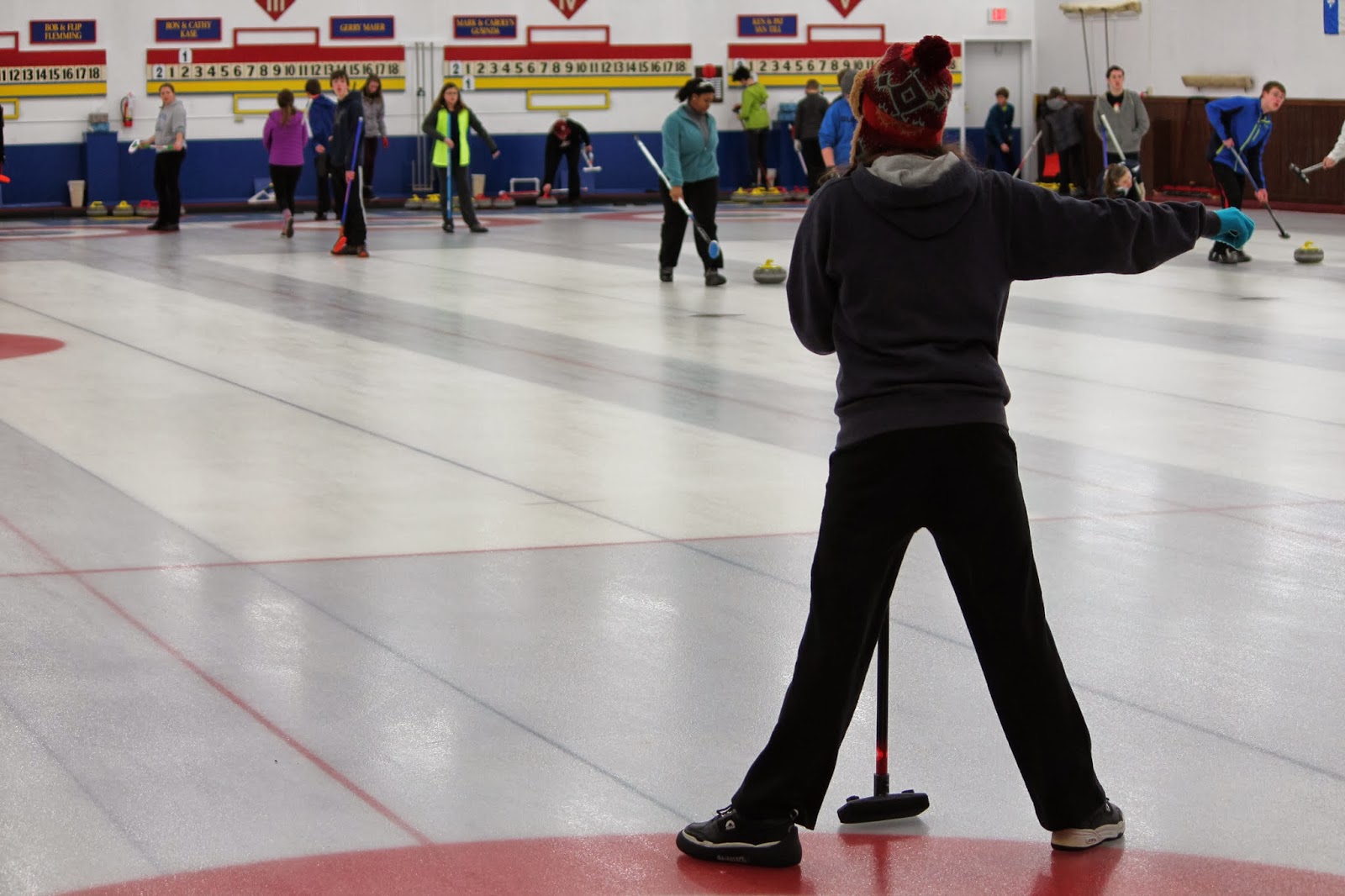 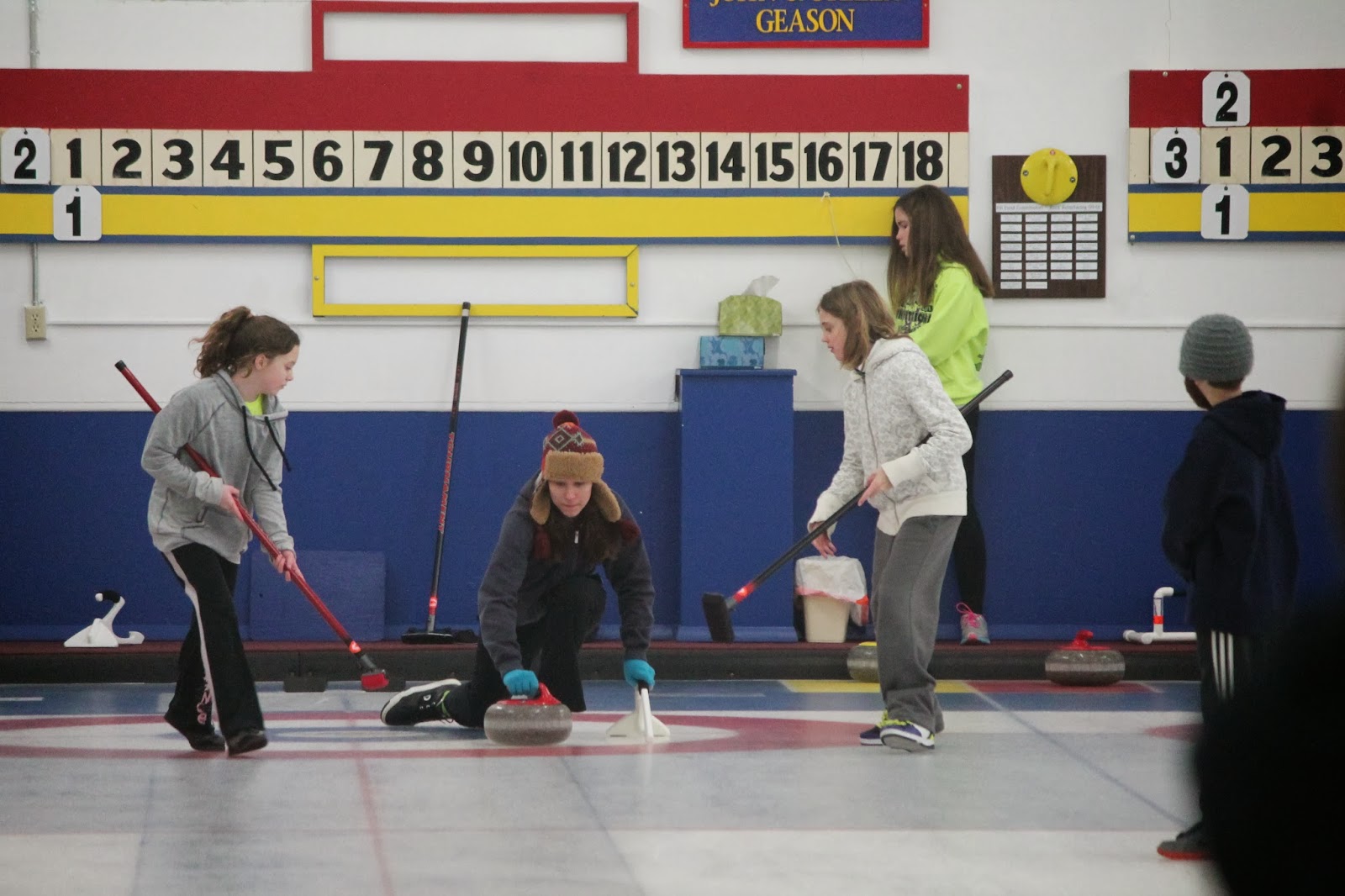 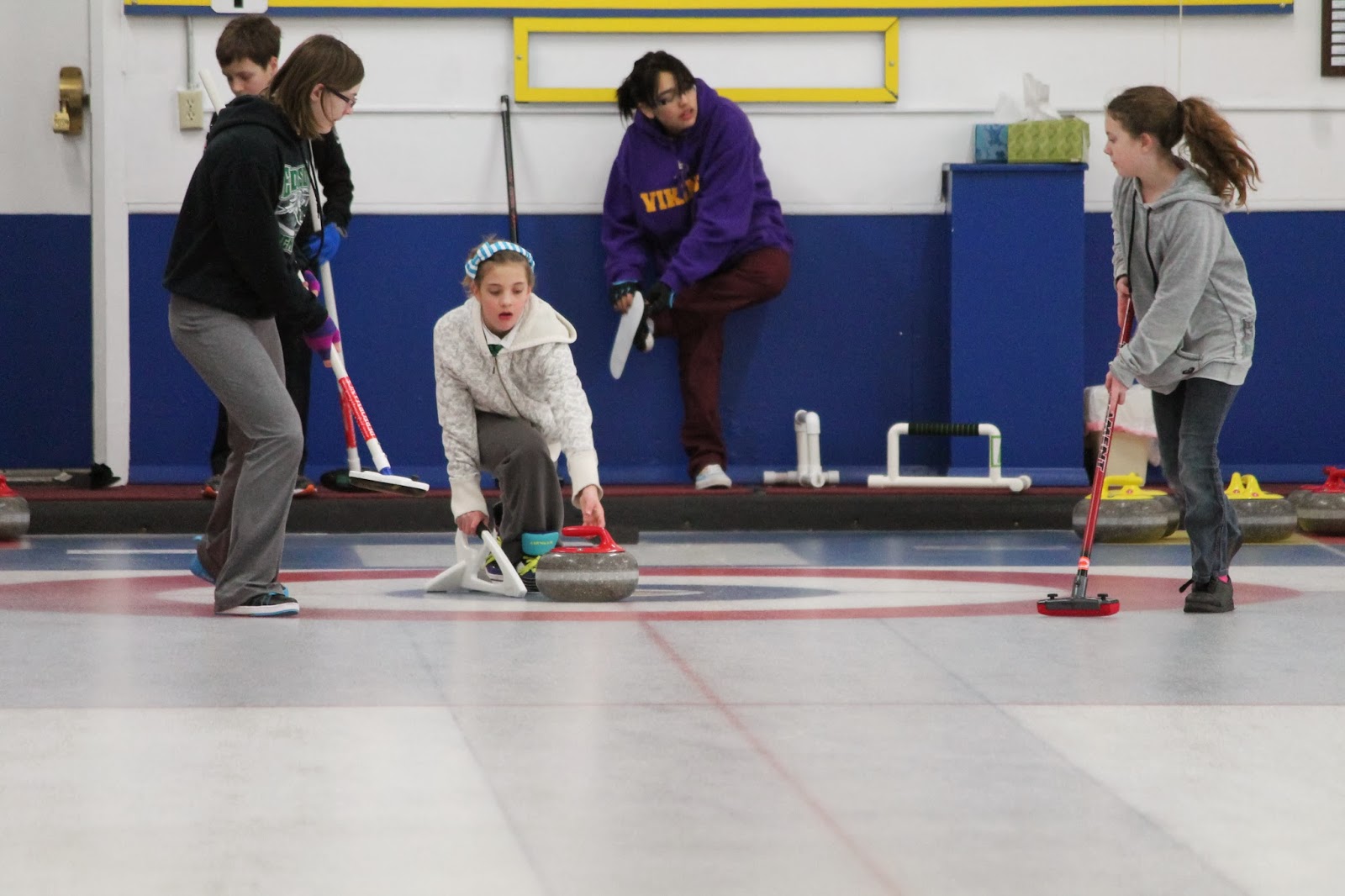 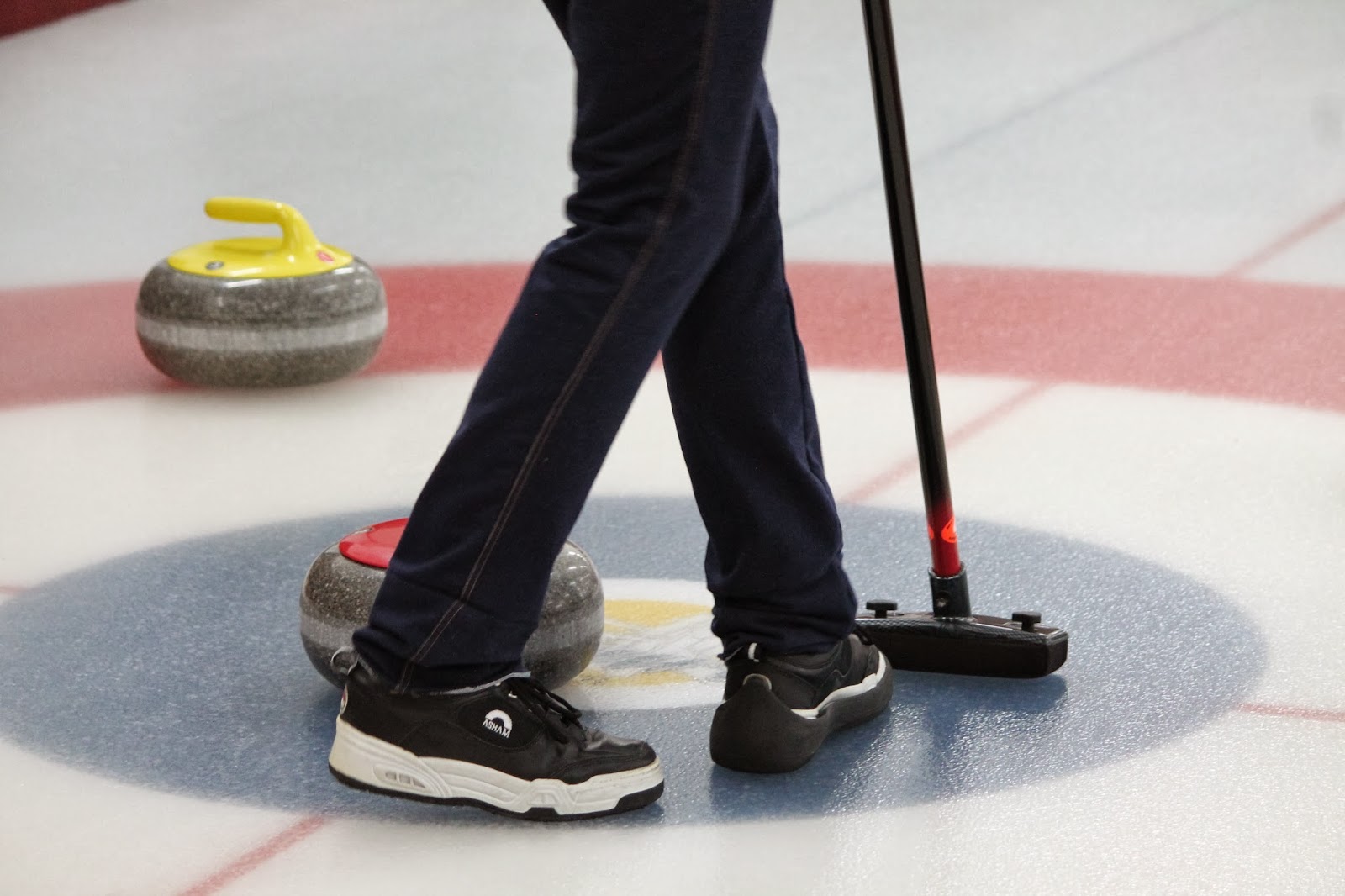 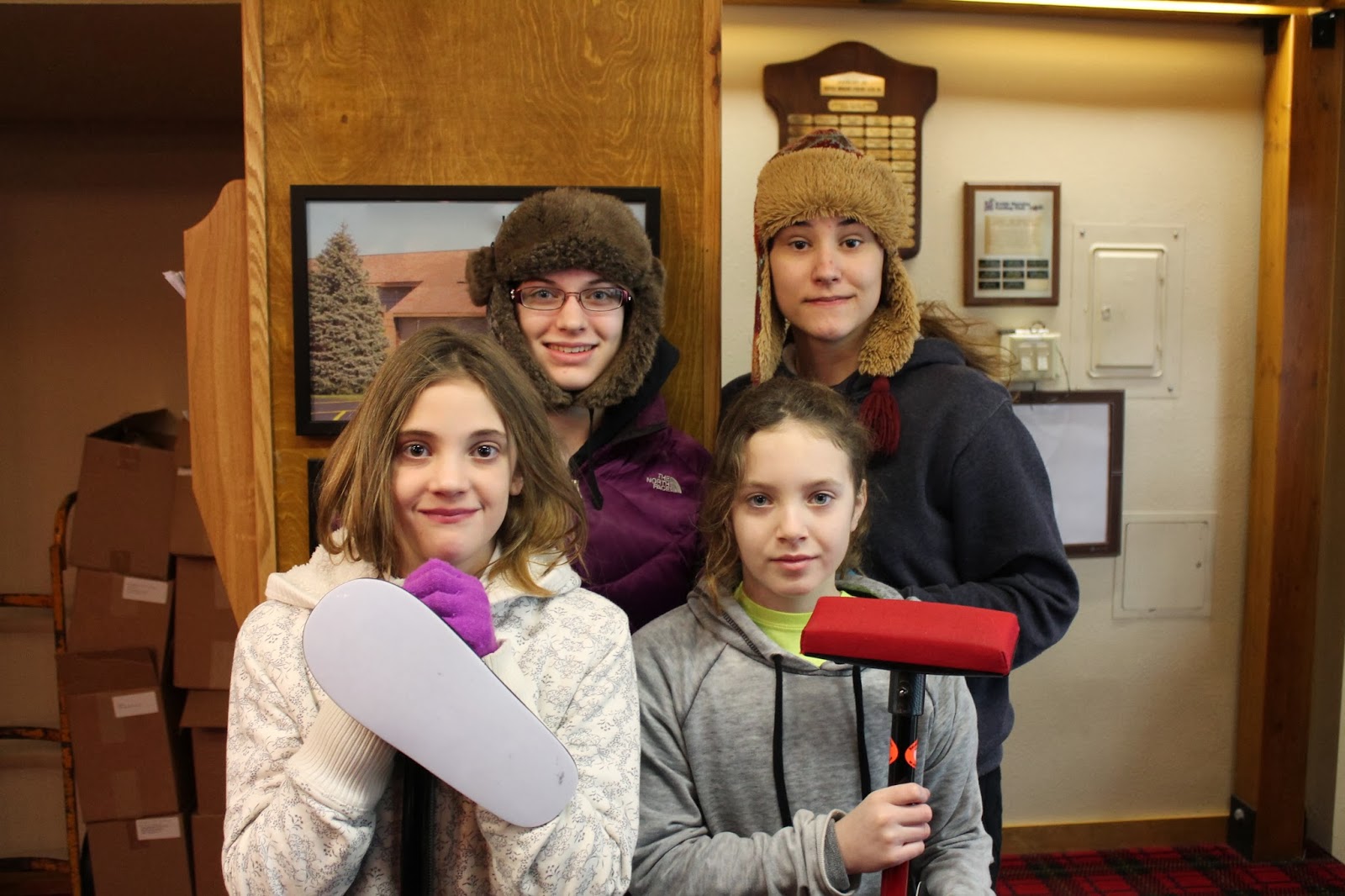 3. Because I had to go back to Home Campus in order to set up for a play rehearsal.  As part of my Performing Arts Guy gig there, I am responsible for shepherding this particular play through every other year, and Saturday morning was the dress rehearsal.  And a good thing I was there, as it turned out that the guy I had lined up to run the lighting was in the emergency room because of a skiing accident.  He will be fine, but it did give me pause regarding my daughters’ burgeoning love of skiing.  Not that I needed further pause.  But I figured the lighting was fairly simple for this play, and I could handle it and still do all the other things I needed to do, chief among them fetching hot cider and coffee halfway through the performance from the coffee shop that had generously agreed to donate them.  So we were still good for Sunday’s show.

4. Kim and I had a date night that night, since it was just the two of us.  I can recommend Monuments Men as a pleasant way to spend a couple of hours if you are looking for a stellar cast playing fast and loose with history.  I have learned not to expect too much from movies set in historical time periods.  It’s supposed to be fun, folks.

5. Promptly at 7:30am on Sunday we got a phone call, which is never good.  Good news sleeps ‘til noon.  Fortunately it had nothing to do with my curlers, who were continuing to have a grand time at their bonspiel.  Unfortunately the guy I had lined up to do the sound was now in the emergency room for something that had nothing to do with skiing but which would still keep him out of the theater that afternoon.  He too is mending nicely, but it did mean a frantic morning of scrambling to find a new sound guy.  Fortunately the theater professor down at Home Campus volunteered to come in to help and even managed to secure a student to run the sound board, so all was well.  There’s no “unfortunately” after that.  Fortunately.

6. And the play went off just fine.  The audience never knows the whole story – it’s one of the iron laws of theater.  I will admit that the hot cider jug was missing a latch and now the passenger side floor of my car is a frozen slick of cider, but when it warms up I suppose I can hose it off.  Not much point in turning the hose on it now, unless I plan on beating the floor mat into submission with an icicle, and even then it will still smell of cider.  Mmmmmm, cider.

7.  We spent most of Sunday night melted into puddles in front of the Oscars – one tired theater guy, two exhausted curlers, and one other parent tired for other reasons, among them having driven up to the bonspiel to see the curlers and then carting all four of them back home.  All I cared about was getting to see Idina Menzel sing “Let It Go,” and so at the appointed moment I was a happy man.  My “Best Picture” count this year was one, which is more movies out of that category than I usually see so I figured I was doing good.

8. The past three days have been rather a blur of trying to catch up on all the work I didn’t get done over the weekend plus the new work that inevitably slides around the protective enchantments warding my private life and then sits there like a hungry beagle begging for attention until I either take care of it or it eats my socks.  I need to work on my sorcery.

9.  Of course it has snowed multiple times here in Our Little Town, because what else would it do this winter, which means getting out the snow blower, which I have not had time to get adjusted.  Schlepping that around the driveway is something of a workout, but I need the exercise.  We’ve also had temperatures ranging from well below zero F to nearly up to the freezing point, just for variety. 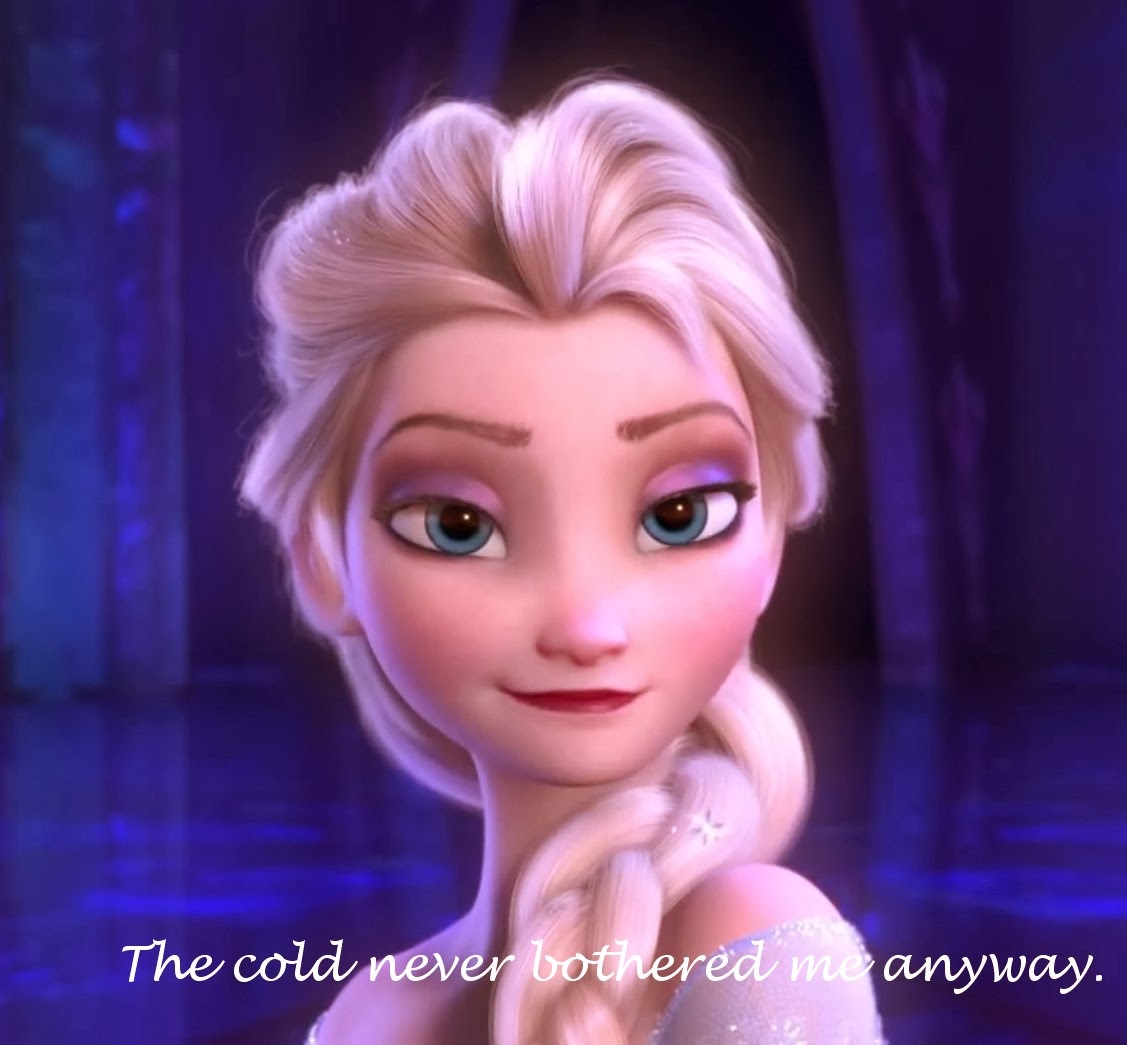 11. We had our final parent/teacher conference at Not Bad President Elementary tonight.  Lauren’s teacher was quite happy with her, and so were we.  It will be strange not heading down to NBPE anymore, after so many years there.  Well, we’ve still got a few months of school left.