It's a Throwback Thursday What Come on a Friday!

Someday I’m going to get the timing down on these things, but that someday is going to have to wait until my world gets less hectic.  So likely never, in other words.  Never is good.

I have spent a great deal of my life in choirs.

It was quite the thing in fourth grade, to be a member of the choir.  You got a red felt vest to wear at the concerts, you got to miss school occasionally, and it was a lot of fun, in part because most of us were in it so you could hang out with your friends, and in part because our teacher made it fun.  Her name was Miss Matthews when I started, but somewhere before I graduated and went to junior high she became Mrs. Beebe.  We all wanted to meet him, but I don’t think we ever did.  I can still remember one concert, toward the end of sixth grade, where we were all utterly convinced that he was there.  “We want Beebe!  We want Beebe!” we chanted.  Thus we learned to handle disappointment, a valuable educational opportunity.

It was less fun in junior high, mostly because the teachers there were not as good.  We didn’t get red felt vests, either.

I continued singing in choirs in college and again in graduate school, where I met some great friends and had some very good times, but the peak of my choral existence was definitely high school.

As with elementary school, this was a combination of the people in the choir and the teacher in front of it.

Dr. Giersch was a dynamo of a man who retired the year I graduated.  He’d been teaching in that school district since the year my dad was born, but he still managed to have more energy than any three of us teenaged singers combined.  He’d greet us with a hearty pound on the back – my shoulder still hurts just thinking about it – and he’d get us to sing things we never thought we’d be able to handle, which we would then employ in odd situations.  People get odd looks on their faces when you show up as Christmas carolers and launch into an acapella 4-part-harmony version of the Hallelujah Chorus.  Dr. Giersch been teaching there long enough to have seniority over everyone, so when we scheduled weekly concerts off school grounds the other teachers could only grit their teeth and put up with it.  I do recall the Spanish teachers trying to stop us one year, but that never amounted to anything.  He outranked them.  He outranked the principal.  He outranked the school board.

But woe betide if he ever got a mistaken notion about you, because it was never going to be fixed.  There was another family with kids in the district with my last name – two girls a couple years older than I was, and a boy a year younger, all of whom resembled us enough that we might well have been related.  We weren’t, at least not to my knowledge, but that never fazed Dr. Giersch.  Despite the fact that he and my family went to the same church and he had known me since I was in kindergarten, he invariably would ask me how the sisters were.  This continued for decades after he retired.  It’s been thirty years since I graduated, and Dr. Giersch is still around.  I’m sure the next time I see him he will ask me about the sisters again.  And I will say, "Fine," as I have learned from experience to do.  It's easier on everyone that way.

You can always tell how a high school views its choirs by how many guys are in them.  In places where choir is desperately uncool there are few if any guys – girls being more mature about such things and better able to withstand the suspicions of uncoolness because of that.  Even uncool guys shy away from such choirs.  In our high school, there were lots of guys in the choirs.  And not just uncool guys like me (hey – I am what I am).  Barry, the captain of the football team was a tenor.  We even had lacrosse players, who outranked the football players on the coolness scale in my high school.

Most of my friends were in the choir.  Most of the women I dated were as well.  We were quite the outfit.

I sang Bass II, which is the lowest part in the choir.  Sometimes we were just called Basses, in which case the Bass I’s were called Baritones.  We referred to ourselves as Men, in contrast to the tenors, though we didn’t say that too loudly around Barry.  Barry was a kind and even-tempered person, but there were limits even so.

In my sophomore year Dr. Giersch decided that we needed photos.  Why he decided this I don’t know, but we dutifully lined up in our robes, carrying our music, and got our photos taken.  So this is me, somewhere around sixteen years old. 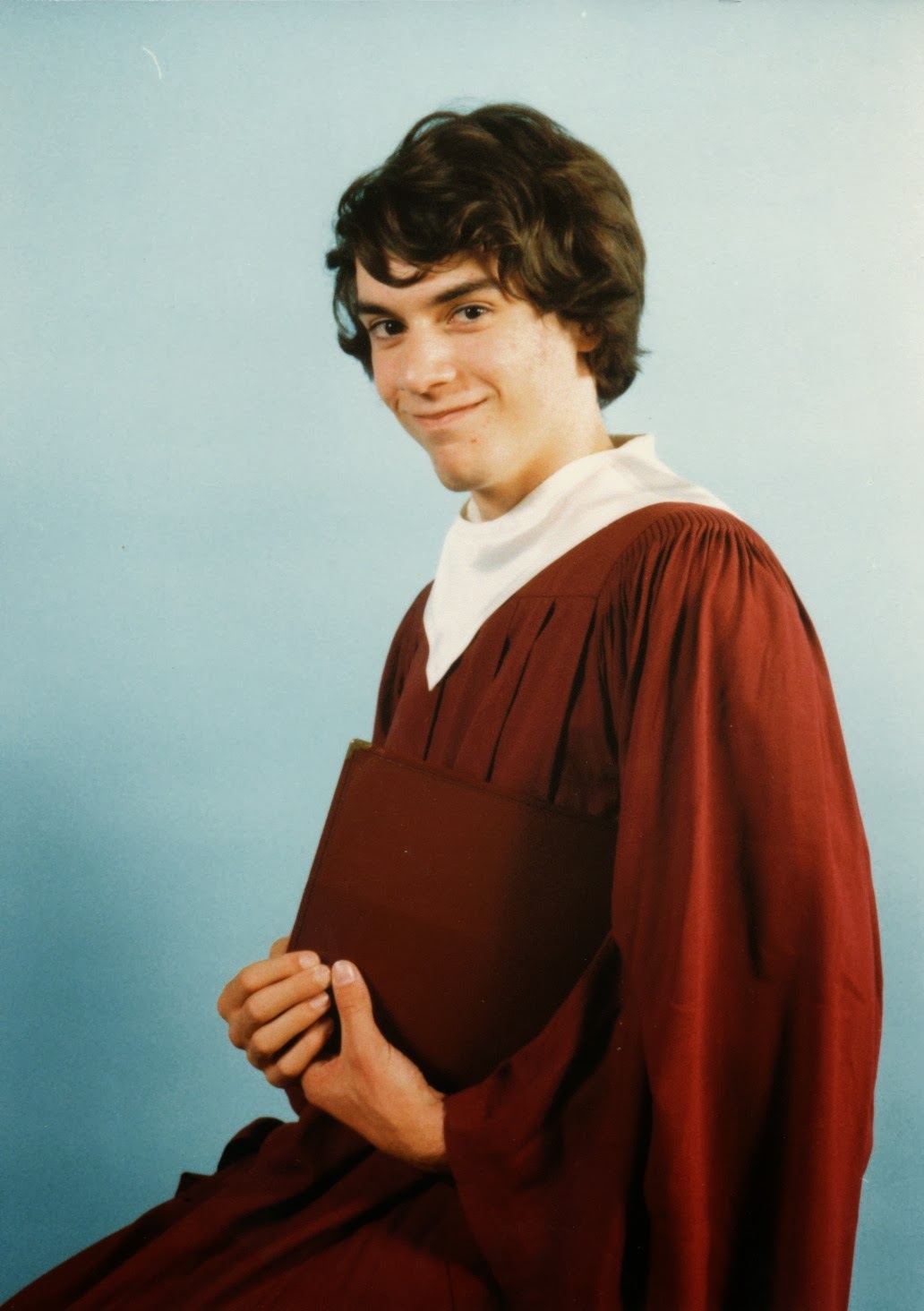 Tabitha has exactly the same expression in her repertoire these days.

It always makes me oddly pleased to see it.
Posted by David at 9:00 PM

I was never part of a choir past grade six when my friend and I specialized in making up new words for songs while standing in the back row. I still can't listen to Downtown without hearing our version. You don't want to know.

In my early twenties I was joined by a couple of friends who were equally talented and formed a singing group called The Outcasts. They Outcasts were often asked to perform at weddings, funerals, and Bar Mitzahs*. I sang and played the five stringed Hawaiin guitar (formerly a six string guitar but one broke. I think it just shows the quality of my musicianship that I could continue to perform under adverse circumstances.) Duane, an ex-drill sargent, was the leader of the group and Charles, in his sixties, provided stability by singing a bar or two behind everyone else. We had a lot of fun and actually got requests to sing at wedding receptions, though for some inexplicable reason never at an actual wedding.


* We were never asked, nor did we ever perform at a funeral or Bar Mitzvah.

Yeah, we had a few alternative-lyric songs back in the day. "Ezekiel Saw de Wheel" is no longer as spiritual as it used to be for me, among others.

Three cheers for the Outcasts! I imagine the receptions were more fun anyway. :)